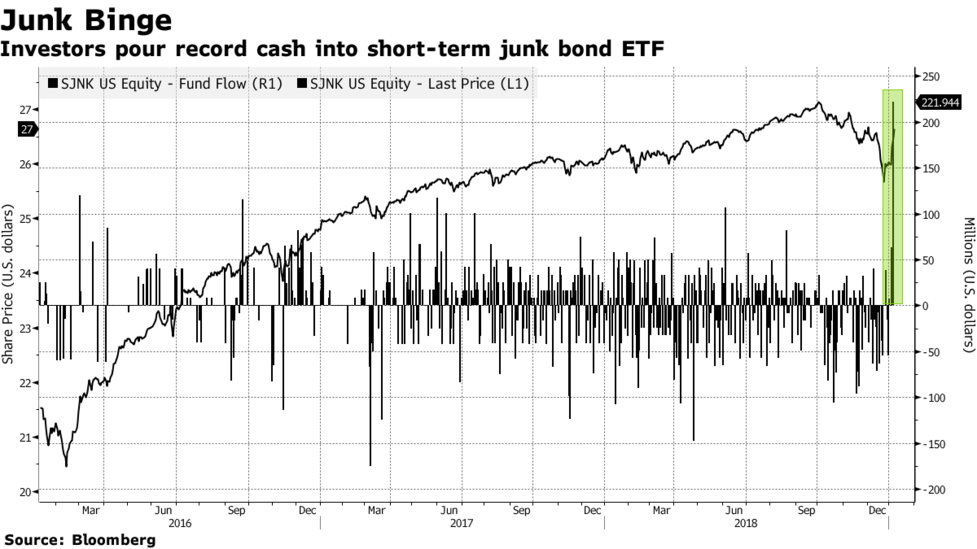 “The number of zombie companies in advanced economies last year stood at 536, or 13% of the total, according to Bank of America Merrill Lynch.”

A September 2018 BIS report wonders whether this is setting a low interest rate trap for policy.

“Lower rates boost aggregate demand and raise employment and investment in the short run. But the higher prevalence of zombies they leave behind misallocate resources and weigh on productivity growth. Should this effect be strong enough to reduce growth, it could even depress interest rates further.”

If loss making and poor credit companies are continually supported then we will likely have more of them. Clearly that is what is happening around the world, and here in the US, the Russell 2000 shows an above average and growing  trend of zombies.

Has the US fallen more deeply into this trap than the global average?

The chart below shows that the number of loss making (or zombie) companies is in an 8 year uptrend, and now around 37% of the index! That is quite an amazing bull market phenomenon.

What would happen to the equity of all these junk credits in a recession? 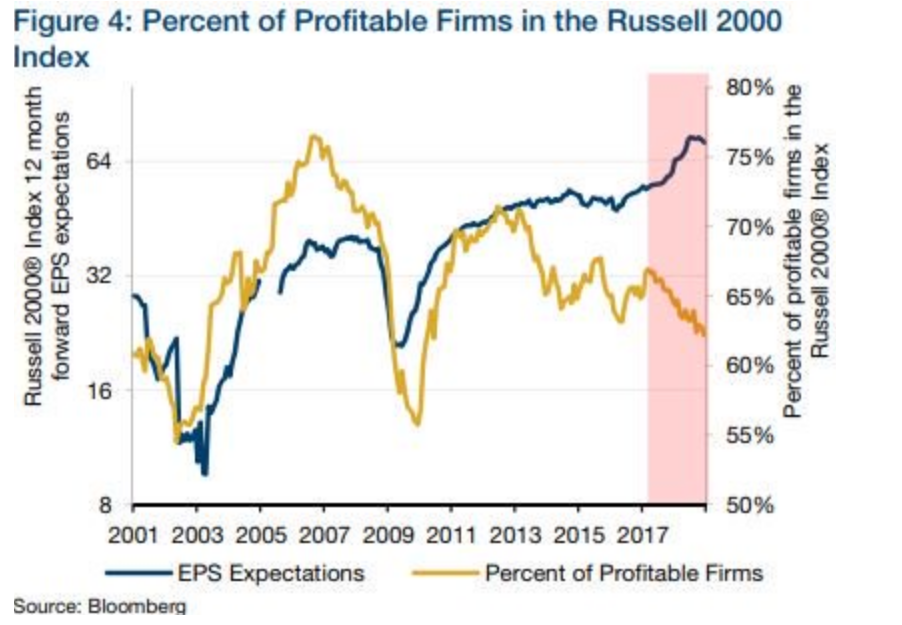 The chart above also shows that even as analysts have taken their earnings estimates ever higher,  the number of profitable firms has continued to decline!

“We are in an economy that all acclaim to be “strong” and “healthy”. Debt is rising, as is GDP and employment. Yet a shrinking proportion of small cap stocks (weighted average market cap is over $2B) actually generate a profit. Let’s restate that, despite the free flow of credit-effluent, despite the incredible boost to GDP of incredible central bank fueled debt, more and more of these companies cannot generate a profit. And if this downturn in the profitable proportion of the index is durable, observe that the peak is lower than prior to the last bust.”

That hasn’t stopped an explosion of corporate debt, which has continued to rise into early 2019. 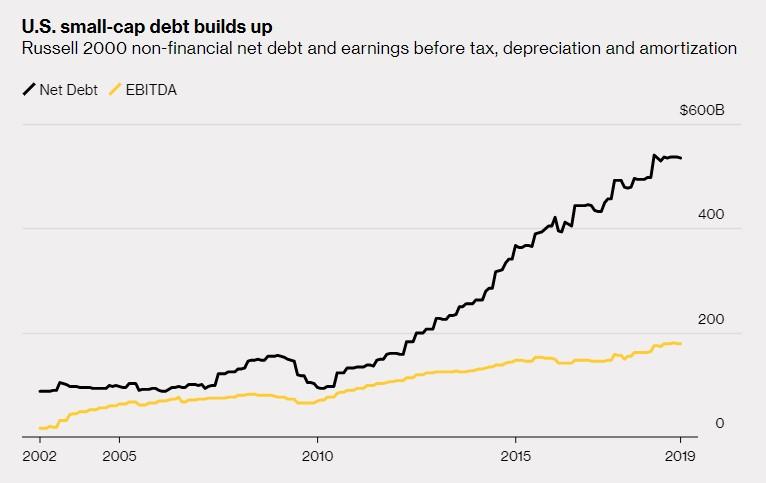 Even in the S&P 500 Index the trend in deteriorating credit has been relentless. BBB is just one notch above junk. 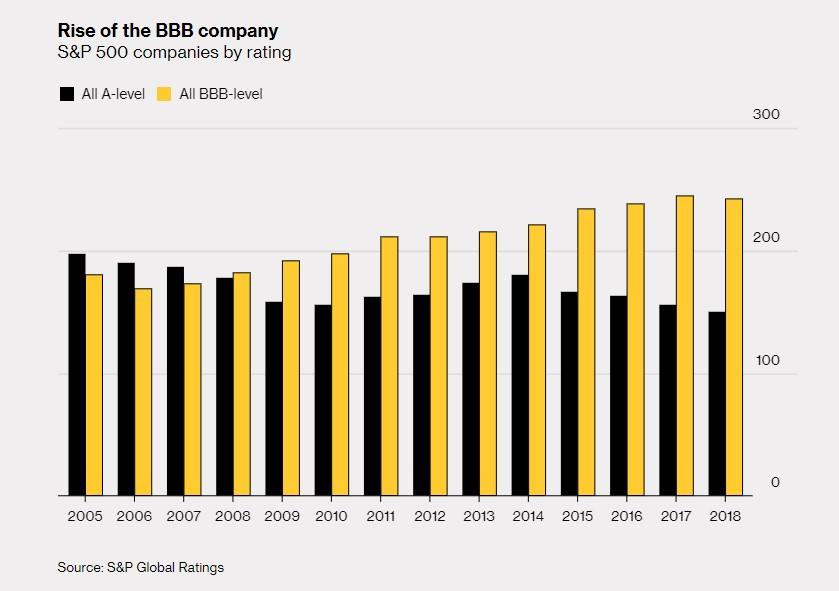 Not only is the valuation of the US at all time extremes, as discussed in my Q1 2019 Review, but the quality of those earnings has significantly deteriorated.

“Our point today is that the Fed and other central banks have caused a misallocation of credit of enormous proportions. The Fed has induced speculators to bid up the shares of money-losing companies.”

The Fed seems set into an institutionalized pattern, which seems unlikely to change any time soon. Tragically, this institutional system has been used in Japan for 30 years and in Europe for the last 10 years. This is no longer in the realm of economic theory as proof of concept is well advanced.

Japan’s interest rates have been at zero for 20 years.

Even with record low interest rates AND massive debt growth AND even huge government stock purchases the Nikkei is still around 50% below its 1989 high!

Japan should be studied very closely because that is the path we are on. This is very different from how US investors think today, and requires new thinking about strategic portfolio structure.

World stock markets, as well as junk bonds, have rallied substantially in 2019 on the shifts in policy from the world central banks starting at the end of 2018. Investors should consider how far this can go given the record of the last 30 years in Japan and Europe.

So far there is very little evidence that the world economy has recovered much from its lowest point in 10 years, as shown in my Q1 2019 Review. Here is an example of current data: 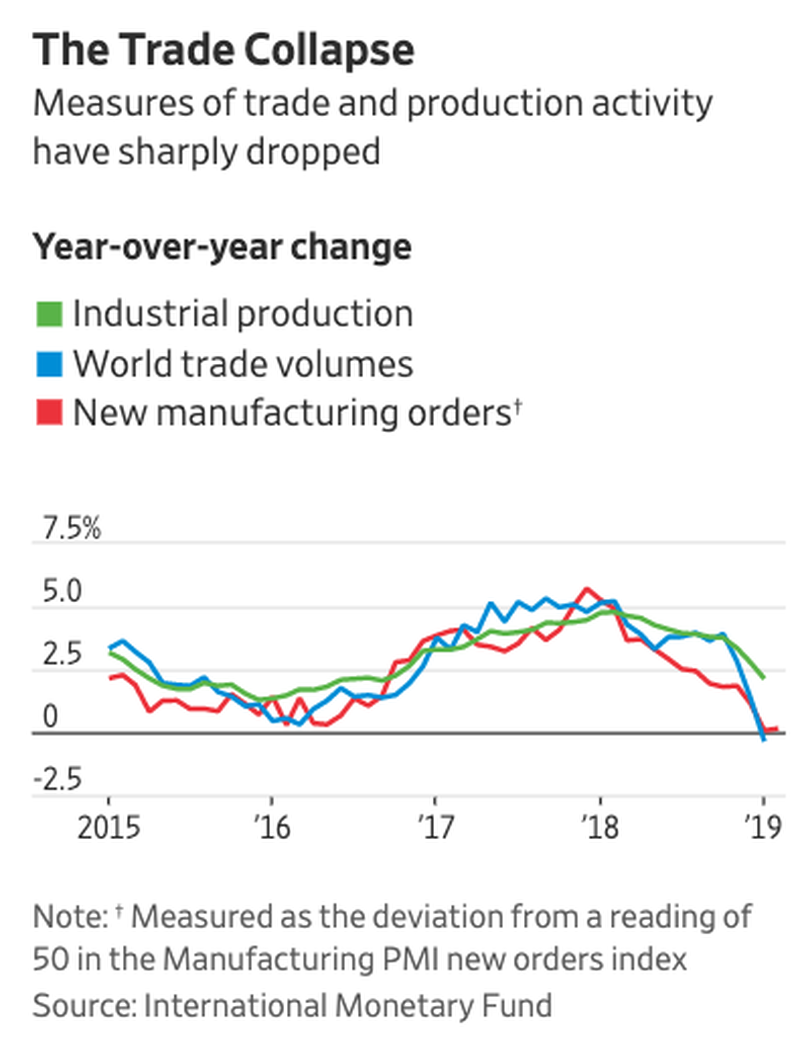 This also comes at a time when one of the world’s largest and most successful investors has a poor long term cyclical outlook for US equities.

The US equity markets have already discounted a great deal from central bank action so far in 2019. However, as for the last 2 peaks in the S&P 500, once again we have negative divergence near the previous highs. 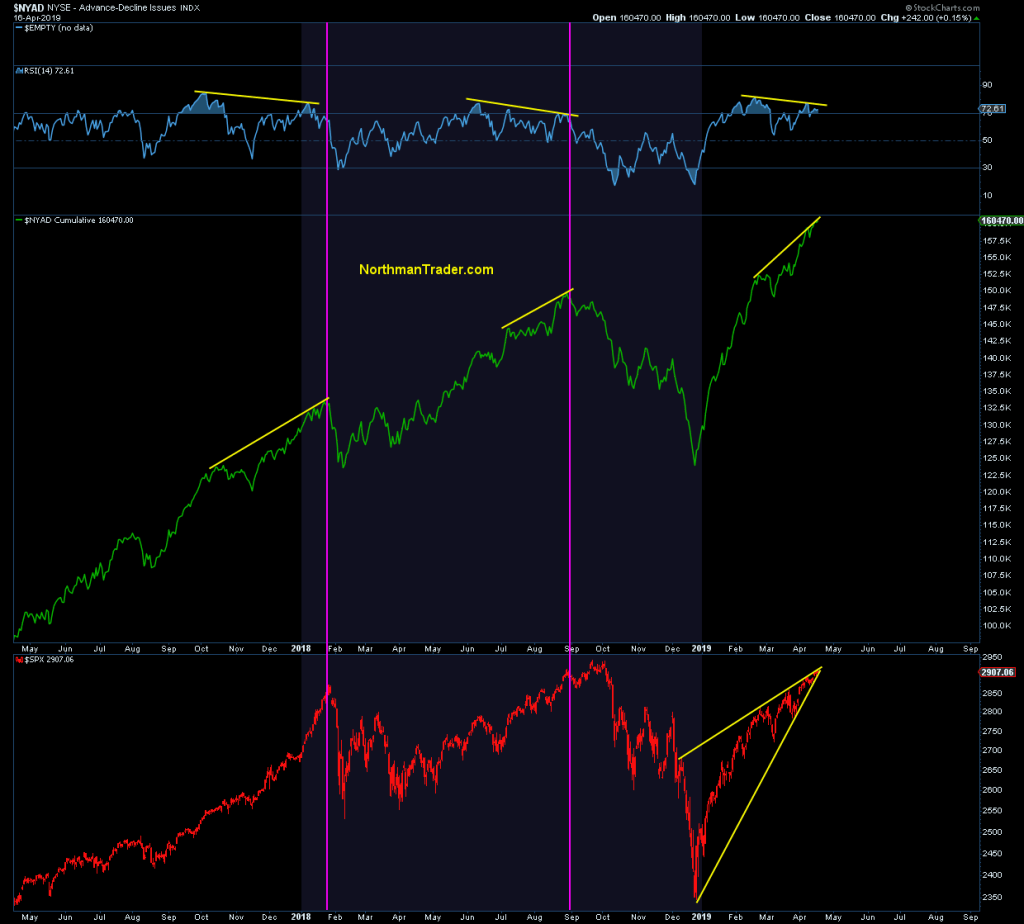 Welcome to an altered state market. This altered state is most likely becoming a new norm, but this has NOT worked out well for equities either in Europe or Japan over recent decades, as discussed in my Q1 2019 Review blog.

Most investors seem unaware of this change in conditions and have not altered their investment strategy to fit the new circumstances. There is no time to lose.