How China Could Change The Global Financial System.

What happens when the old debt starts decaying faster than new sugar shot debt can offset?

“objectives can only be achieved by China replacing the dollar as a medium of exchange.”

This is clearly a time when every investor should make sure they understand their gold strategy. 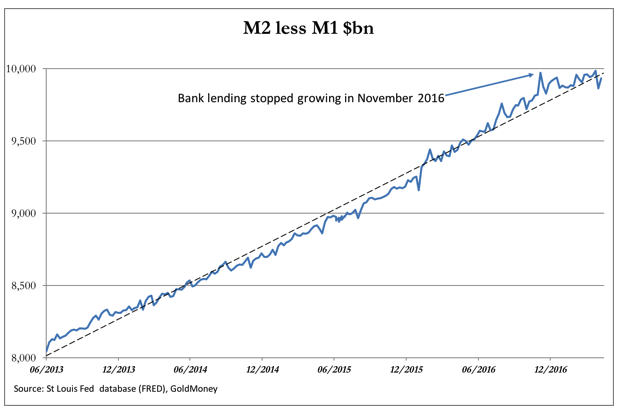 For all the excitement about the Trump election M2 less M1, in other words bank lending, stopped growing immediately Trump was elected. It’s not difficult to see why.

Capital One’s charge-off rates are climbing steeply from Q3 2016. Capital One is big enough to be a good reflection of what is happening nationally.

As discussed last week the wave of Central Bank buying and debt creation can generate new growth effects. However, this is only another sugar shot. What happens when the old debt starts decaying faster than new sugar shot debt can offset?
And bankers themselves have not been as enthusiastic as bank stock prices.

Why Have Bankers Become So Bearish?

Now China has become increasingly concerned about economic stability and in particular the US role in being able to manage that. A recent Chinese government statement put it this way:

“Since China has entered the critical period of economic transformation, it is time to raise financial security and demonstrate a better understanding of the interplay between finance and the real economy.  If the 1997 Asian financial crisis and the 2008 subprime mortgage crisis are anything to go by, then the next cataclysm will come as a result of inadequate risk prevention, swiftly followed by universal economic collapse and resultant woes.”

It is well worth looking at this issue from a Chinese perspective.
“China’s approach is fundamentally different from that of America, which under President Trump appears to be envious of the success of non-Americans producing goods and services for the American consumer. Autarkic America has a GDP of $19 trillion. Eventually, China will have free trade agreements with the rest of the world, excluding for now the EU. On a purchasing power parity basis, this is a market with a GDP of about $70 trillion, out of a world total of about $125 trillion.ii

Already, China dominates world trade. Her own economy is already significantly larger than that of the US on the PPP estimates. While being the largest consumer of raw materials, China also exports more finished goods by value than any other country. As the Asian powerhouse, she has lifted the economies of all the countries on the Western side of the Pacific Ocean, which including her own between them have a GDP of $50 trillion. Her exports into Asia now exceed her exports to the US. Yet despite this dominance, most of China’s trade is conducted in US dollars, something China is bound to change, if she is to contain external economic risk and replace America as the dominant global empire. Both objectives can only be achieved by China replacing the dollar as a medium of exchange.”

Some Russian comments seem to have been even clearer.

This comes at a very interesting juncture in the gold market, which remains the top ranked asset class on my CD Asset model. Furthermore, it seems that in any case the most significant economic factors favoring gold are now back in play. Real interest rates are softening with US economic weakness, and the oil price is in a confirmed downtrend. Here is the interview which describes how these two main factors are the most significant for determining the long term trend in the gold price.

Whether or not the Asians are ready to make a global money play, a number of factors appear to have come together to support the gold price. A gold strategy is a key element of every portfolio.
This is clearly a time when every investor should make sure they understand their gold strategy.