Posted on September 9, 2015 by Chris Belchamber

It is worth spending some time understanding the results from the biggest economic experiment of all time – global money printing to support banks and markets since 2008. This has now reached well into the 10s of Trillions in aggregate across the globe over the last 7 years or so.

Take a good look at the charts above. 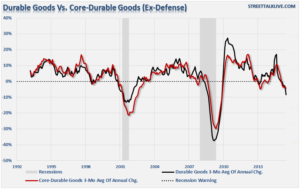 Just in the US, QE has exploded to over $4 trillion. This, along with many other measures, was supposed to provide a huge boost to both growth and inflation, but it just hasn’t happened.

If you add growth and inflation together you get nominal GDP growth shown in the second chart. This is the best single measure of the success of QE, and the Fed’s ability to reflate the economy.  However, the second chart shows that nominal GDP has rapidly collapsed to its lowest level since the 1950s! Exactly the opposite result. So the experiment is failing spectacularly.

As previously described, what QE has done 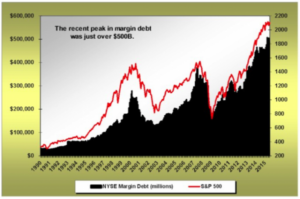 is enormously boost financial assets. However, can stock prices forever diverge from economic growth and inflation by being floated on a sea of printed money with the help of financial engineering?

This Guardian article suggests that the central banks should not even try as any attempt will ultimately prove to be futile.

However, in most Wall Street and Federal Reserve circles they apparently don’t see this effort as “Mission Impossible”, or perhaps they do not know what else to do. The common response is to keep trying. For example, here is the opinion of Chief Economist Willem Buiter of  Citibank.

“We expect to see QE #N, where N could become a large integer, as part of the monetary policy response in the US and the UK, and QEE2 in Japan.“

More of what has already failed.

In the middle of all this, somehow the 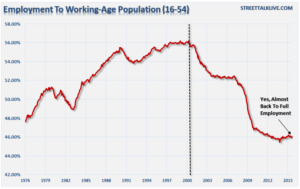 Federal Reserve has been promoting the idea of raising rates this year. According to the view from Fed the economy is doing well enough to actually tighten policy. Undeterred by 6 consecutive years of having incorrectly held a similar view it seems to be stubbornly sticking to what its models say. Could it possibly be time for a review?

However, it seems that the Fed is becoming increasingly isolated as most of its peers seem to be taking a diametrically opposite view, including the IMF, and now the World Bank chief economist who warns that the Fed risks triggering “panic and turmoil” in emerging markets if they raise rates in September.

Adding his name to the list is Larry Summers, who chimed in yesterday with an article simply titled “why the fed must stand still on rates”.

Even J P Morgan seems to have stepped back from the Fed narrative.

And Goldman Sachs says the September rate hike is not even close.

What is an investor to do when the 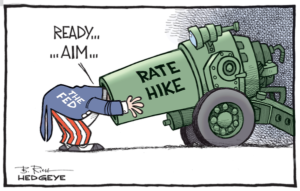 Federal Reserve seems so much at odds with so many of its peers, and is engaged in an unsustainable “Mission Impossible” of perpetually inflating financial assets even as they continue to diverge from the underlying economy? If the Fed is tasking itself with holding asset prices at high levels, then raising rates when the economy is weak and slowing, with margin debt near all time record levels seems like a strange strategy to a growing and influential majority.

Here is a great list of charts showing a range of key indexes of how the economy is doing. You can decide for yourself if now seems like a good time to raise interest rates.

ECRI has a great track record on calling

US economic cycles. In the Bloomberg interview yesterday, in the link below, the current situation looks very clear. The US economic cycle peaked around 9 months ago and since then then trend has been firmly down.

The Federal Reserve only has three more meetings this year, so it is running out of opportunities to deliver its repeatedly stated intention to raise rates this year. It faces the dilemma of a potential policy error by raising rates, or once again trying to quietly step back from its narrative that all the trillions of QE and 7 years of zero interest rates still isn’t quite enough, but never mind, following this “transient” period their consistently wrong forecasts assure them that all is well.

It remains crucial to position according to real economic cycles, with techniques for negotiating high and erratic volatility.