Posted on November 7, 2017 by Chris Belchamber
Some pictures make you stop and think. Last month King Salman became the first king of Saudi Arabia to travel to Moscow and he bows to Putin. He also brought key advisors with him to make bilateral deals.
Clearly there is a strengthing alliance between these two countries that produce around 25% of the world’s oil.
Saudi Arabia seems to be deepening its ties to Asia. Earlier in the year King Salman also visited President Xi Jinping in China to sign $65 billion in deals. 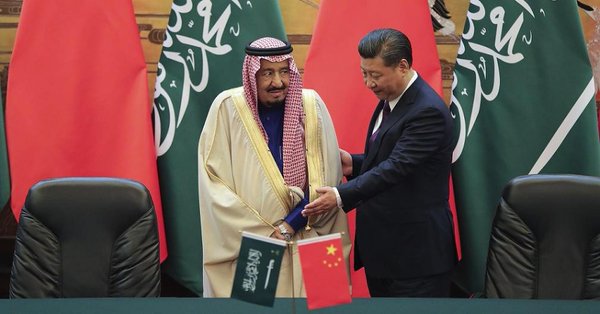 https://www.reuters.com/article/us-saudi-asia-china/china-saudi-arabia-eye-65-billion-in-deals-as-king-visits-idUSKBN16N0G9
A cornerstone of the dollar’s currency reserve status is the Petro dollar agreement, made over 40 years ago. Saudi Arabia agreed to only receive US Dollars for its oil. This was a key support for the US Dollar system. However, it seems that alliances are changing. China is today a different economy than 40 years ago and in addition, it is now  Saudi Arabia’s largest oil customer. Clearly there is an important subtext to the latest developments.

Alasdair Mcleod puts the pieces together:

For a considerable time, China has followed a policy of replacing the dollar as its settlement currency for the purposes of trade. After all, China dominates international trade, and on a purchasing power parity basis, her economy rivals that of the US, and if it hasn’t done so already will soon overtake it. From China’s point of view, being forced by her trading partners to accept and pay in dollars is an irritating anachronism, a hangover from American imperialism.

The purpose of this article is to put the proposed oil for yuan contract, which has been planned for some time, into its proper context. It requires knowledge of the history of how China’s policy of internationalising the yuan has been developed, and will be brought up to date with an analysis of how the partnership of China and Russia is taking over as the dominant power over the Eurasian land-mass, a story that is now extending to the Middle East.

This fulfils the prophecy of the founder of geopolitics, Sir Halford Mackinder, made over a century ago. He described the conjoined continents of Eurasia and Africa as the World Island, and that he who controls the Heartland, which lies between the Volga and the Yangtze, and the Himalayas and the Artic, controls the World Island.ii The Chinese-Russian partnership is well on its way to controlling the World Island, including sub-Saharan Africa. We know that successive Soviet and Russian leaders have been guided by Mackinder’s concept.