The Cyclical And Debt Forces Pressuring The Fed. And Now QT1?

Posted on September 25, 2017 by Chris Belchamber

Has hubris taken over the Fed narrative? “Fed’s Yellen expects no new financial crisis in our lifetimes'”

The Fed keeps changing tack from hawkish to dovish on rate rises.

The frequency of these changes seems to be increasing even as US equity market volatility crashes to new all time lows. 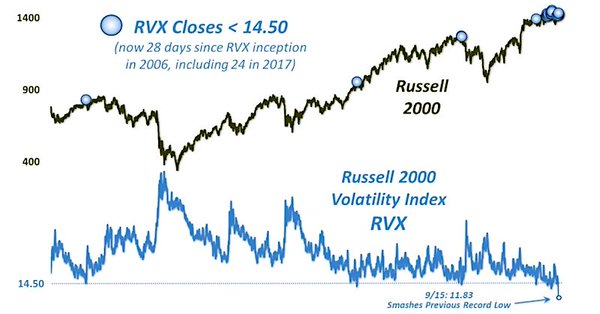 The volatility has to go somewhere, and we see it clearly in the interest rate and gold markets, as the Fed lurches between its narratives on how fast to raise rates. 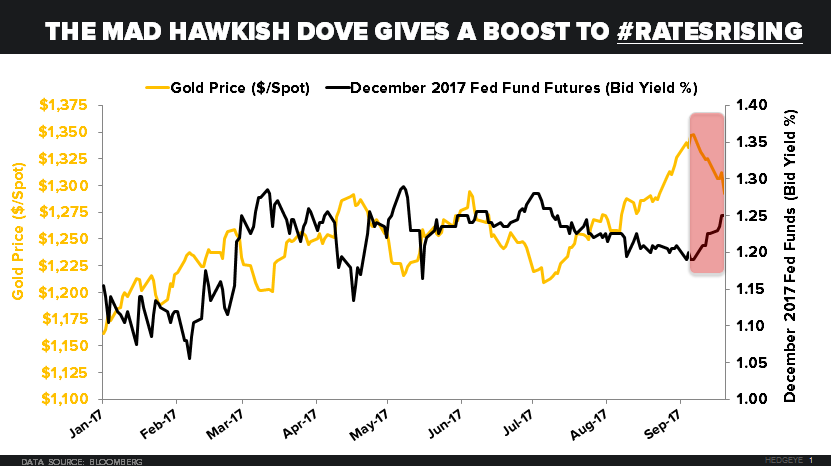 The chart below shows the famous “Dot Plot” of Fed board members interest rate forecasts. While the market has continued to rightly ignore the level of the Fed’s forecasts (the Fed has been too high for 8 years now!),  the market still dances to the Fed’s tune in the short term as the Fed’s actions clearly do have short term impacts.

​
The fed’s main narrative is that it has done a great job since 2008 and all is well. This optimism is obviously not credible given the Fed’s terrible forecasting history and the markets ongoing disregard for the levels of the Feds forecasts. So what is the problem that the Fed is facing, and why does it change tack with such astonishing frequency?

Amongst the most consistently accurate forecasters, to my knowledge, are Hedgeye and ECRI. They are once again not far apart. Below ECRI explains that the inflation cycle has clearly already turned down, and shows no sign of a durable reversal. At the same time the economic growth up cycle is now about as good as it can get. If this is correct, the Fed needs to tread very carefully. While its credibility requires continued “normalization” (interest rate rises and QE paydown decribed below) from all the post 2008 crisis measures, if it goes too fast, and the economy is indeed fragile, the Fed risks the collapse of far more than just its credibility.

“What does work is the Future Inflation Gauge (FIG), a cyclical leading indicator of inflation. Over a year ago it correctly nailed the reflation call when markets were worried about deflation. Then it turned down, anticipating the 2017 inflation downturn that has so many flummoxed, including Janet Yellen.” 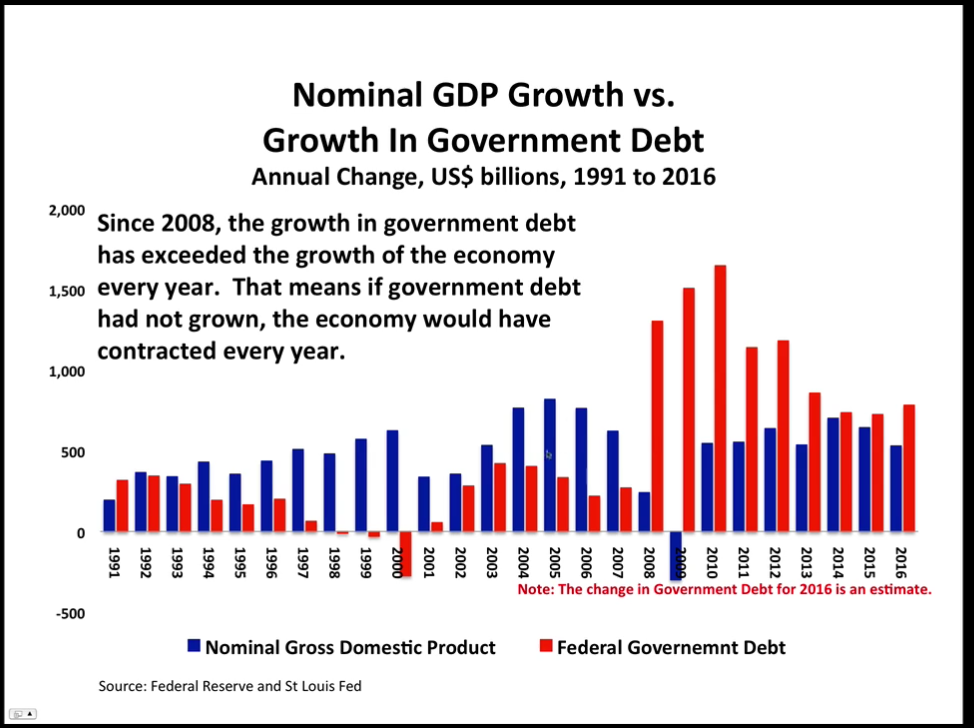 “Here’s the problem: the national debt is growing MUCH faster than the US economy. In Fiscal Year 2016, for example, the debt grew by 7.84%. Yet even when including the ‘benefits’ of inflation, the US economy only grew by 2.4% over the same period. In other words, the debt is growing over THREE TIMES FASTER than the economy. This is the opposite of what needs to be happening.

What’s even more disturbing is that this pedestrian economic growth is happening at a time of record low interest rates.

Economists tell us that low interest rates are supposed to jumpstart GDP growth. But that’s not happening. If GDP growth is this low now, what will happen if they continue to raise rates? (And by the way, raising interest rates also has the side effect of increasing the government’s interest expense, essentially accelerating the debt problem.)”

The calculus of the debt machine is getting problematic.

This is complete nonsense. They’ve spent eight years saying that quantitative easing was stimulative. Now they want the public to believe that a change to quantitative tightening is not going to slow the economy.

They continue to push that conditions are sustainable when printing money, but when they make money disappear, it will not have any impact. This approach falls down on its face — and it will have a big impact.

Markets continue to not be fully discounted because they don’t have enough information. Contradictions coming from the Fed’s happy talk wants us to believe that QT is not a contractionary policy, but it is.

My estimate is that every $500 billion of quantitative tightening could be equivalent to one .25 basis point rate hike. The Fed is about to embark on a policy to let the balance sheet run down.

That would be the equivalent of half a .25 basis point rate hike in each of the next two years in addition to any actual rate hikes.

While they might attempt to say that this method is just going to “run on background,” don’t believe it.”

Has hubris taken over the Fed narrative? “Fed’s Yellen expects no new financial crisis in ‘our lifetimes'”

This certainly Sounds like overconfidence from Chair Yellen.  Fair enough, perhaps, as this is a narrative after all. However, the actions are far more hesitant. In reality the confidence is not there. The back ground is far more fragile and the Fed most likely knows it. At least I hope so.  Otherwise, the Fed could be heading for an accident and Rickards will likely be right and QT1 will quickly need to be reversed as all the central bank emergency measures could turn out just to be a temporary relief.