“The Fed is perpetuating a promise that stocks can’t go down.”

“The problem arises because the Fed, like other major central banks, has now become a creature of financial markets rather than a steward of the real economy. Today’s Fed inherits the deeply entrenched moral hazard of the Asset Economy. The longer the Fed remains trapped in this mindset, the tougher its dilemma becomes – and the greater the systemic risks in the financial markets and asset-dependent US economy.”

“ignorance is willful…questions not tolerated…..binary judgement of a fundamentalist religion….dark ages of finance allow no such light”

Dr. Michael Burry of “The Big Short”, speaking on economic policy 14 minutes into the video below.

“Essentially central banks, by unfairly inflating asset prices have compressed risk like a spring to unfairly tight levels. Unfortunately, the market is aware the price of risk is not correct, but they can’t fight it, and everyone is forced to crowd into the same trade. By manipulating markets they have also reduced investors’ inherent conviction by rendering fundamentals less relevant.”

“..now the investment banks – especially those who were bailed out and were the biggest beneficiaries of QE such as Citigroup – admit central bank quantitative easing failed.” 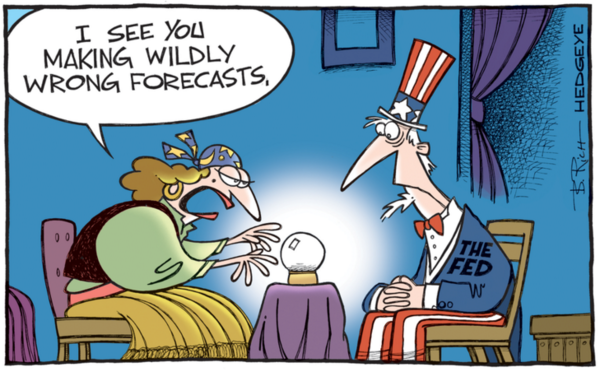 Long term investment success comes from understanding when you are in an investment crisis before it hits. Yet most market participants seem to have become obsessed with a short term casino of distortions orchestrated by intellectually bankrupt policy makers.

Investors have already been through two major market bubbles in the last two decades, so it should be readily apparent that we are now once again at a critical stage. Clear independent thinking has become essential for long term investment survival, let alone success.

There are two very key points that every investor needs to understand about both the economy and markets to have any chance of understanding and interpreting the current investment landscape.

As in previous bubble periods very few investors understand what is really going on, as is well reflected in the recent movie “The Big Short”.  To a great extent this is part of the difficulty with bubbles perpetrated by policy makers. The broken narrative is constantly informing people that all is well. However, what a broken narrative really means is purposeful misguidance. 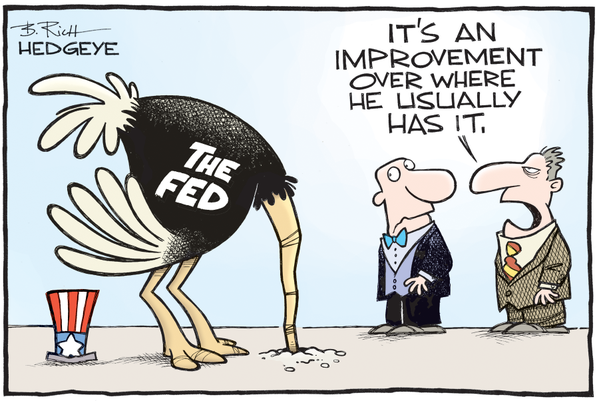 A long term winning strategy requires that investors understanding these points, stay with an appropriate low risk long term strategy and even ignore short term performance within reason. Not easy for most investors, but occasionally essential to maintaining long term prosperity.

More explanation follows but essentially the chart below shows the credit “Catch 22” that the Fed’s model doesn’t even factor in! Essentially, the economy needs more credit growth to grow, but the economy already has too much credit to finance even at zero interest rates! However, if credit growth stalls then there is no chance of growth. 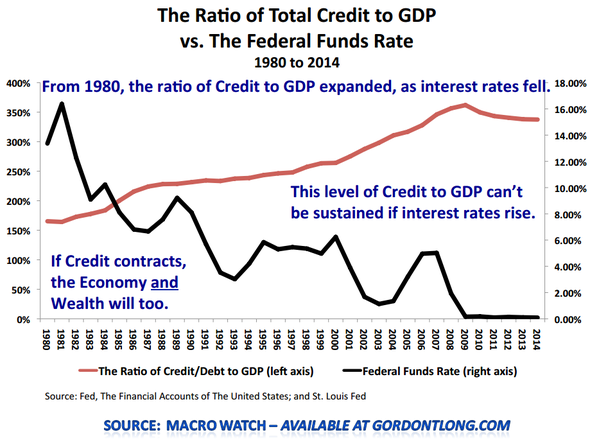 All an investor has to do to figure out the economic problem is find people with a track record of successfully forecasting the economy. There are a number of people who have clearly achieved this status and they all see trouble ahead.

Aside from Keith McCullough, Stephen Roach, and Michael Burry above, Steve Keen not only predicted the crash of 2008, but he has also done more than anyone else to explain why this was so predictable.  He is the author of “Debunking Economics”, which rigorously exposes the logical flaws in the key concepts of conventional economics.

After last weeks interest rate rise he explains why the Fed’s models are still wrong , and what this means for the economy next year.

The dismal level and direction of the economy

Unless you pay attention to successful forecasters, you are essentially defaulting to the least successful forecasters of all – the Federal Reserve and Wall Street consensus forecasts. The chart below shows that on average these “experts” have missed badly on the high side for 6 out of the last 6 years! Currently it looks like 2015 will be the biggest miss yet as GDP growth seems likely to come in below 2%. Just as the Fed decides that now is the time to raise rates! 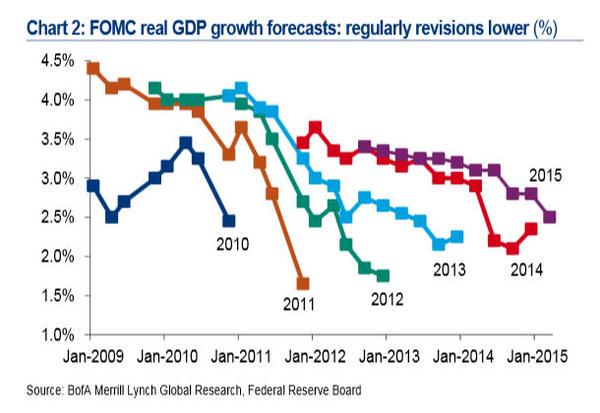 Strangely the most consistently accurate read on the US economy comes from the Fed’s own Atlanta branch. Guess what? The latest read on Q4 2015 is once again far below consensus as shown in the chart below.

Another piece of the Fed’s own data also seems to have been ignored in last week’s rate hike decision. The Chicago Fed’s national activity index has just plunged to 6 month lows!

Meanwhile the world economy is in a clear downtrend. Here is the latest data from Credit Suisse. 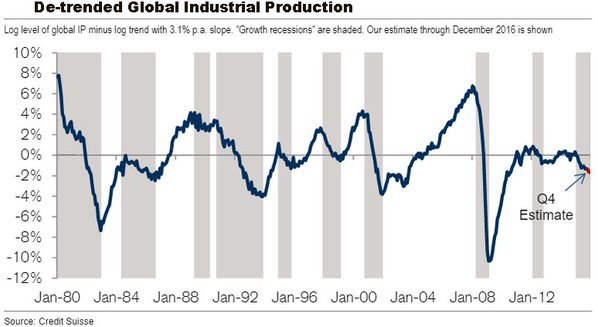 One of the most powerful recession triggers has now turned. Of key importance to equity investors. 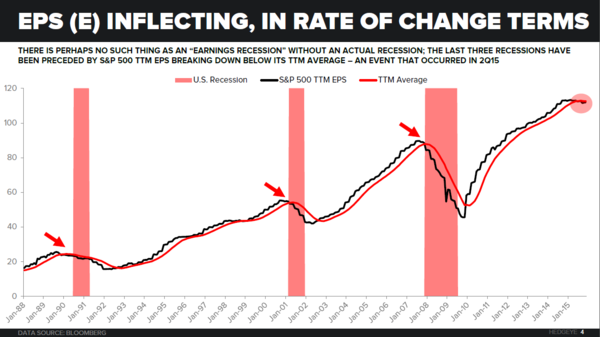 The Commerce Department has just released data showing the worst YOY growth in consumer spending since May 2013.  A reading below 3% corroborates the weakest YOY nominal GDP growth since the 1930s depression, 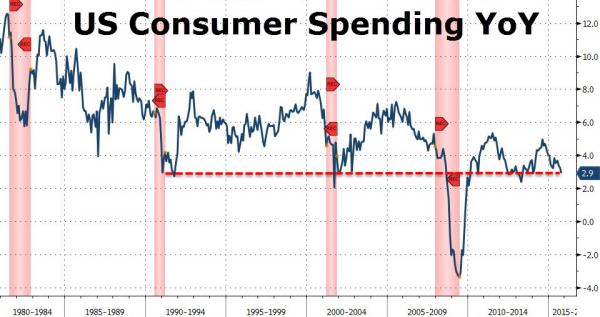 Keith McCullough’s Hedgeye has one of the best forecasting records around and here he explains why the probability of a 2016 recession is rising fast – Three Signs Of Coming Recession.

What are the medium term market risks?

Forecasting when a bubble will implode is a challenging task but Mark Spitznagel has done some very good analysis that suggests that all the conditions are set and an implosion is no longer a tail event in probability terms.

The highest equity market valuation ever?

Investors should normally require some discount when the risks are unusually high. No matter how bad the economic data, if equity valuations are cheap enough they might still be a good buy. Unfortunately, we find that on some key measures valuations are at all time record highs! Even higher than at the peaks of the 2000 and 2007 bubbles! 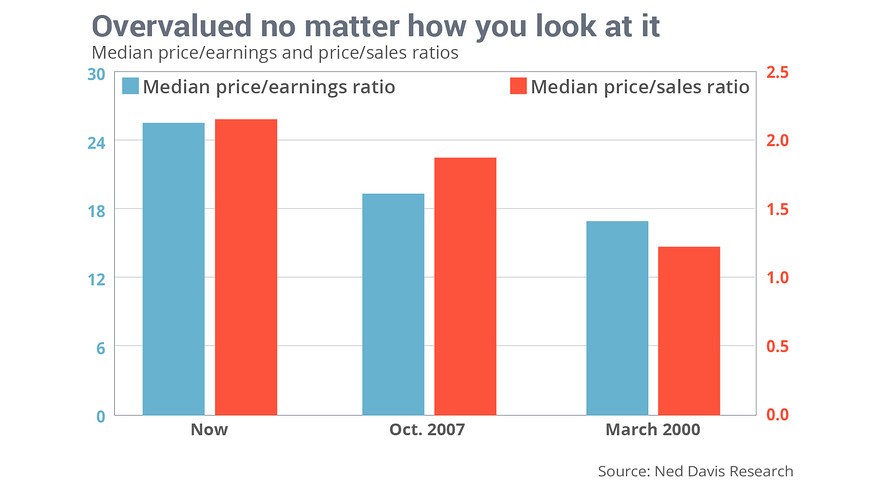 So let’s summarize the background for today’s markets from what has been discussed above and in recent weeks in these notes: 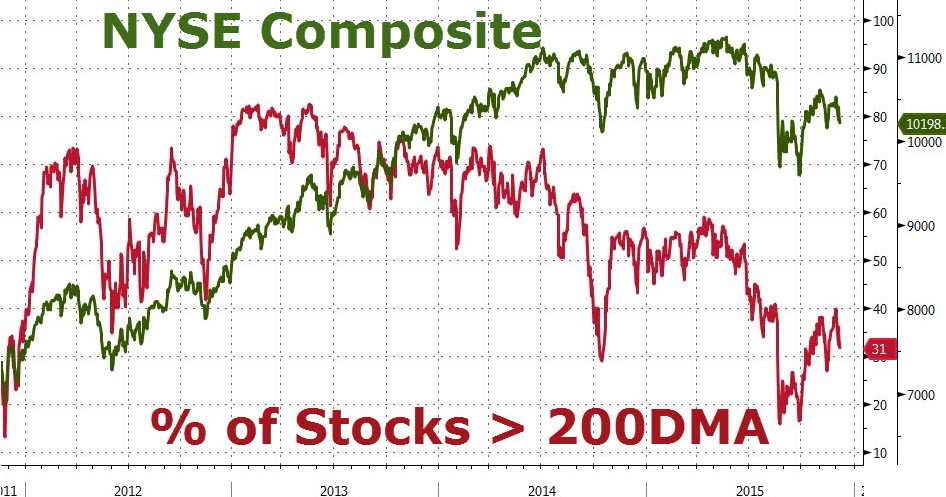 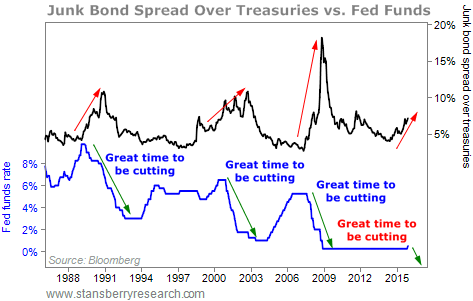 7. The flattest Treasury bond market yield curve since 2008, reflecting the weakest economic/inflation outlook since then. 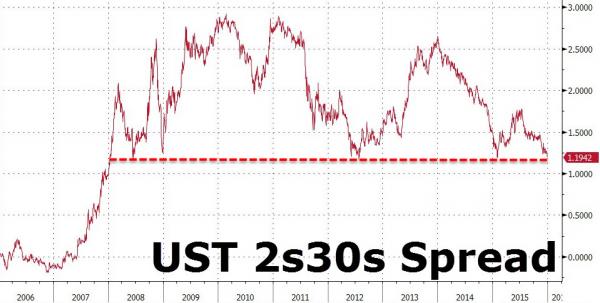 8. Meanwhile the Comex Gold market has less and less link to actual physical gold transactions.  Comex still sets the paper price, but a few statistics show the dwindling level of both registered gold and delivery that remains. The open interest to registered gold ratio suggests a disconnected relationship between paper prices and physical gold transactions.

The chart below shows the astonishing ratio between futures positions and registered gold available for delivery. Genuine markets with the integrity to enable natural price discovery don’t usually behave like this. 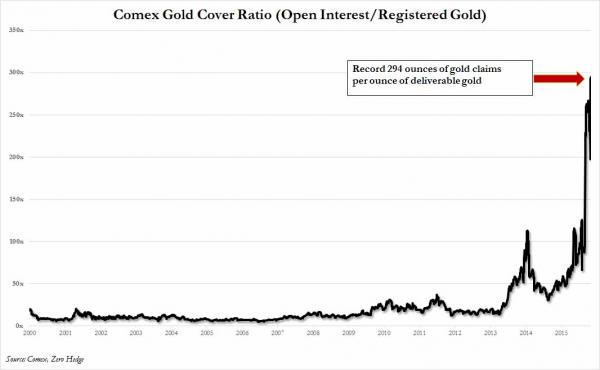 So in summary the S&P 500 rise and Fed interest rate rise say one thing. Then almost all the data and just about every other market indication says the diametric opposite. It seems there is some clear incompatibility. It is highly probable that the price behavior of the S&P 500, and the interest rate increase are inconsistent and unnatural developments.

Is there a core problem that, if addressed, could change all this? If so, why can’t we do that?

If we don’t change the way money is created and distributed, we change nothing – Charles Hugh Smith

Conclusion is a question and a choice

Should investors celebrate the S&P 500 somehow getting close to unchanged over the year as a triumph of economic policy’s ability to support the S&P 500’s price level no matter what? Is long term wealth and a healthy economy now assured indefinitely by price engineering for the first time in history?

Or are investors with high equity allocations taking an intolerable gamble reflecting the worst long term fundamental investment thesis in history, based on a wild theory that bubble cycles have been fixed forever?

Right now, investors need to be very clear about the choice they are making and how to resolve one of the most difficult investment puzzles they have been confronted with.

It is only through deep independent thinking and preparation that investors will be able to navigate the fallout with a long term winning strategy. Investors may also need to understand that the right strategy needs long term cycle understanding and often means accepting small short term losses before winning big.

“The Big Short” provides an excellent guide to what it takes to go through and succeed  over a whole bubble cycle.