Q1 2016 Investment Performance. How And Why CBIM Is Different. Be Clear About The Investment Challenge.

Posted on April 7, 2016 by Chris Belchamber
CBIM out performance in Q1
Portfolio volatility less than 25% of US equities
Slight Negative correlation to US equities
Yet Most Active Managers Just Had Their Worst Quarter In 18 Years
Central Bank failure a game changer for most
European banks crashing
Yet US intervention has remained perversely more successful
Another angle on central bank failure
Car sales rolling over
Fed’s numbers show worst labor market since 2009
Solving for the real underlying cycle through interventions and misguidance
———————————————-
CBIM out performance in Q1 of all main investment benchmarks
CBIM achieved significant outperformance in Q1 2016. The chart and data are shown below. 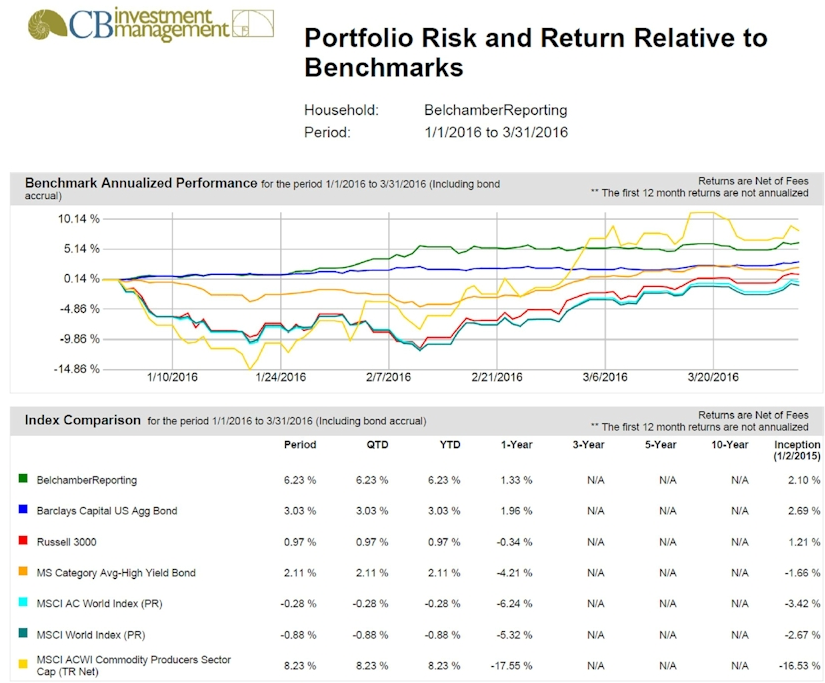 http://chrisbelchamber.com/track-record/
Portfolio volatility less than 25% of US equities
While low volatility is a constant component of CBIM performance  it was extremely low in Q1 2016. Volatility of aggregate portfolios had only a 4.66% standard deviation, which compares with over 22% on the Russell 3000. 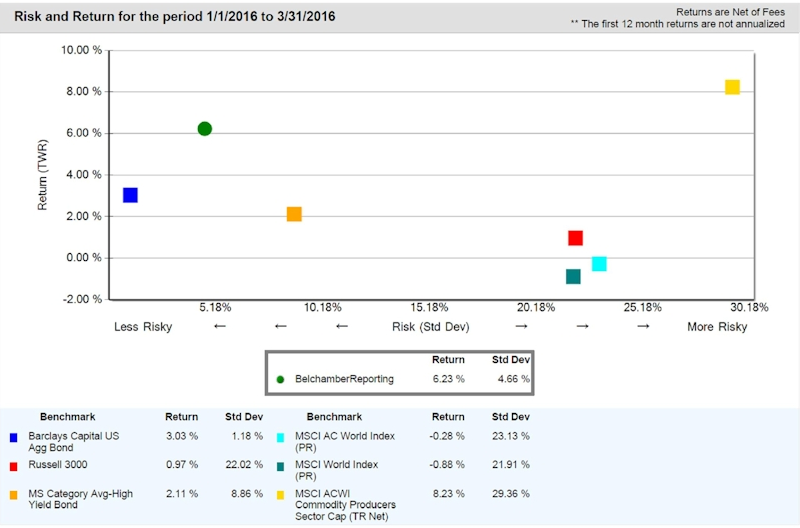 Most Active Managers Just Had Their Worst Quarter In 18 Years
“According to BofA’s Savita Subramanian, just 19% of funds outperformed the S&P 500 in the 1Q. According to the bank, this was the the lowest quarterly hit rate in our data history spanning 1998 to today. The average fund lagged by 1.9ppt, marking a record spread of underperformance.”
http://www.zerohedge.com/news/2016-04-06/active-managers-just-had-their-worst-quarter-18-years-heres-why
Central Bank failure a game changer for most
Most likely outperformance depends so much on the perception of central bank interventions. Yet now the central banks have begun to struggle. Over the last year the most aggressive central bank intervention has been in Europe and Japan. However, this now looks like a dismal failure as this has not been able to stop a significant equity bear market over the last year in either currency block.
Should US investors still believe? 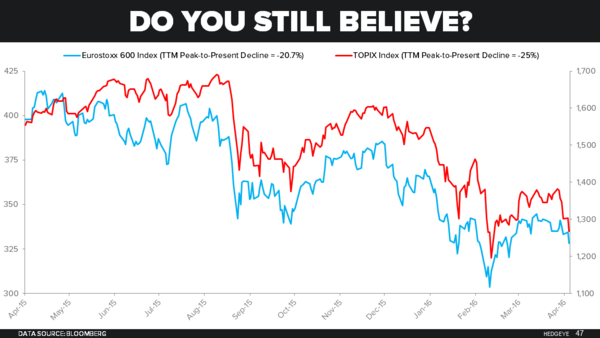 Indeed even with NIRP in Europe and Japan we have recently seen a stronger yen and euro relative to the dollar.
European banks crashing
In theory intervention should help the banks, but in practice …..

Yet US intervention has remained perversely more successful
“US equity markets rebounded by the greatest amount ever in Q1 to end the quarter with a “keep the dream alive” positive return. This ‘central-bank’-sponsored bounce occurred as S&P 500 earnings expectations plunged 9.6% – the biggest quarterly collapse since Q1 2009.”
“This quarter marked the 10th time in the past 12 quarters in which the bottom-up EPS estimate decreased during the quarter while the value of the index increased during the quarter.”

http://www.zerohedge.com/news/2016-04-02/chart-quarter-nothing-else-matters
Another angle on central bank failure
At some point investors need to consider whether central bank failure is becoming so obvious that perhaps it is purposeful.
http://www.zerohedge.com/news/2016-04-07/lost-faith-central-banks-and-economic-end-game
Jim Rickards explains how this fits in to the obvious objective he sees not far down the road.
Car sales rolling over
Meanwhile we continue to point out multiple signs of a weakening economy. March car sales were a case in point.

Fed’s numbers show worst labor market since 2009
Then there is the Fed ‘s own “Labor Market Conditions Index”, which has begun showing the worse turn since 2009.

http://www.zerohedge.com/news/2016-04-04/fed-sees-labor-market-worst-2009
Solving for the real underlying cycle through interventions and misguidance
It is crucial for investors to be aware of the risks and manage them through interventions and policy misguidance. Finding appropriate solutions has never been more difficult or important. The challenge is to find strategies that don’t get blown off course, yet stay adaptive to real underlying cyclical forces.
This entry was posted in Market Notes. Bookmark the permalink.