7 Red Flags For US Equities

John Mauldin’s weekly article, http://d21uq3hx4esec9.cloudfront.net/uploads/pdf/131102_TFTF2.pdf, entitled “Bubbles, Bubbles Everywhere” is very well timed. There are now so many signs of extreme conditions in financial markets that investors now need a careful review. Unfortunately, as this article points outs:
“Economists and investors have spilled a lot of ink describing bubbles, yet central bankers

and investors never seem to learn and people get caught up in them.”

In general investors get caught up in what appear to be relentless trends that have so many short term benefits. It is so much easier to decide to become reactive and just enjoy the current trend, rather than proactive, which right now may seem like an uncertain and even irrational decision.

“Are we smart enough to ride and then step aside before it bursts?

Research says we all think that we are, yet we rarely demonstrate the actual ability.”

At some point in every bubble the signals of a bubble start to proliferate. At the same time the number of people who are nevertheless participating also increases. Leverage and belief in the trend rises relentlessly and the markets become over crowded and one-sided. Participants somehow come to implicitly express remarkable faith in the benefits of record production of money created out of nothing.

However, during this process, how many will stop and think clearly about when this cycle may have gone too far? There is a point when it becomes vitally important to realize that long term risks have become excessive relative to expected long term gains.

You be the judge of whether we are there right now. I have listed 7 significant red flags, that should not be ignored.

‘When these bubbles finally burst, let no one exclaim that they were black swans,

1. In his latest weekly article Dr John Hussman exposes the very weak case behind the dogmatic theories underlying the Federal Reserve’s Policies ( http://www.hussmanfunds.com/wmc/wmc131104.htm).  It also has this remarkable chart shown below. The last 3 times we had this set of equity markets metrics was near the exact peaks of the S&P 500 in 1972, 1987, and 2007. In November 2013 we have just had the exact same signal trigger, for the third time in just this year. 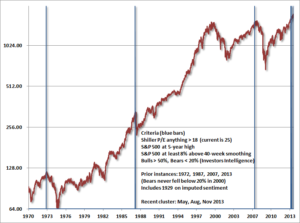 2. At this stage it is clear that the most aggressive Fed QE program ever, that was initiated in December 2012, has failed. The Federal Reserve’s own forecasts for 2013 GDP growth have consistently fallen throughout the year. In Q4 2013 growth is unlikely to exceed 1%—that is even less than the already anemic 1.6% rate of growth in the past four quarters. Dr Lacy Hunt explains why Fed’s QE program is failing and very unlikely to produce the advertised results (http://www.caseyresearch.com/articles/federal-reserve-policy-failures-are-mounting).

3. The sentiment back drop has reached a key bearish signal. Investment Advisors have now reached a 3 to 1 ratio of bullish to bearish opinion. The last 3 times this happened it was a bad time to buy equities, including the 2007 peak.

5. The market is now totally absorbed by the current conviction that QE automatically means higher stock prices. End of story. However, what if this central thesis, that currently dominates current market behavior, is nothing more than a “Grand Superstition”. Dr John Hussman explains why this thinking is deeply flawed, as can be verified by observable data.
http://www.hussmanfunds.com/wmc/wmc131028.htm

6. Banks are by far the main beneficiaries of QE policy. However, banks stocks are now breaking down relative to the S&P 500. It may be that the correlation between QE and the US stock market is also beginning to fail.

7. Non-financial global corporate cash flow and capex as a percentage of G4 (US, UK, Europe and Japan) remains weak. In particular, cash flow is now in steep decline and has fallen back to 2009 levels.
http://www.zerohedge.com/news/2013-11-03/show-me-lack-money-global-corporate-cash-flow-slides-2009-levels

If these red flags do concern you there are solutions which are discussed in great detail in this link https://chrisbelchamber.com/cb1/mn/mn85.asp.