All Currencies Have Been Devalued or Died

“All Currencies Have Been Devalued or Died” 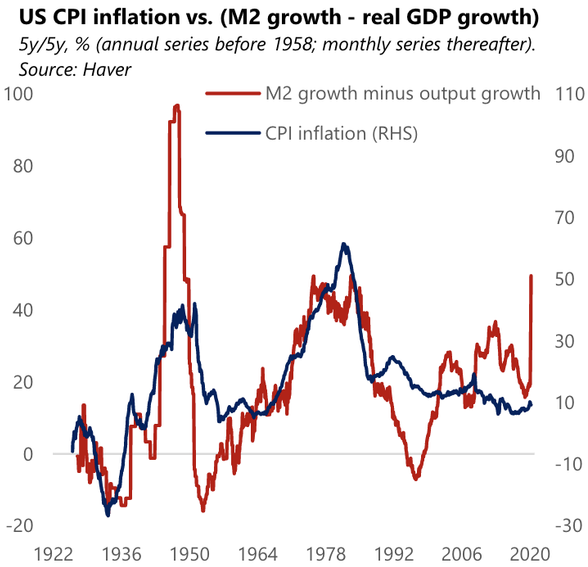 “There are only a few times in history when M2 growth exceeded real output growth over a 5-year span by the same or a faster pace than is currently the case: the inflationary periods of the 1970s–80s and the late 1940s.”

The chart above shows the two previous cases of substantial inflation in the US in the last century. In both cases they coincided with an extended period where M2 outgrew real GDP growth.

The last 2 occurrences also coincided with significant devaluations of the US dollar relative to gold. This is typically the case for reserve currencies and was also the case for Great Britain and the Netherlands.

Investors needed to appreciate that currencies have often become casualties and inflation is an important outcome when they do. Also that currencies, in general have a fragile record and sooner or later underperform relative to gold. Their record is unblemished with success!

“Of the roughly 750 currencies that have existed since 1700, only about 20% remain, and of those that remain all have been devalued.”

“history has shown that there are very large risks in holding interest-earning cash currency as a storehold of wealth, especially late in debt cycles.”

So far the US dollar has held up well relative to other fiat currencies. However, bond investors now need to watch both the US dollar and M2 carefully, at a time when the upside to bonds has become very limited.