Is Japan reaching the limits of QE?

Is devaluing the Euro the only option left for the ECB?

Does the US now have the potato?

If you can’t pass the potato, is that checkmate?

From central banks to cycles 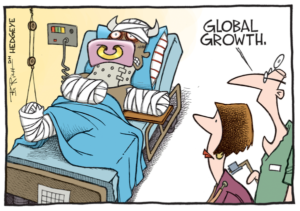 is still not producing the growth and inflation that the central banks have been projecting since the 2008 collapse. After 7 years of poor performance, shouldn’t something have been learnt by now?

As the same methodology is still being applied, one can only assume that the answer is a resounding “NO”. The only other explanation is that policy makers do not know what else to do, but fear the consequences of stopping even more than continuing and hoping for the “best”.

However, now they are running into even greater new difficulties.

Is Japan reaching the limits of QE?

In Japan, “not only is Japan’s economy not improving, but it just posted a negative GDP print for the second quarter, suggesting unless there is a remarkable comeback, Japan may suffer its fifth recession since 2007. ”

Even with Japan’s enormous debt issuance, the Bank of Japan has been so aggressive with its QE program that … “by monetizing more than the entire Japanese budget deficit, the BOJ is running of out willing sellers. Without those, Japan’s QE, just like that of the ECB, where gross supply is also a key issue for a continent with a trade surplus, will grind to a halt.”

Is devaluing the Euro the only option left for the ECB?

Yesterday in Eurpoe, the ECB had to downgrade 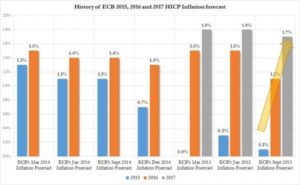 all its inflation and growth forecasts. Apparently, the misses are “transitory”,  claims ECB President Draghi, but for how long can they say that? More than 18 months apparently looking at the chart of the decline in inflation. The foreign exchange markets took this to mean that the only solution left is devaluation, so the Euro sank on the news.

However, the Yen and the Euro have already fallen dramatically over the last year or so. If devaluation is a solution then where is the economic recovery?

“In the bigger picture, it is clear that Europe’s central bankers are finding out what America’s have already feared, that QE itself just doesn’t work. It was instituted this year in Europe because the ECB had already, contrary to media narratives, tried everything else that it could possibly dream up – to no avail. The world is overflowing with “demand” stimulus but almost no marginal demand at all, which is what the confluence of the “dollar” and oil prices project and confirm. The reasons for that are startlingly simple, as instability is a terrible foundation for honest trade.”

Investors are trying to figure out the end game 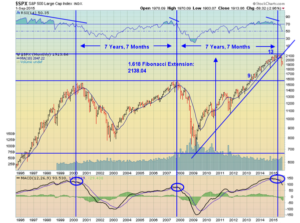 to what appears to be consistently failing policies as long term trends have broken in key equity markets. Two Morgan Stanley fund managers have come up with a new theory, which makes some sense, at least in part.

“In this game, central banks compete against each other by easing monetary policies in an attempt to meet their domestic, inflation-targeting mandates. Lack of coordination among central banks may mean that monetary policy remains lower for longer, leading to a semi-permanent low-yielding environment. At the end of the Global Chess Game, we are likely left with more central bank money, higher asset prices, low inflation and low yields.

While the portfolio managers make a comparison to chess, the scenario they depict also bears an even more striking resemblance to a game of hot potato, in which central bankers pass each other an unenviable deflationary parcel through their relative exchange rates.

The punishment for trying to leave the game or refusing to play, according to the portfolio managers, is deflation.”

Does the US now have the potato? 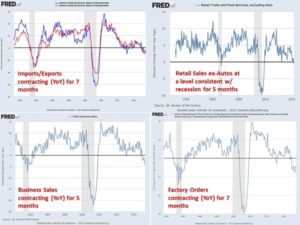 nearly a year, and so the dollar has rallied significantly. Some claim this shows the “strength” of the US economy, but underneath this thin rationale lies an alternative and inconvenient reality within US data. The charts here show a growing list of key indicators that have only ever happened when the US has been in a recession. This leaves aside much other data which confirms economic weakness. GDP growth is tracking around 1.5% for 2015, which is below target and a significant decline from last year.

In addition there is a persistent decline in US PCE inflation, the Federal Reserve’s favored measure, and it is already well below their stated target.

As growth and inflation are their main mandates and the Federal Reserve is missing badly on both these measures, this is a strange time for this institution to be persistently talking about raising rates.

If you can’t pass the potato, is that checkmate?

Using the mixed analogies above, doesn’t this look like check mate for central bank policy, as described in the BIS Annual Review?

Could it possibly be that after 7 years of central bank experiments which disproportionately subsidized the banking system, that all that has been learnt is what we should have already known?

Investors need to understand how far off the map the central banks have taken policy and the markets. There are many layers of unintended consequences and complexity that result from multiple years of central bank intervention. This creates new dynamics and risks that have been suppressed.

From central banks to cycles

Once this appreciated, it is clear that the investment challenge is considerable at the present time, as there are many unintended consequences from years of central bank intervention and suppression of natural cycles.

For all these reasons, it is crucial for investors to have an investment process that has a good chance of handling these highly unusual circumstances. As last week’s note suggested a non-linear investment process that recognizes the importance of cycles may provide a more effective long term solution to following the latest guidance from central banks.