Depression They Call A “Recovery”

Social Fragmentation Suits The Powers That Be

“The central bank is an institution of the most deadly hostility existing against the Principles and form of our Constitution.” – Thomas Jefferson

The header chart shows the accelerating gap between current global trade and the previous exponential path of bank credit driven global trade growth. The machine broke in 2008 and no matter what they do, or how much they pretend, they can’t put Humpty Dumpty back together again.

The central banks are all out of solutions, but their last hope is that they still have a con game, and want to keep it going for as long as possible. While global trade, economic growth and corporate earnings continue to sink relentlessly, central banks still have the ability to print excessively, buy assets to make things look good, and pretend everything is fine.

This is precisely what the chart below shows. 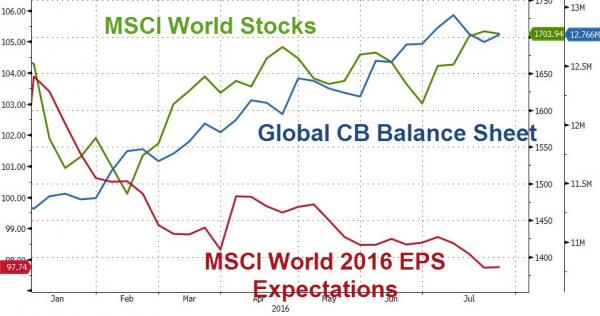 The central banks are in effect saying “lets pretend its all good”, or “Keep Calm And Carry On”.

Social Fragmentation Suits The Powers That Be

“The real danger in terms of money and economy might be when the world wakes up to what I wrote above; policymakers have been calling a depression a recovery for nearly a decade. The implications of that might be where this possible event horizon sits; that central banks have exhausted themselves and we still got depression anyway.

I’d like to think that logic and reality will prevail; that distaste for being told how great the world is has become sufficiently revolting and obviously false to stir the world’s populace to end the imbalances. But that, again, will take time, perhaps a good deal of time; until then, whenever it hopefully is, central banks continue to operate with impunity even though the risks of their intemperance rise exponentially as time further accumulates and their claims fall further from reality. It’s not a good set of circumstances, especially since all QE did everywhere it was tried was show that confidence in it was sorely, disastrously misplaced.” As GDP hasn’t grown for 25 years …… maybe time for a review! Ya think? 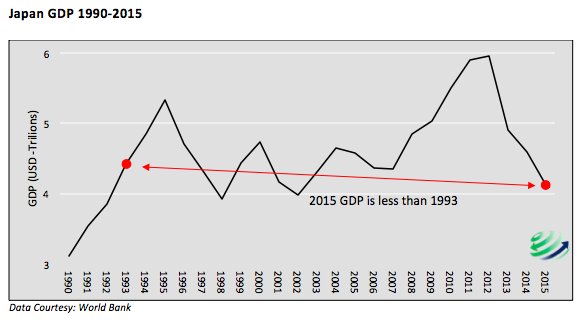 Away from central bank smoke screens and machinations, economic problems continue to mount.

“For those who still assume that US high-paying jobs are doing just fine, the following disclosure from EQR will be disturbing: San Francisco and New York, which account for half of Equity Residential’s projected revenue growth, are seeing a slowdown in hiring for jobs that pay enough to enable renters to afford the new luxury-apartment supply coming in those cities, Chief Operating Officer David Santee said on the call.”

“the biggest problem for DB remains its massive balance sheet. Morgan Stanley analysts calculated that Deutsche Bank has a €9 billion capital hole to fill by 2018, and that’s not including damage caused by future litigation costs, which considering DB’s record of pervasive capital rigging, are sure to rise.”

Eventually, something has to be done about the debt which is just too high. Inflation is a popular remedy. Here are some early signs that stagflation has already begun.