All economies are becoming “ZIRP Zombies” as currency wars continue.

The “Bank Alchemy” monetary system, started in 1968, is rapidly unravelling.

“ZIRP Zombies” may be forced to choose again between “Bank Alchemy” and gold.

Gold should be a minimum allocation of 5%. More in an uptrend.

Starting August 11, they also changed the rules. From now on, if the yuan traded at the bottom of the band, the next day’s trading would start at that level (instead of the middle of the old band), and could trade down to the bottom of this new band. This allows for much more volatility, so expect more devaluation.

China’s economy is imploding. In July, exports and imports both collapsed. In June, their shadow banking system (a big part of China’s credit market) completely dried up. There was zero net new lending. This kind of slowdown is not just an economic problem in China, it’s a political one. If the Communist Party cannot create jobs, civil unrest and riots are sure to follow. The Communist Party has put survival ahead of good relations with the U.S.

China has been laboring under a strong currency all year, and their growth has slowed perceptibly. But China has another goal, which is to have the yuan included in the IMF’s world money called the Special Drawing Right (SDR). The decision on the SDR was expected in November 2015. However, the U.S. expected China to maintain the yuan peg to the dollar as part of the price of admission into the SDR “club.”

China was playing along. But last week, the IMF extended the deadline for a decision on the SDR components to September 30, 2016.

China knew that if they kept the peg until then, their economy would be even more underwater. The Chinese stock market was already crashing and the cost of a strong currency was too much to bear. So, China took advantage of the breathing room they got from the IMF and devalued just one week after the IMF announcement. China can go back to good behavior next year. For now, they’re going for bad behavior in the currency wars.

The IMF is OK with what China did. They don’t care about the cross rate as much as they care about open capital accounts and market mechanisms. Technically what China did is a step in the direction of letting markets determine the exchange rate rather than the PBOC.

The fact that the market took the yuan down is highly convenient for China, but both China and the IMF are acting under cover of “market forces” instead of manipulation.

This takes currency wars to a new level 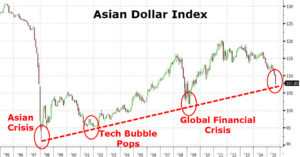 and it reinforces the pressure on emerging markets, which have continued to make new lows in both currency (CEW) and stock market (EEM) terms.

It also transfers deflationary pressure to 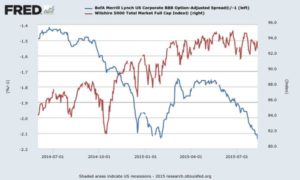 the US, with a new low in junk bonds (HYG) despite a rally in Treasuries (IEF). Credit spreads have also widened to new extremes. This is usually highly correlated with US equities, but as is typical with US equities in the current cycle, this normal economic relationship is entirely broken.

One less obvious price development was that gold managed to rally even in dollar terms, significantly outperforming commodity indexes. Clearly, gold had reached some extremely oversold conditions last week so a rally should have been expected, but the timing may seem counterintuive with the dollar being revalued higher against the Chinese Yuan. It is worth seperating out the technical position in gold from the timing as there could be 2 seperate messages from the price action.

First of all the technical situation in the 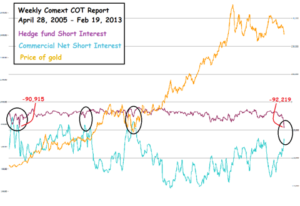 gold market was exceptional even for the gold market.  The chart here shows the last three times the trader/commercial imbalance was this extreme it led to a gold rally each time. Hedge funds were recently net short of gold for the first time ever!

The second message is that the timing may signal a less obvious interpretation of the Chinese devaluation. The global monetary system is unravelling.

In 2008, the global economic bubble came very close to collapsing into a new great depression. That didn’t happen because global policymakers responded to the crisis by injecting trillions of dollars of monetary and fiscal stimulus. That stimulus succeeded in keeping the global bubble inflated for seven years. Now, however, stimulus has given way to austerity; and the global economy has begun to rapidly slide back into recession as a result.

In the latest Macro Watch video, Richard Duncan took stock of “The State Of Stimulus”.  The Index of Global Liquidity measures global liquidity by adding together the balance sheets of the world’s four largest central banks (the PBOC, the Fed, the ECB and the BOJ) along with the foreign exchange reserves of the rest of the world.

What we find is that, after many years of rapid growth, the increase in global liquidity has come to a near standstill. This sharp monetary tightening is the main reason our global economic bubble is now deflating so rapidly.

Next looking at fiscal policy in the budgets of a dozen or so of the world’s largest governments. Again, the general pattern we find is one of rapid fiscal tightening that is also acting as a heavy drag on global economic growth.

Like it or not, our global credit bubble cannot remain inflated without ongoing, large-scale government stimulus. Instead, we now have both monetary and fiscal austerity. That means the chances of a new worldwide economic breakdown are once again on the rise.

This deepening concern raises the pressure on the central banks to find some solution. All they know is that past reflation measures have not worked, as has been admitted by their own forum, the Bank For International Settlements. So the pressure is beginning to rise to find a much more aggressive or maybe more effective form of stimulus. However, even better would be an entire rethink of the monetary policy system.

Central Banks are beginning to recognize that all they have achieved is to turn economies into a trap where they all become “ZIRP Zombies”. It is time to go back to the drawing board of basic monetary policy.

It is key to understand that before 1968 the financial system was on at least a partial gold system. Thereafter the monetary system effectively ended capitalism and switched to “creditism”. This set off an entirely new set of incentives and consequences as Richard Duncan explains in great detail.

As the video shows the whole basis of the monetary system changed. Rather than physical gold being the benchmark for money, bank credit became the benchmark. Bank credit has no physical limitation and it is created at least partially out of thin air. Some would consider creating base money out of thin air as an astonishing privilege at best or counterfeiting at worst. It could also be regarded as the most successful period of alchemy of all time!

The incentives to over produce this form of money are enormous, both in wealth terms as well as power and influence. It is no surprise therefore that growth in credit/debt exploded exponentially until 2008. Since then credit growth has weakened significantly despite enormous intervention to encourage it.

These attempts now seem to be failing 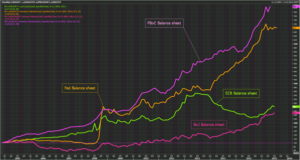 despite their vast scale. Indeed China’s attempts have made new records for stimulus in recent years. The chart here shows that the PBOC has expanded its balance sheet by more than any other central bank.

So China’s acute economic problems suggest scale is not the issue. The central banks must know by now that a new formula will be needed. So there is now great uncertainty surrounding the failure of the current system, the greater that uncertainty the more attractive gold should become as the gold sytem has been far more stable and successful throughout history.

Anyone who doubts the place of gold in this debate should consider why central banks themselves own so much gold, and why have they have become net buyers in recent years. If countries and central banks own it as imperative insurance against the current scheme for money that they themselves are currently managing! Shouldn’t you also?

Investors may need to review their gold allocation given the newly developing situation. This is where Ray Dalio’s comment should come in to play. Gold’s importance to the system is just as important as it ever was but its relevance may be about rise once again.

I recommend a minimum 5% allocation to gold at all times, and higher levels in an uptrend. This should be regarded as minimum insurance. Do you ever think that it would be wise to lapse your home, car or health insurance? If not then it is appropriate to consider a minimum gold allocation for wealth insurance.