Look under the hood. No real equity bull market.

Unavoidable Conversation Now. Even on Bloomberg.

8 reasons why the Fed is wrong.

The header chart shows that performance of the S&P 500 has now become completely disassociated from both the direction of economic growth and forward earnings expectations.

This price action would normally be 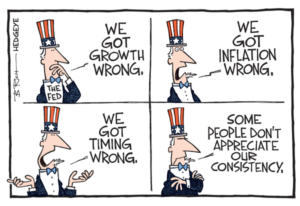 considered incomprehensible market behavior. However, now, the Federal Reserve seems to have become heavily invested in fixing  markets to fit their narrative, almost regardless of fundamentals.  Even as growth and earnings expectations continue to decline, with no improvement in sight, out of the blue, the S&P 500 has had a record rally. The central banks have decided that “saving” stock markets is a primary function of policy.

As discussed in last weeks note, even though all their policy measures add up to a net negative for the economy, what the policy measures have done is create enormous excess liquidity.

The Fed’s market influence in tandem with the bailed-out banks, who in addition have leverage on their excess capital, can easily overpower any other market participant, and adjust the “market” until it looks “appropriate” to them, if only for a time.

Look under the hood. No real equity bull market.

The largest US equity index is the NYSE 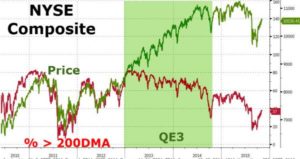 Composite and this chart shows how many stocks are participating in the equity “bull” market. What you will see is that as much as 63% of US stocks are below the 200 day moving average. Also that number is in a 3 year uptrend! In other words almost two out of three stocks is actually in a bear market! And its been getting worse for 3 years!

The chart also shows that since early 2013 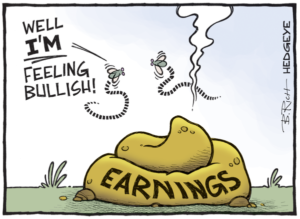 the massive uptrend has been heavily focused on just the big caps in the S&P 500, but as we have discussed before this has been mainly driven by liquidity from QE and buybacks. GAAP earnings and revenue growth has been absent. How can it be a genuinely healthy equity market if 63% of stocks are in a bear market and there is no earnings or revenue growth?

However, by introducing these distortion 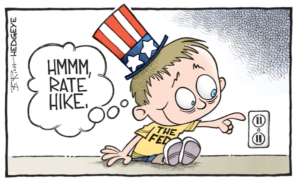 they have also managed to create yet another problem. Even though they can keep up appearances for a while, they are also injecting further tightening of policy which will compound current economic problems.  By putting a December rate rise back on the table they have caused a dollar rally and higher bond yields across the curve. That is a tightening of policy even as the downturn becomes ever more established and severe.

So this price fixing strategy is only going to reinforce and compound further economic decline. In other words they have added a negative feedback loop on top of failed policies, just to fix prices.

This has become a decaying control system.

Unavoidable Conversation Now. Even on Bloomberg

This viewpoint is becoming less and less of a minority view. So obvious is the current global economic degradation and wholesale failure of policy that it has now become openly discussed on Bloomberg Business News. Here are two separate clips from two different programs.

Astonishingly, as discussed in the first video

above, institutional rigidity being what it is the Federal Reserve will never accept the reality of the situation, much less question and address the problem.

8 reasons why the Fed is wrong

It is worth understanding how critical this situation has become and also how fragile the world economy already is. These points below show how economically out of touch the Fed has become, and how damaging any further policy tightening could be.

Here are several points that should make this clear:

1. Year-on year nominal GDP growth has now fallen below 3%. This has not happened since the 1930s depression! 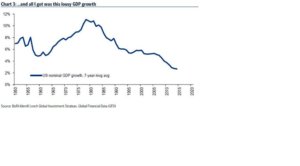 3.  2015 real growth on track to be the third consecutive decline in calendar year real GDP growth. 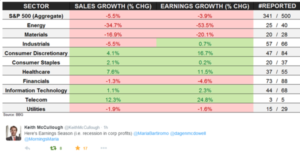 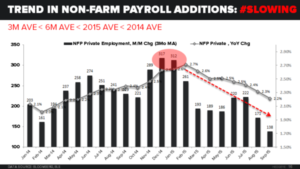 How much difference will one 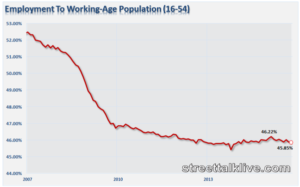 7. Both Income and consumption have also peaked for this cycle. 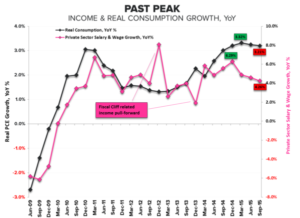 8. World growth backdrop is very weak and getting weaker.

Just take the International Monetary Fund for starters. Whatever you may think of this organisation, it does have a pretty good handle on the global Big Picture. Last month it produced yet another review of global growth expectations – in which it cut its 2015 forecast once again. This is the fourth reduction in growth forecasts by the IMF in 12 months. It now expects global growth to come in at 3.1% for 2015. It also cut its forecast for 2016, to 3.6%. I would be very surprised if this isn’t cut again when the IMF performs its next review. This is also the fifth straight year in which growth in the emerging world is expected to slow from the previous year. The IMF’s forecasts made three years ago for growth up to 2020 have been cut dramatically – by 6 percentage points for the United States, by 14 percentage points for China, by 10 points for emerging markets and 3 points for Europe. The IMF also states that global risks to financial stability remain “heightened.” It identifies market and liquidity risks as increasing, with declining risk appetite in financial markets.

Who knows what game the Federal Reserve is playing at this point? However, investors need to be very clear that the central banks have gone off the map. Even the central banks own BIS has said so, as described months ago. However, this problem is now escalating, with very significant consequences.

This has become one of the most challenging investment periods ever. Not only are US stocks and bonds at record high valuations, but also interest rates are zero. Credit risk is in an established bear market, and now, in addition, it is no longer reasonable to expect normal relationships between economic data and security prices.

Clearly risk needs to be very limited and with an inappropriate tightening of policy into already severe economic weakness the risks are only rising. Short maturity government bands clearly should be a very high allocation. It is time to hold fast and even buy more Treasuries.

Also, most likely the US Dollar may have another leg higher.

Some diversification makes sense but outside of government bonds allocation needs to stay very low.