“Hayden agreed with me that financial war will be a primary means of warfare in the twenty-first century”  Jim Rickards.

Only one person has ever been Director of both the National Security Agency and the Central Intelligence Agency. That person is retired Four-Star General Michael Hayden. His conversation with Jim Rickards in June this year was naturally very interesting, not least from a financial perspective.

The search continues for reasons for the Federal Reserve’s continued tightening bias despite no clear economic justifications from its own forecasts. A new approach is enlightening. Certainly the Fed’s bias, which was reinforced again this week, has had significant consequences that are easy to understand.

The chart above shows that for the last year the dollar has been the strongest currency in the world. As a direct result, commodities, which have a negative correlation with the dollar, have been collapsing, and July 2015 will be one of the worst ever months for commodities.

It will also be one of the worst months 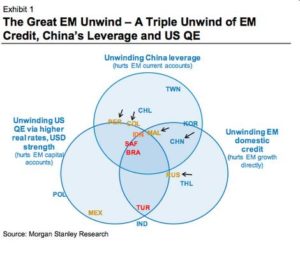 for emerging markets. Emerging markets, in many cases, are commodity exporters, so this decline hits their current accounts as their export values decline, but it goes much further than that as Morgan Stanley’s diagram shows. The weakening currency pressure also puts upward pressure on domestic interest rates and so domestic credit. Then finally the withdrawal of QE and higher global real rates from US policy adds additional pressure on their capital account.

Whatever the rationale for Fed policy guidance, the consequences are clear for the world economy and the feedback to the US itself should not be underestimated.

This week’s GDP data shows the US growing by only 1.5% in the first half of 2015, with very high levels of inventory. Hardly a promising backdrop for 2015 as a whole. Furthermore, the punch line of the report is that it revealed “The worst “economic expansion”  in history was even worse than previously expected.”

Also one of the main stated concerns of the Fed has been the “tightening” labor market in the US. This notion received a body blow today with the quarterly Employment Cost Index.

“The quarterly increase in US wages was just 0.2% – a third of the 0.6% rise expected – dashes the “wage growth is looming” meme and crushed the 0.7% rise in Q1 that had so many hopeful of escape velocity any day now. Because the ECI tracks the same job over time, it removes shifts in the mix of workers across industries, which is a shortcoming of the hourly earnings figures, which makes this number even more of a diaster. This is the weakest US wage growth since records begain in 1982… and half as slow as the weakest of 57 economist estimates.”

Declining inflation and growth is what this adds up to and the Fed’s continued guidance in the face of the latest data may only serve to intensify a Quad 4 investment backdrop. This has already been our own thesis for some time.

The market internals are now also suggesting this is increasingly being factored in. As usual, John Hussman provides some outstanding wisdom on this issue and demonstrates the almost unique conditions reflected in markets today.

“If I were to choose anything that investors should memorize – that will serve them well over a lifetime of investing – it would be the following two principles:

1) Valuations control long-term returns. The higher the price you pay today for each dollar you expect to receive in the future, the lower the long-term return you should expect from your investment. Don’t take current earnings at face value, because profit margins are not permanent. Historically, the most reliable indicators of market valuation are driven by revenues, not earnings.

2) Risk-seeking and risk-aversion control returns over shorter portions of the market cycle. The difference between an overvalued market that becomes more overvalued, and an overvalued market that crashes, has little to do with the level of valuation and everything to do with the attitude of investors toward risk. When investors are risk-seeking, they are rarely selective about it. Historically, the most reliable way to measure risk attitudes is by the uniformity or divergence of price movements across a wide range of securities.”

Finally, and perhaps even more importantly the annual Social Security report came out recently and it is important to understand how distorted the official report may be. Social security is clearly an important issue for all of us, but its durability and reliability must now be seriously questioned. This is a complicated issue as it involves a range of assumptions, but I believe David Stockman, who was once OMB director, has done us all a great service by providing an alternative viewpoint. It may well change the appropriate assumptions people are making as regards their social security financial plan.

“Except that is not what the report really says. On a cash basis, the OASDI (retirement and disability) funds spent $859 billion during 2014 but took in only $786 billion in taxes, thereby generating $73 billion in red ink.  And by the trustees’ own reckoning, the OASDI funds will spew a cumulative cash deficit of $1.6 trillion during the 12-years covering 2015-2026.

So measured by the only thing that matters—-hard cash income and outgo—-the social security system has already gone bust. What’s more, even under the White House’s rosy scenario budget forecasts, general fund outlays will exceed general revenues ex-payroll taxes by $8 trillion over the next twelve years.”