The Federal Reserve’s continuing preoccupation with raising rates makes the dollar look very attractive worldwide and has created a strong tailwind that started in the second half of 2014. However, it has created two very important feedback consequences. 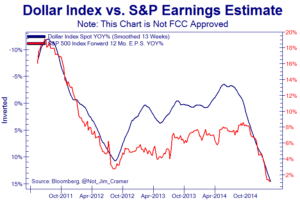 The chart above shows how closely correlated earnings expectations are with the dollar. The sharp correction in expectations has been sufficiently large to suggest that this alone could push the US close to a recession, as is shown in the leading chart.

Another consequence is that there is significant downside pressure on prices. This week also showed that CPI has now fallen below zero on a 12 month basis. 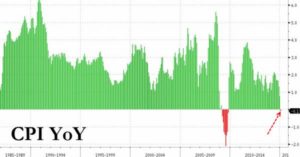 Ordinarily, this set of conditions would favor bonds over equities. Real interest rates are rising on bonds, while the earnings outlook is deteriorating for equities. However, we now live in the upside down “simon says” world of central banks who prefer security prices to conform to their narrative.

In February the central banks managed to reverse the bond outperformance of January but for how long? CAPE earnings multiples are now rising at an even more rapid rate as earnings growth weakens and revenues are already expected to fall this year. It is overwhelmingly clear that while security prices can be influenced, central banks have become increasingly impotent in actually boosting the real economy.

The most aggressive and advanced case of central bank intervention is Japan. Even here the evidence of real improvement is weak at best on the latest data this week.

Whether investors realize it or not they are now investing in an asset class which depends increasingly on the whims of central bank statements. No longer can it really be said that the policies themselves have much if any prospect of success. At record valuation levels this should be a matter of concern and attention, as return expectations over long term time horizons are now very poor as previously shown.

If the investment case is weak then your short term returns have become increasingly dependent on trading central bank interventions.

In this case, Kevin McCullough explains how this works.

If this is not how you believe your wealth should be managed, it is vital to have a strategy that can navigate this extraordinary set of circumstances.