“In a time of universal deceit – telling the truth is a revolutionary act.” – George Orwell

For the last 18 months world GDP has been falling like a stone. 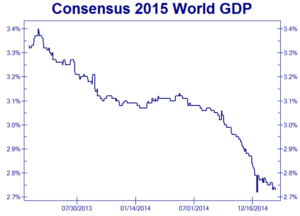 However, massive central bank buying has inflated stock prices around the world. The duration and scale of the resulting equity market rally has materially altered the outlook of investment advisors, particularly in the US. Sentiment is now sustaining unprecedented levels of bullishness. 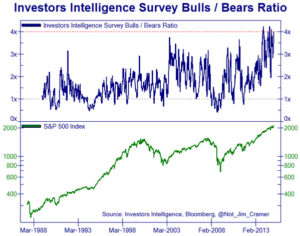 Despite this very one-sided sentiment profile rational expectations for investment returns have rarely, if ever, been worse. The best estimate for nominal returns in the US stock market over the next ten years is less than 1.5% annually. Real returns should be negative.

These extremes in terms of economic weakness combined with record low rational expectations seem very much at odds with the exceptionally high bullish sentiment. On their own these are remarkable and extreme measures. However, in combination the incredible divergence between sentiment on the one hand and rational expectations with steeply declining world growth on the other hand is historically unprecedented.

This means that investment risk is also now exceptionally high.

Cognitive Dissonance arises as the conflict between two coexisting contradictory ideas. This is now especially acute in the financial markets. Rather than diminishing it has continued to grow in line with the growing interventions of the central banks that have now reached epic proportions.

The key questions in how this will be resolved is what are the central banks really doing, why, and how long can they keep doing it. A good starting point is to recognize that central banks have been providing their “medicine” to the world economy for over six years on a massive scale. If it was going to work there should by now be at least be some signs of moving in the right direction.

Growth was supposed to accelerate, instead it is collapsing on a worldwide basis. This is not a near miss or a minor miscalculation. The “medicine” has simply turned out to be poison.

When any thesis fails this drastically it is time to reexamine the premise. Start again from the beginning and discover the flaw in the argumentation.

Banks make leveraged returns from debt. Put this incentive together with the privilege of printing money, which provides safety against bankruptcy, and banks will very soon have enormous and almost guaranteed profits over time. With these rewards comes influence and increasing power to determine intellectual fashion. If debt is good for banks then it would help them if academic theories promoted debt, or, at least, diminished the problems of too much debt. With their accumulated wealth it is a very cheap investment to provide significant rewards for economic theories that support this agenda. Their influence can also help silence the critics.

In this world where debt is a wonderful thing, “extend and pretend” is also always a good idea. No need to worry about exponentially rising debt. If it can’t be covered with printed money it can always be rescheduled. The burden can also be diminished by ever lower interest rates.

Once these solutions have become the norm real debt resolution can theoretically be suspended for ever and new debt can be built on top of the old debt. Then all that remains for the debt owners is ever increasing control and asymmetric rewards. The only incentive in this loop is to just keep doing it!

However, over time the damage becomes unbearable for the rest of humanity. Eventually enough people will understand that the system is based on deception and they are the victims. The deception and damage also grow exponentially. As Charles Hugh Smith explains very well:

“The costs of ill-conceived policies are always paid by someone–usually those with the least political power …Thanks to extend-and-pretend bailouts, the pain of adjusting to reality is now being dumped not just on the people of Greece but on the people of every nation in the EU.”

Investors need to understand that QE, ZIRP, and now NIRP, are just “extend and pretend” in another costume. By now it should be obvious that these policies are obviously failing in their stated purpose. There should be little doubt about this to anyone who is prepared to examine the evidence.

This process continues even as economic indicators are now ringing bells both in terms of the near term as well as longer term data. 88% of data in February has missed:

And here are 7 charts that suggest there is a longer term problem brewing:

How can markets and fundamentals possibly be so disconnected?

Central Banks “investment” portfolios have never been bigger and they continue to grow. This year just QE will overwhelm all global sovereign bond issuance. For the first time in history all government bond issuance has already been taken care of by QE with billions left over.

This creates an asset shortage which elevates all markets and enables governments to have no concerns or restraints on the amount of debt they create.

More debt. More QE, ZIRP, and NIRP. More profits and control for the banking system. Extend and pretend for ever! Real economic destruction? So be it!

Investors who have become committed to a long term bullish perspective may not fully understand the real nature of the financial system, the banking system’s imperatives and increasing strength, but also its increasing fragility. This is not an easy problem for investors, however the first stage is understanding the problem and this is hard enough when there is so much purposeful misinformation and deception.

No one can forecast the future but understanding the nature of the problem is a necessary condition for the possibility of success.

Investors need a strategy that can adapt to multiple outcomes. This is why I developed the Cycle Dynamics Portfolio.