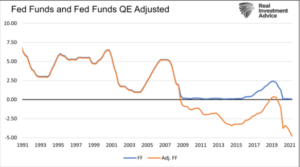 1. “The most inappropriate monetary policy that I’ve seen maybe in my lifetime.”- Paul Tudor Jones on the Federal Reserve via CNBC.

Last week’s chart showed the all time record low in the Real Fed Funds rate. However this takes no account of the extraordinary level of QE in the US and all around the world. So in practice the stimulus is even greater than is reflected by the real fed funds rate. The chart above factors in Ben Bernanke’s estimated effect of QE in interest rate terms.

“Since the birth of QE, the graphs above do not paint a complete picture of monetary policy. To do that, we must factor in QE and the effect it has on interest rates. Ex Fed Chairman, Ben Bernanke, estimates every additional $6-10bn of excess reserves held by banks (a byproduct of QE) is roughly equivalent to lowering interest rates one basis point.”

As Paul Tudor Jones says, these are simply extraordinary conditions. Why is that? And how will we ever “normalize” if that is even possible anymore?

2. Extreme policy actions are a function of an increasingly dysfunctional financial system. This is why inflation has broken out and also why it may not  be easily reversable. Understand how the system really works and what could come next.

3. Don’t ignore the long term fundamentals of precious metals. However, pay attention to timing as Gold doesn’t like Quad 2 reflation, a likely outcome in Q4 2021.

4. Major central banks continue to resist any tightening. The European Central Bank is in a similar position to the Fed, but it passed on taking any measures on Thursday 10/28.

The ECB and the Fed are in constant communication. So along with everything else we have seen, expect the Fed the tread light6ly at it’s meeting next week. Current central bank policy is simply extraordinary and may well be viewed historically as the most irresponsible in history. While it rests on their “forecasts”, they have a consistently poor record in forecasting and are already admitting that their own “forecasts” they made just a few months ago are adrift.

5. My Money Show presentation video covers the Inflation Predicament, Quad 2 in Q4 2021, and risk management examples. The latest weak data is really about Q3 2021. Markets are forward looking and the case for Quad 2 allocation for Q4 2021 has continued to strengthen.