Fed Up With The Fed.

Fed Up With The Fed

Central Banking has been contentious for centuries

“The Bank is trying to kill me, but I will kill it.”
— President Andrew Jackson

The most expensive asset prices in history.

The weakest growth since the 1930’s depression

How is an improvement possible if real wages continue to fall?

And productivity is falling too.

The market is essentially saying that raising interest rates is the wrong policy action.

Fed Up With The Fed

“Destroying our ability to discover the real cost of assets, credit and risk has not just crippled the markets–it’s crippled the entire economy. Wake up, America, and stop worshiping the false gods of the Fed. The sooner we smash the Fed’s idols and strip away their power to enrich the few at the expense of the many, the better off we’ll be.”

Central Banking has been contentious for centuries

Central banking has been a hotly debated issue for centuries. Most famously it was the issue on which Andrew Jackson was elected in 1832.

“The Bank is trying to kill me, but I will kill it.”
— President Andrew Jackson

The Second Bank of the United States was authorized for a twenty year period during James Madison’s tenure in 1816. As President, Jackson worked to rescind the bank’s federal charter. In Jackson’s veto message the bank needed to be abolished because:

Following Jefferson, Jackson supported an “agricultural republic” and felt the Bank improved the fortunes of an “elite circle” of commercial and industrial entrepreneurs at the expense of farmers and laborers. After a titanic struggle, Jackson succeeded in destroying the Bank by vetoing its 1832 re-charter by Congress and by withdrawing U.S. funds in 1833.

The situation has become so absurd and dysfunctional that more than $11 Trillion dollars of “QE” money printing has been introduced to “stimulate” the economy through asset purchases. What has it achieved?

The most expensive asset prices in history. 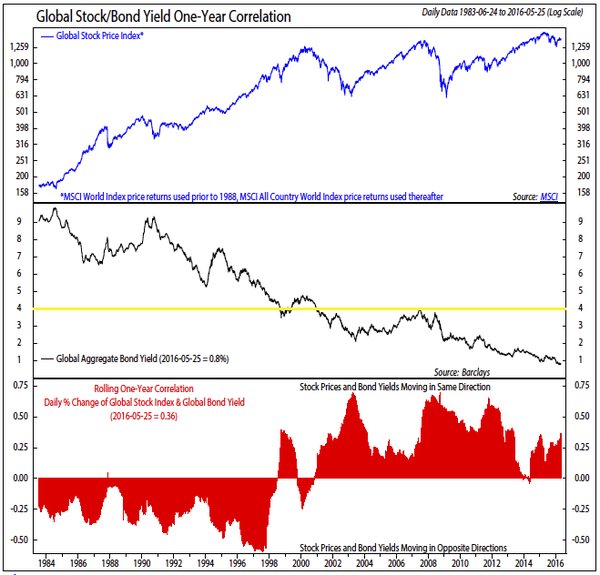 Bonds have never been more expensive with a record number even at negative yields! Then here is what Goldman thinks about US stocks.

The weakest growth since the 1930’s depression

The weakest 7 year period of growth in the US since the 1930’s depression, and the US is regarded as amongst the strongest economies in the world.

In the US we can see how growth has not only been weak but has now stalled.

How is an improvement possible if real wages continue to fall?

And productivity is falling too. 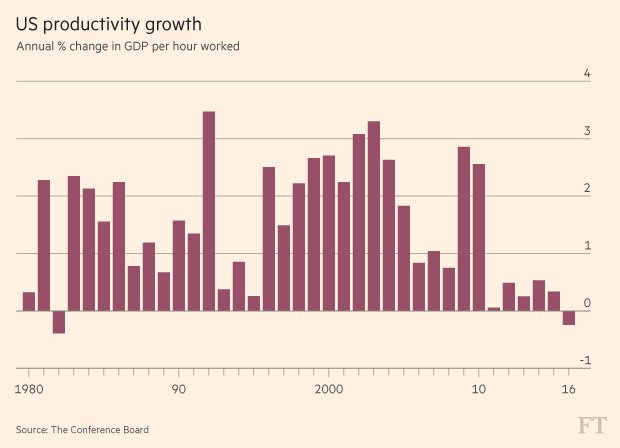 During the recent stock market rally and over the last week when the Fed has started talking about raising interest rates again the market has priced in some uptick in the probability of an interest rate rise, as shown in the green line below.

However, at the same time the yield curve has simply flattened even more and 2016 growth expectations have also fallen even further.

The market is essentially saying that raising interest rates is the wrong policy action.

Not only is policy a complete failure at this point, but pretending that its working enough to raise interest rates will only make it worse. The central banks have become outright destructive as regards economic growth at this point, even before we consider their absurd NIRP policy which is metastasizing across the world.

“The posse of fools in the Eccles Building is so petrified of a stock market hissy fit that it has more or less created a Wall Street doomsday machine.

After trolling on the zero bound for 89 straight months now, the FOMC falsely believes that it has levitated the U.S. economy to the cusp of full-employment via massive liquidity and wealth effects pumping.

As a consequence, it refuses to let the market have breathing room for even a modest correction, insisting that just a few more months of this monetary lunacy will permit a return to some semblance of normalcy.

But it never gets there. The truth is, this so-called recovery cycle is now visibly dying of old age and being crushed by the headwinds of global deflation. Rather than acknowledge that the jig is up, our feckless monetary politburo just equivocates, procrastinates and prevaricates about the monumental policy failure it has superintended.”