Each day appears to have become a kind of dysfunctional “groundhog day”. The economic data continues to show increasingly pervasive economic weakness, while the Federal Reserve sounds ever more confident that the economy is doing so well that interest rates can be raised very soon.

These two opposing narratives have been dueling for some time, but are now on a collision course. If the Fed raises interest rates this year, despite accelerating economic weakness expect market volatility to explode.

What seems to be missing in this equation is an understanding of the core problem. Debt, in all its forms, has continued to increase as it remains highly incentivized by the monetary system. However, for decades, incomes have not grown sufficiently to support the ever rising levels of debt. Even at zero interest rates it has become a significant burden to support interest payments.

Policy makers broadly ignore debt as a factor in their decision making process, so they are blind to a hugely important point. The immediate impact of raising interest rates will be to increase even further the burden of debt, and expose the weakest forms of debt to immense pressure.

The chart above may provide some very valuable clues about how the narrative dilemma will be resolved. The last two times that S&P 500 revenues went negative it signaled both a recession and a substantial decline in the stock market.

In this note I will cover just the most important information released over the last week. Then I will summarize some key long term data which I hope will clarify some very significant investment implications.

ECRI’s research has done a very good job of calling economic cycles over the years and survives solely on its ability to add value in this regard.

“The Fed’s rate hike plans are on a collision course with the economic cycle. In fact, the Fed is signaling a rate hike this year – if not by September, then by December – clearly expecting a pickup in growth. ECRI’s leading indexes suggest the opposite. Indeed, a service sector slowdown has already joined the manufacturing slowdown that started last fall, and so the slowdown in overall growth is likely to intensify in the coming months. As such, hopes for a “second-half rebound” are likely to be dashed.” 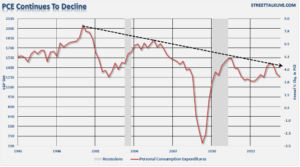 and at a range of key individual data points, there are clearly a number of issues with published BEA statistics on GDP, which most likely involve overstatement. However, the BEA statistics still say that GDP growth is very weak, and a wide range of indicators are clearly incompatible with a sustainable recovery story. This chart shows Personal Consumption Expenditure is near recent lows.

This is all happening with inventories near 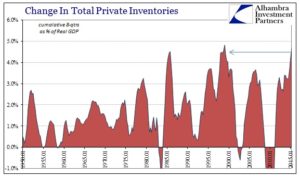 The trade deficit is surging once again. 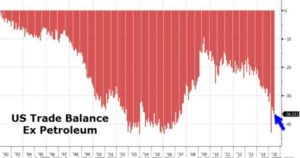 Consistent with the trade data on exports, 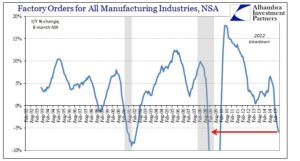 factory orders have weakened to levels only seen in recessions.

While the most stable measure of the US 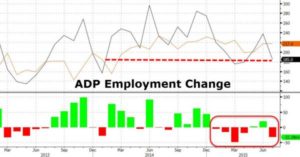 labor market, the ADP, suggests that the job market peaked around 6 months ago.

In summary, what is the bottom line for investors? 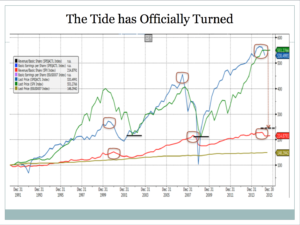 The chart here shows a great deal of very valuable long term information on the US equity market. First, it shows that both earnings and revenues may already have put in a peak.

A further very important point is that revenue growth since 2008 has been almost flat over the whole cycle.

“Now revenue growth is supposed to lead earnings growth which in turn pushes up stock valuations.  However, when revenue growth is driven by debt consumption it is temporary.  And we all learned that cold, hard fact in 2008.

But so the argument that EPS is the figure one needs to pay attention to really misses the actual driving force which is revenue based earnings growth.  The above chart depicts that while EPS has been rising significantly for the past 7 years, revenues have been absolutely flat.

And so what we have is earnings growth pushing stock valuations massively higher but without the consumer onboard.  Very different from the credit bubble.  How does this happen?

Well again, stock valuations are being pushed  higher through another temporary effect.  EPS growth is coming by way of operational contraction and financial engineering – meaning dividend payouts and share buybacks. This is evident in the following chart of just this latest bubble that depicts growth in stock valuations relative to growth in revenue per share, which have (notably) declined since Aug 08 (the base period).”

In other words, the spectacular S&P 500 rally, especially since 2011, has been the most remarkable feat of financial engineering in history. However, it has also been a temporary achievement, which at some stage is likely to be completely unwound.

“Be prepared for the now imminent equity valuation reset. It is true the Fed now has the ability to manipulate the market well beyond anything we’ve ever seen before.  However, it is also still true that when the bursting bubble achieves full momentum the Fed will be helpless to stop it.  While the Fed feels increasingly omnipotent they will once again learn, that while natural laws can be bent, they cannot be broken.”