2013 was the year where trend dominated to the exclusion of everything else. Factoring in fundamentals was likely more a hindrance rather than a help. In fact it has been some time since fundamentals like valuation and underlying economic health have been much of a factor. As David Stockman points out the S&P 500 rose 45% over the last 2 years while earnings rose by just 5%!

Just as bizarre has been the performance of gold. Despite record physical demand while gold production has begun to shrink, with Barrick Gold closing 8 gold mines this year, the gold price has had one of its worst ever years. Strangely, the negative correlation of gold with US equities has increased.

It has become obvious at this point that something beyond normal market analysis has been driving the markets. A new explanation is needed to make sense of what has been going on. To solve the puzzle and join the dots, we need to do some detective work. This is not idle history. How we got here shapes what happens next. A better understanding can provide its own reward.

First of all, when did it become clear that something had changed? Here are 4 signs that September 2011 was a clear turning point:

1. The astonishing 12 year gold bull market peaked, strangely just as new money printing, or QE, was announced in September 2011. The correlation between gold and the US debt limit broke. Since that time money printing has continued to accelerate, and we now know that the US debt level will also continue to escalate through 2017 at least. If anything these fundamentals arguably improved the case for gold. 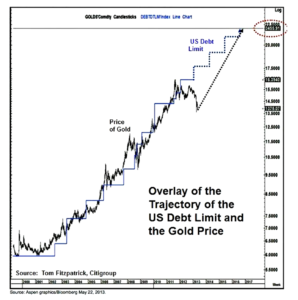 2. Earnings growth for US equities stalled, but the S&P 500 carried on rising regardless. Here is the divergence since September 2011:

3. Here we also see how the S&P 500 also started to systemically diverge from growth in the US economy from september 2011:

Since this time, flows of gold to China have exploded. 2012 imports were at record levels, but imports in 2013 have already exceeded both 2011 and 2012 combined. China has also become the biggest producer of gold and exports are prohibited.

It appears that once dollar hegemony was so clearly and persistently challenged that western policy makers had something to prove as regards the sustainability of the current financial system as well as how generally beneficial it was. From this perspective it could be useful if markets could back this up, while punishing anything that might conflict with a positive assessment. It may not work but it could at least buy some time.

QE has been an extraordinary development and has had the most remarkable 85% correlation with the S&P 500. What would have happened to equities without QE?  We can’t say for sure, of course, but you can get a pretty good idea here in this chart of the S&P 500 deflated by QE:

The problem with price fixing is that it does not solve economic problems, it just creates even more problems. Furthermore, it can never last, as natural forces will always reassert themselves over time. There is a growing chorus of financial experts saying just this and the evidence continues to mount. To any analyst who digs behind the headlines, the economy is not doing so great, and an ever smaller percentage of the population seems to be benefiting.

If the consumer is the most significant factor in the US economy it looks like Personal Consumer Expenditure is stalling at best:

f credit growth is the driver of the consumer in the current economic system there seem to be problems here also:

The final problem the market has is that valuations have become so extreme that the strategic math of long term investment in the S&P 500 no longer makes much, if any, sense. Yes, the magic of QE could rally the market further, but don’t kid yourself about the return to risk equation at a CAPE (Cyclically Adjusted Price/Earnings Ratio) of 25, which is currently the highest valuation in the world. If you want to examine this point further, there is no better analysis than this:

If you would like a more realistic assessment of the markets and the US economy then here is an audio interview with Eric Sprott:

How do we get out of this predicament? There are only so many options, all of which are covered here:

What is to be done with an investment portfolio?

The short answer is a value and momentum adjusted all weather allocation.