But the New Normal is anything but normal; “All the readings of artificial life-support and manipulation are off the charts.”

“central bankers have lost their marbles”

Now the economic cycle is developing another new problem in the emergence of growing stagflationary trends.

Who could have guessed that the job numbers would weaken?

There is really very little mystery about the current economic cycle. The sequence of developments is very standard and straight forward. Really nothing very unusual. If policy makers were really economic “data dependent” it should be blindingly obvious to them too.

Nevertheless, this simply story is not accepted. So policy makers have morphed into alternative reality promoters, who will apparently use any and every means at their disposal to support their “New Normal” narrative.

Unfortunately for policy makers the task is ultimately impossible, and at some stage their efforts just look ridiculous. ECRI explains why.

Policy makers have become so committed to their own narrative that they have become not just delusional but also blind to the absurdities of the “New Normal” they have created. “All the readings of artificial life-support and manipulation are off the charts.”

“Anyone questioning the sustainability and rightness of The New Normal is immediately attacked by the mainstream-media defenders of the crumbling status quo. Not only is everything that broke in 2008 fixed, everything’s going great globally, and anyone who dares question this narrative in a tin-foil hat conspiracy nut or simply an annoyingly doom-and-gloomer who recalcitrantly refuses to accept the positive glories of official statistics: low unemployment, rising valuations of stock market Unicorns, etc. But the New Normal is anything but normal; all the readings of artificial life-support and manipulation are off the charts.

If the New Normal were indeed a return to normalcy, we’d see a rapid and sustained decline in official life-support of the economy.

Instead, we see official life-support efforts rising to new and dangerous levels.The only reason stocks are at nose-bleed valuations globally is massive, sustained intervention on multiple levels.”

“central bankers have lost their marbles”

“It would be nice to know when the rest of the world will come around to the gold-friendly view that central bankers have lost their marbles.”

Now the economic cycle is developing another new problem in the emergence of growing stagflationary trends.

Perhaps policy makers think they can ignore this too. However, sooner or later the economy will have to resolve its problems whatever the central banks want to pretend. certainly TIPS (Treasury Inflation protected Securities) have noticed something.

Who could have guessed that the job numbers would weaken?

All you need to do is look at this chart. No PHD required. 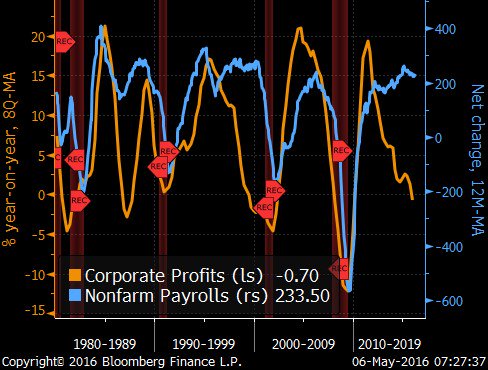 Margin debt is rolling over

Possibly the greatest investor of all time was unusually blunt this week.

“Moments ago at the Sohn Conference, Druckenmiller raged at the Federal Reserve’s dire monetary policies, saying that low interest rates have caused an environment where “not a week goes by without someone extolling the virtues of the equity market.”  The obsession with short term stimulus contrasts with the monetary reform of 80’s which led to the bull market, he added.

Wrong: this is the most data-dependent Fed ever, only the data is the daily level of the Dow Jones Industrial Average; this is also why as Druckenmiller added, the Fed “causes reckless behavior” and added that “the Fed has no endgame and the end objective seems to be preventing the S&P from having a 20% decline.”

“Three years ago on this stage I criticized the rationale of Fed policy but drew a bullish intermediate conclusion as the weight of the evidence suggested the tidal wave of central bank money worldwide would still propel financial assets higher. I now feel the weight of the evidence has shifted the other way; higher valuations, three more years of unproductive corporate behavior, limits to further easing and excessive borrowing from the future suggest that the bull market is exhausting itself.”