“We’ve finally reached the beginning of the end of this grand policy experiment. As a politician, all you can do now is panic & print. No, you can’t print growth. I think that’s why the plannings, panics, and printings are all accelerating again. Global growth is slowing.”  – Keith McCullough

The header chart shows the manic intervention of the Chinese authorities in their stock “markets”, on more than a daily basis. Rule changes have come thick and fast as stocks that go down are “halted”, short sellers are openly threatened and banks and brokers are fueled with excessive margin debt for buyers. What the Chinese authorities have missed, however, is that they have destroyed confidence in their “markets”. Real capital is fleeing and won’t return for years. Not only have their policies failed they have lost investors and credibility for years.

The most troubling part is that this has become a pattern in policy across the globe. Policy makers do not seem to have the institutional capability to adjust their concepts to incorporate the central problem that too much debt leads to very weak growth.

Their policies have even managed to accelerate the debt further, compounding the problem at an accelerating rate and trapping themselves in near zero interest rates and ever failing forecasts. Now the signs of policy failure are rising.

Now the Chinese have exposed the self-defeating tragedy of making the markets themselves a central component of their failed policies. Targeting markets compounds the problem even further as reliable market function is itself an essential basis for a growing economy. As George Gilder explains in his new book:

The economy is not fundamentally an incentive system, it is an information system. Manipulating money cannot create growth, and it distorts the information economic actors need to acquire the learning that alone is wealth-creation.

Growth in wealth stems . . . from the progress of learning. It is accomplished by entrepreneurs conducting falsifiable experiments of enterprise, with the outcomes measurable by reliable money.”

In the US, the Fed’s forecasts have been too high for 6 years and now their guidance seems to be at odds even with its own forecasts. The level of the Fed’s inflation and growth forecasts are below its objectives and are declining sequentially, but rather than any consideration of easing policy the Fed continues to talk about raising rates! Is this just an attempt to talk up the markets and/or an attempt to deny failing policies?

Just take a look at the chart of 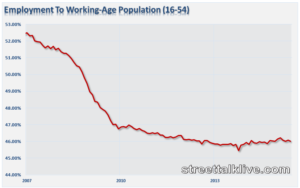 Employment-to-working age population for 16 to 54 year olds since 2007, and explain how this fits a narrative of a strong recovery needing higher rates.

Even without the recent outspoken policy criticisms from the BIS it should be clear that policy across the world is losing credibility, as growth consistently fails to materialize. 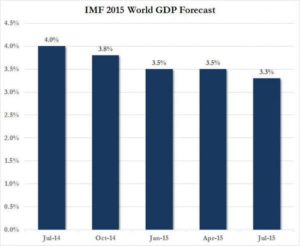 The IMF has just revised down its 2015 world growth forecast yet again. This shows that there is a common growth problem across the globe. All the central banks are still using the debt driven growth model, recently described as “faulty” by the BIS.

However, the IMF is just catching up with what has already happened.

Hedgeye goes into enormous detail analyzing where the US economy is shifting as regards growth and inflation. For sure growth is slowing which means that the US is in either Quad 3 or 4 depending on whether inflation is going up or down. The inflation reading suggests it is rising slightly, so the US is currently in Quad 3, but recent downshifts in commodities and other factors suggest that Quad 4 is close.

More simply as this chart 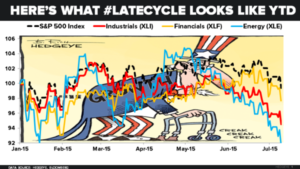 shows the markets have already begun to reflect this model, “ you needn’t require a sophisticated multi-factor, multi-duration quant model to tell you that global growth is slowing. Just pull up a chart of global industrial, financial, basic materials and/or energy stocks – all of which are down for the YTD at the sector and/or subsector level (e.g. XLI, IYT, XLF, XLB and XLE).”

This could mean that markets may be about to repeat Q3 last year. In 2014 the growth slowdown was met by massive new stimulus from both the Bank Of Japan and the ECB. However, it seems that this has not produced the hoped for global economic lift-off, and failing to escape this low growth dynamic seems to be repeating in 2015.

For a deeper explanation why, here is Steve Keen’s latest video which, like the BIS, suggests that central banks do not have a solution, but also provides a very compelling rationale for this policy failure, and also what may be more realistic to expect in the future.

My own models are also pointing to extreme uncertainty and caution.

Based on my Cycle Dynamic (CD) models current market trends have become uniquely absent across all asset classes. This comes at a time when short term uncertainties are extraordinarily high, most obviously in Europe and China. No doubt this is a good time to limit risk.

CD portfolio trend indications are almost completely absent at this point, which is unique over the last 7 year period. Both the Asset and Commodity selectors are completely in Treasury Bills. This has never happened before in the last 7 years! The Bond selector is only 50% allocated to 5 year Treasuries, and the US Equity selector has only 2 sectors chosen, but it also has a short position in the S&P 500, so this is only a 20% net allocation. Overall the suggested allocation across the four models has never had a lower risk profile, going back to the beginning of 2008!

For a long only investor this signals a very low risk, patient, and disciplined stance to portfolio allocation at the current time.