Global growth is uniquely challenged with PMIs in significant downtrends at the same time in the US, China, Japan and Germany.  The US is the only one of these 4 countries where the PMI is not already in outright contraction. 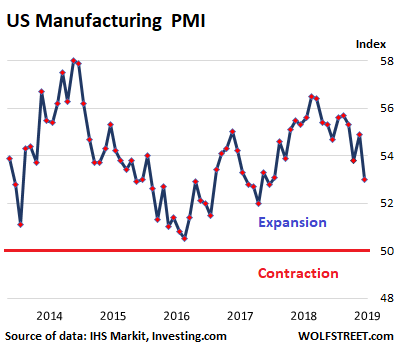 Policy makers, as usual, have responded with massive amounts of debt and liquidity.

“The U.S. budget deficit widened to $310 billion in the first four months of the fiscal year, underscoring the revenue hit from Republican tax cuts and an increase in government spending.

The budget gap widened 77 percent compared with the same October-January period a year earlier, according to the Treasury monthly budget report released on Tuesday, which was delayed by the government shutdown. Receipts fell by 2 percent to $1.1 trillion, while spending rose 9 percent to $1.4 trillion.”

The chart below shows how, with the debt acceleration, the global money supply has so far reversed the decline in the S&P 500. 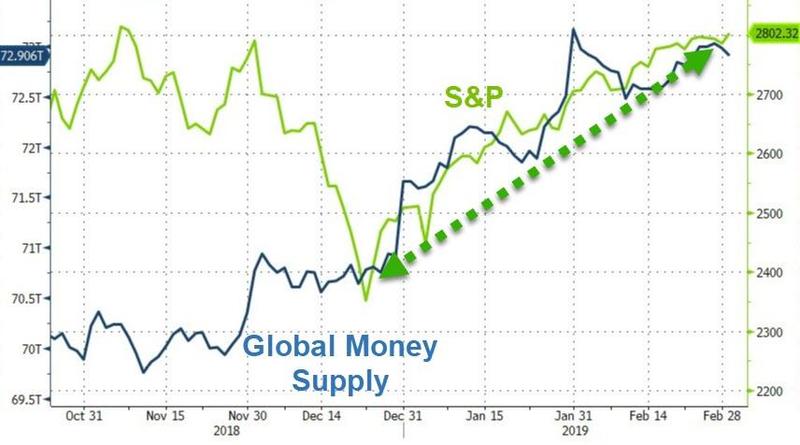 Central bank action has broken the correlation the US equity market had with earnings expectations.

The chart below shows that the economy can only finance the exponentially rising debt, shown in previous notes, through a multi decade downtrend in interest rates. However, the scale of debt is now so big that even with interest rates falling close to zero, interest payments are now in an accelerating uptrend.

The debt burden increasingly strangles the economy if interest rates rise, as was clear just last year, as described in these notes.

This problem is becoming obvious, so much so that many past policy makers no longer see the central banks as having sufficient ammunition for the next recession.

With debt and interest rates approaching their limits, central banks will increasingly have to rely on money printing.

In the meantime, investors now have to navigate a stock market that can move up or down by 20% just on the central bank’s ability to use their clumsy policy tools.

From Risk To Instability To A New Strategy

As I have stated before, investors need to factor in to their strategy the accelerating risk and instability we have begun to experience.

Global central bank policy has become increasingly ineffective and, at the same time, a growing wildcard in market behaviour. Have central banks now become a destabilizing force in the markets?

I believe it is vital for Investors to review their strategic investment approach and  priorities. Then learn how to adapt to the new circumstances by selecting a strategy that can turn instability into a low risk manageable opportunity.

For 10 steps towards a strategic portfolio transformation pick a time to talk: