Bernanke meets Abe this week. What did Einstein say about insanity?

Why be constrained? How about unlimited asset purchases?

Central banks: Nothing Else Matters If We force Stock Markets Up

Every major economy is slowing according to ECRI

Dr. Lacy Hunt invokes Einstein’s Definition. “More of the same does not produce better results. It produces worse results, a situation we term a policy trap.”

Bernanke meets Abe this week. What did Einstein say about insanity?

Despite persistent policy failure for decades central bankers believe there still must be more to do in Japan following Abe’s recent election win. Bernanke explains why no amount of persistent failure can deter them!

“Bernanke in April published on his Brookings blog that, while there were many challenges behind such a strategy, a “monetary financed fiscal program” shouldn’t be ruled out in the case of an emergency in the U.S.

“Under certain extreme circumstances — sharply deficient aggregate demand, exhausted monetary policy, and unwillingness of the legislature to use debt-financed fiscal policies — such programs may be the best available alternative. It would be premature to rule them out,” Bernanke wrote. 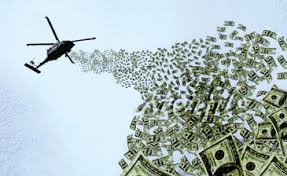 Just in case there was any doubt that this was an acceptable policy prescription the Fed’s Mester echoed this idea. Not just for Japan, but for the US too!

Why be constrained? How about unlimited asset purchases?

Central banking disasters need new scope…. They can buy unlimited amounts securities. So many in fact that they get absurdly expensive, real investors sell, and the world starts to run out of securities!

Whenever policy seems to be failing and markets are falling, why not just buy everything until the markets go up? The chart below shows that the January market collapses were met by the biggest central bank buying spree since 2013!

Then the central banks can simply say “Crisis? What Crisis?”

“when you replace savers with central bankers at the very heart of the price discovery process in financial markets, the system eventually goes tilt. You go upside down.”

“… central banks and speculators together have driven the yield on nearly $12 trillion of government debt—or nearly 26% of total outstandings on the planet—into the subzero zone. This includes more than $1 trillion each of German and French government debt and nearly $8 trillion of Japanese government debt.”

This video of Larry Fink is well worth the 2 minutes it takes. he clearly identifies the true force behind the recent stock market surge is a familiar one: central banks.

“Fink said extraordinary central bank asset purchases has been inflating stocks prices. “I don’t think we should be at new [stock] highs,” he said. “All the stock repurchases, you’re seeing this reduction in investable assets.”

“We are seeing investors worldwide pausing, we are seeing quite a large sum of money being pulled out of equities over the last year. And yet we are at record highs. That’s just a sign of how much money is being taken out by central banks in their bond purchases, and stock repurchases from companies.”

Central banks: Nothing Else Matters If We force Stock Markets Up

“There are still some who live in the fantasy world of fundamentals, earnings, macro business-cycles, and efficient markets… for everyone else, we offer the following seven charts to explain what really matters in the new red-pill normal… are you ready to find out how deep the rabbit hole runs?

Every major economy is slowing according to ECRI

The trouble is that now market signals are being so distorted they are increasingly moving independently from clear cyclical signals. This video does a great job of explaining how cycles are no longer being reflected in markets in any clearly recognizable way. The central banks don’t want to allow it!

The challenge for investors is therefore substantial.

Dr. Lacy Hunt invokes Einstein’s Definition. “More of the same does not produce better results. It produces worse results, a situation we term a policy trap.”

“Real per capita GDP has risen by a paltry 1.3% annualized since the current expansion began in 2009. This is less than half of the 2.7% average expansion since the records began in 1790. One of the most persistent impediments to growth has been the drag from fiscal policy, a constraint that is likely to become even more severe in the next decade. The standard of living, or real median household income, has only declined in the 2009-2016 expansion and stands at the same level reached in 1996.

Six considerations indicate federal finance will produce slower growth: (1) the government expenditure multiplier is negative; (2) the composition of spending suggests the multiplier is likely to trend even more negative; (3) the federal debt-to-GDP ratio moved above the deleterious 90% level in 2010 and has stayed above it for more than five years, a time span in which research shows the constriction of economic growth to be particularly severe. It will continue to move substantially further above the 90% threshold as debt suppresses the growth rate; (4) debt is likely to restrain economic growth in an increasingly nonlinear fashion; (5) the first four problems produce negative feedback loops from federal finance to the economy through the allocation of saving, real investment, productivity growth and eventually to demographics; and (6) the policy makers force the economy into a downward spiral when they rely on more debt in order to address poor economic performance.

More of the same does not produce better results. It produces worse results, a situation we term a policy trap.”