How Japan Is Fueling The US Treasury Market Collapse

The US Treasury market is in its largest drawdown of the last 20 years and yet still stands at near record low negative real yields. The 10 year Treasury bond yield is still more than 5% below the annual gain in the CPI. The statements from the BIS above suggest that central banks have gone “cold turkey” on their extreme policy interventions of recent years, but the real story is never quite that simple. 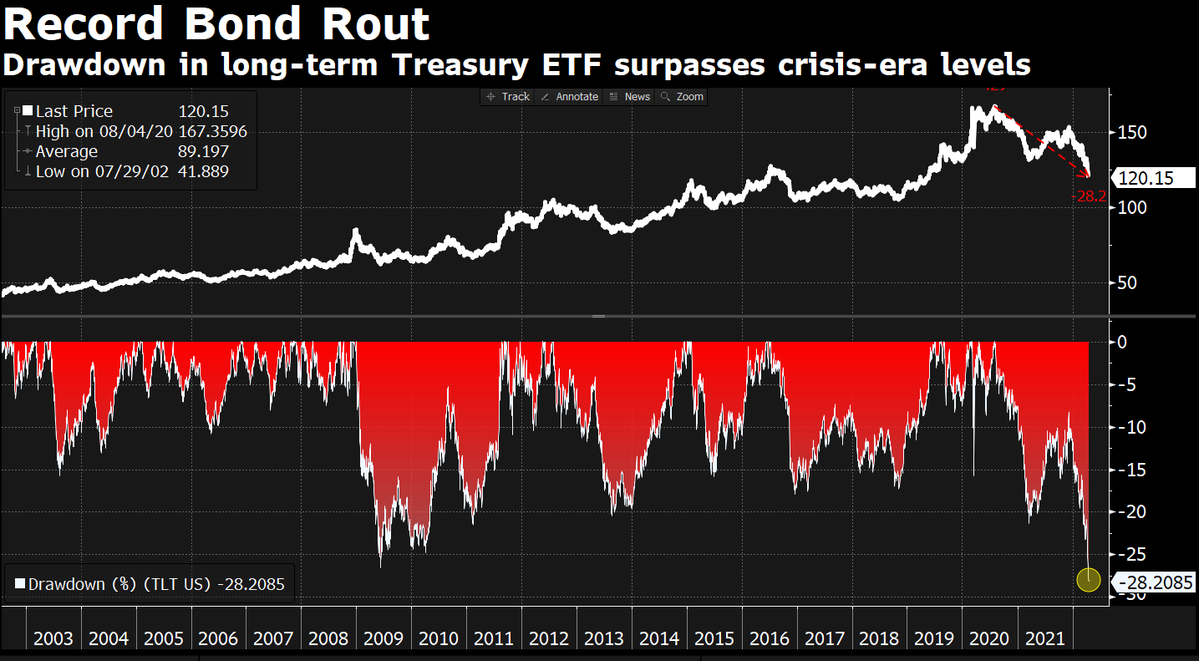 Central Bank Policy has been trying to compensate for weak global growth ever since 2008. Policy measures have twisted and turned over the last decade or so but have only achieved temporary respite in terms of growth, while at the same time their ever growing interventions have introduced massive market and economic distortions that have continued to compound.

While these efforts have bought time, there has been a consistent build up of debt. This debt load complicates how central banks address a new inflation problem even as global growth has begun to weaken once again.

The two BIS quotes above reflect conflicting policy stances at the center of world central banking. The alarm at the weak state of growth in 2019 made the central banks ready to launch extremely supportive stimulative policy through the Covid crisis. However, by April 2022, the central banks now seem to have changed their priorities to inflation, but without clear evidence that the long term weak growth issue has been resolved. Far from it.

Central Bank policies now have to address two policy problems, weak underlying growth and too strong a level of inflation. The challenge now is to have a tight enough policy to contain inflation while at the same time continue to support growth. Unfortunately for the central banks, the policy remedies they have for both issues are broadly the same. If policy tightens too much it will help contain inflation but weaken growth at the same time. Hit one mole and the other one will pop up!

Getting policy “right” will require constantly threading the needle in a complex and ever changing world, with only blunt economic instruments that operate with leads and lags. Sooner or later there will likely be an accident.

Catch 22 for the Yen and the Bank of Japan (BOJ)

The country with the longest and deepest experience of these central banks “stimulus” measures is Japan. The Japanese stock market peaked in 1989 and yet still has not managed to return to those highs. A passive investor nightmare!

Needless to say Japan has struggled with growth all this time but never had a major inflation problem, at least until now. The debt accumulation has been massive and the main purchaser of much of this debt is the BOJ.

This means that the BOJ has a major stake in not upsetting the markets with higher bond yields reflecting the new inflation. Not only is this the core of their economic support policy, but the BOJ is the owner of a massive bond portfolio, with bonds bought mainly at near zero and even negative yield levels.

A bond bear market would mean immediate insolvency as well as an end to its multidecade economic policy.

As this chart blow shows, the BOJ has been operating with yield curve control since September 2016. This means that the BOJ will buy bonds whenever bond yields reach the upper limit they set. 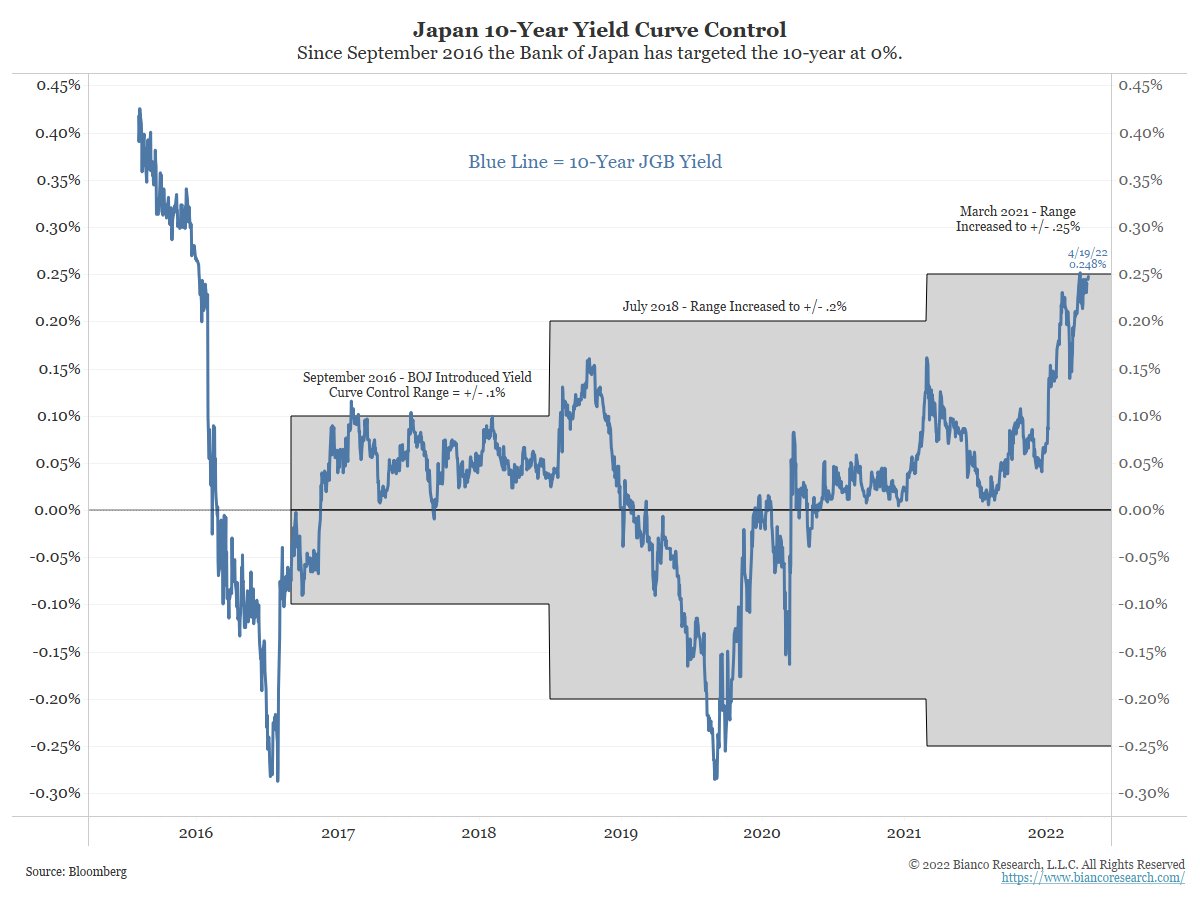 But this JGB intervention is coming with a high cost. The Japanese Yen has been collapsing (a rising line on the chart below). See the orange box. This is one of the biggest one month moves ever in the Yen. A complete surprise to most. 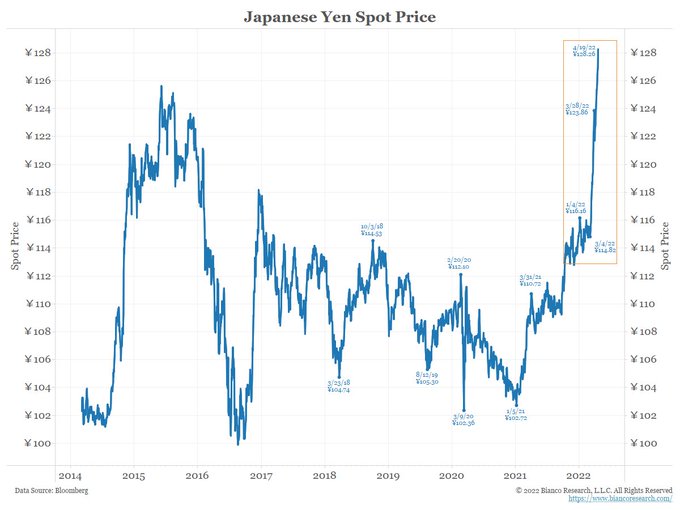 Holding the line at the current bond yield level requires purchases, which can only come from either printing money, which adds to inflationary pressure, or selling some of Japan’s vast holdings of Treasuries. It looks like the latter method is preferable, see the chart below, as the correlation strongly indicates, sustaining low Japanese government bond (JGB) yields at a time of accelerating record inflation is creating capital flight out of Yen into dollars. The BOJ can support both the Yen and the bond market by selling Treasuries to buy JGBs. 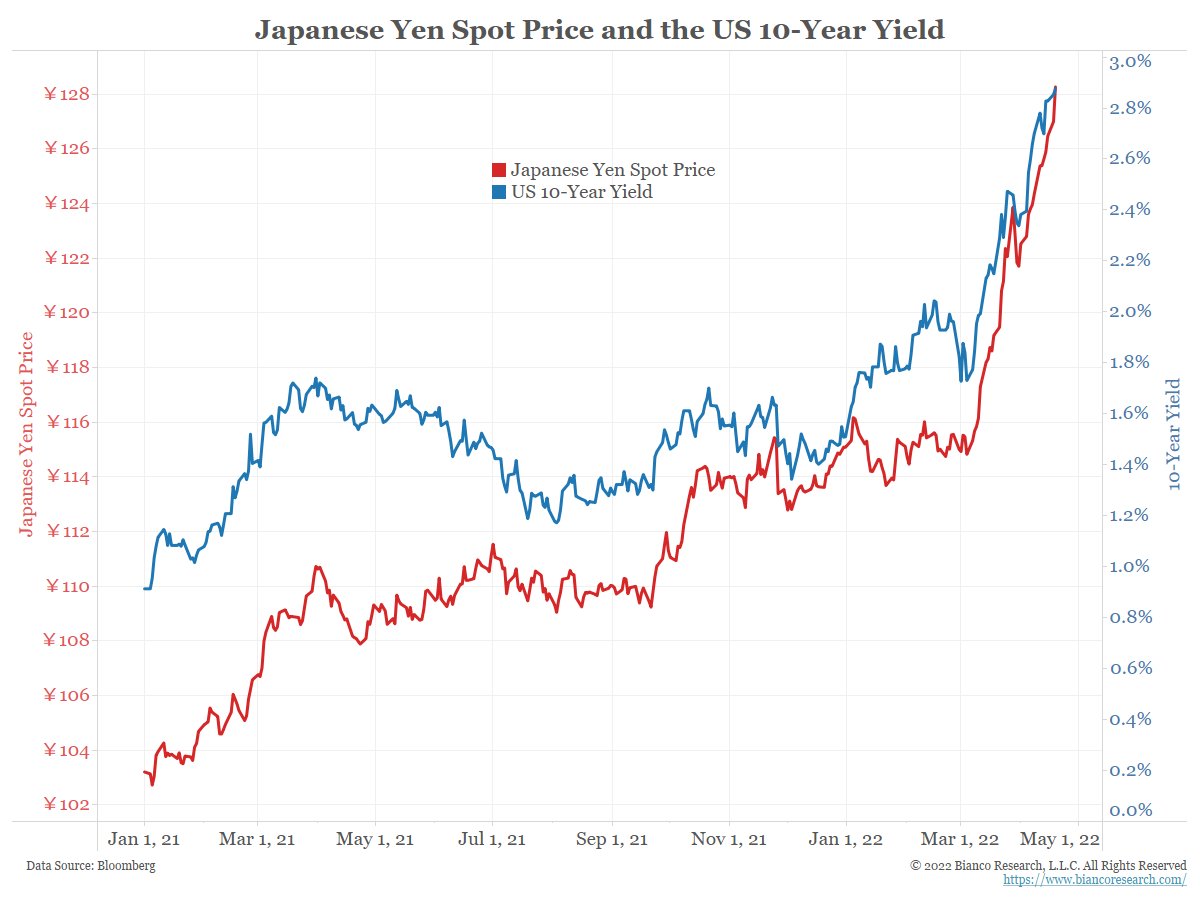 Many economists (incl Lael Brainard) matter of factly promote yield curve control as a legitimate policy tool. The problem is it works until it blows up. This is what happened to Australia’s YCC last year, it blew up…badly.

Is YCC now “blowing up” in Japan? 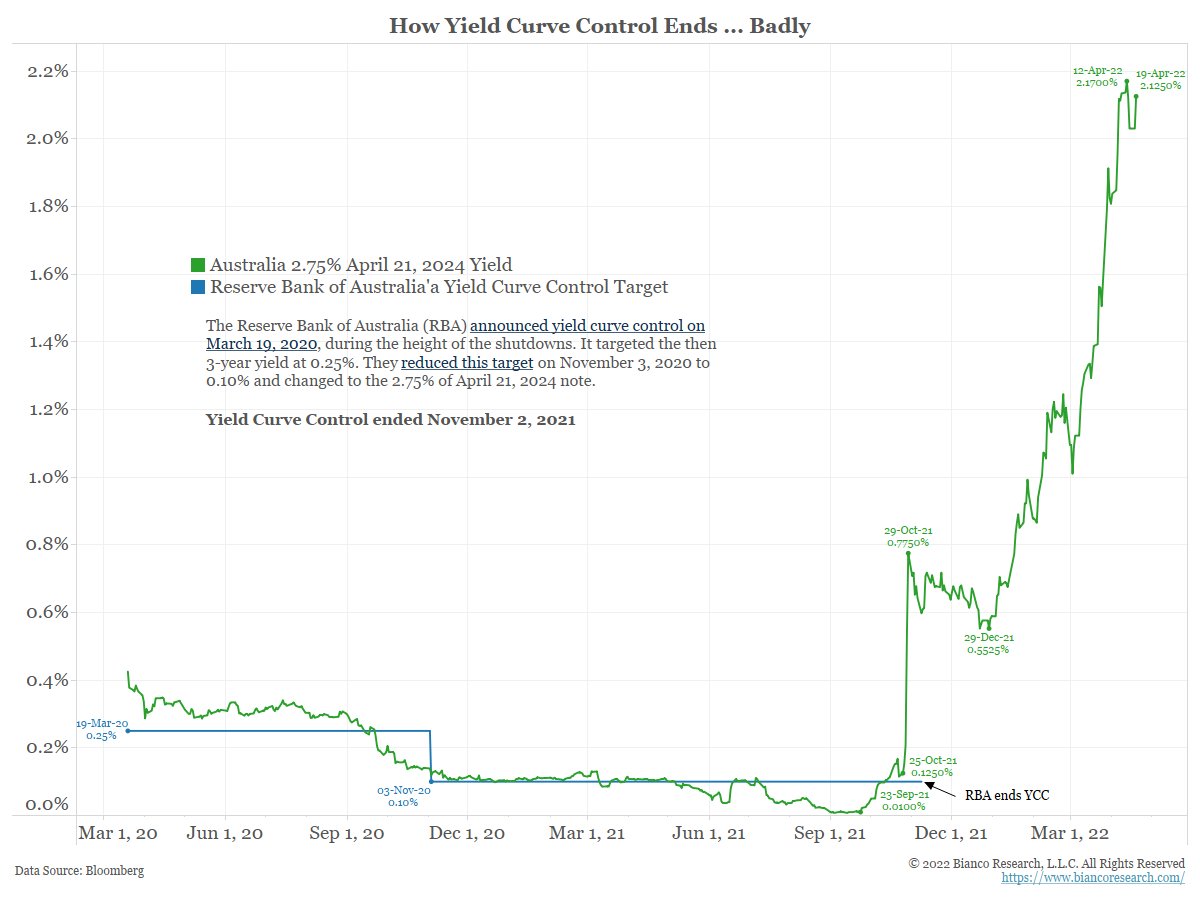 Inflation is already causing major central bank problems. Bond yields are reacting faster than central banks are comfortable with and it is also travelling from one country to another through the exchange rate. Central banks have so far been very slow to address inflation, so the bond markets are forcing the pace.

This has resteepened the yield curves, as the short end has remained tethered to low central bank rates. The recent steepening may not reflect renewed growth prospects so much as central banks moving too slowly, and bond yields still offering no realistic prospect of positive real returns.

European bonds may be next. The ECB will likely also be slow to tighten policy according to their latest meeting, and so far the Euro is also weakening against the dollar in like manner.

This is despite inflation pressures being at least as high as in the US, and current interest rates lower. 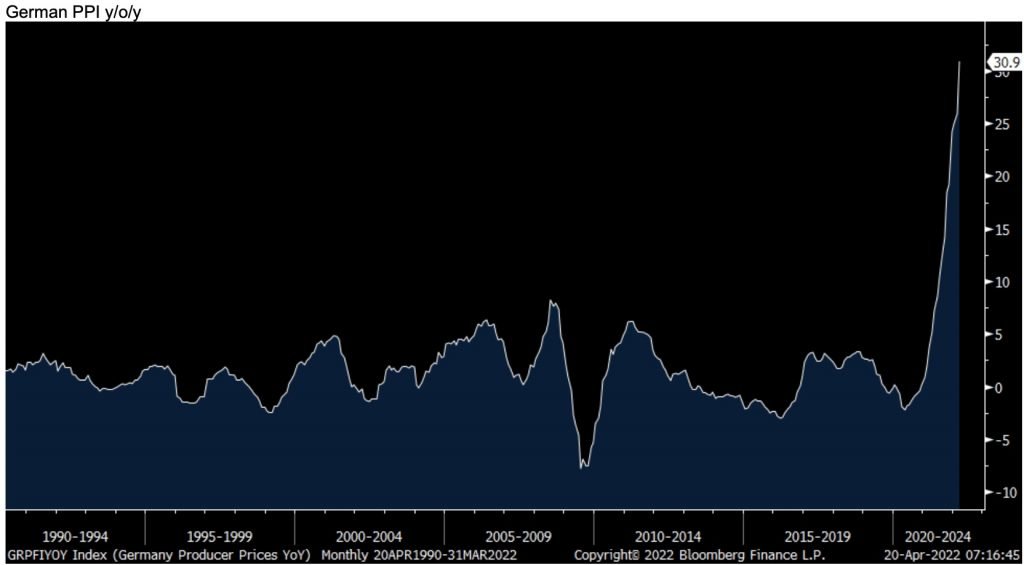 Higher bond yields may reflect the slowness of central banks to execute the tightening they need to do, and the lingering economic stimulus that results from still record negative real interest rates. Current interest rate policy remains stimulative, and inflation has yet to peak.

The bond markets are also correcting the bond overvaluation created by the Trillions of central bank buying since 2008.

The central banks have still not got ahead of the inflation issue. Not even close, as has been discussed before in these insights. Historically, real interest rates need to get close to matching real economic growth for that to be the case, and that remains a distant prospect.

TIPS still look like a great allocation relative to Treasuries

While Central Banks continue to struggle with their “whack-a-mole” predicament and investors are confronted with still sizeable negative real yields on bonds, TIPS now have positive real yields, and will likely continue to outperform with lower volatility, and a rare and clear long term positive expected return. See our prior March 2022 market note insight.

Beyond bonds high quality durable businesses are still able to make new highs, but the pressure is still rising for most equities. Growth challenges and higher corporate bonds yields look set to continue. 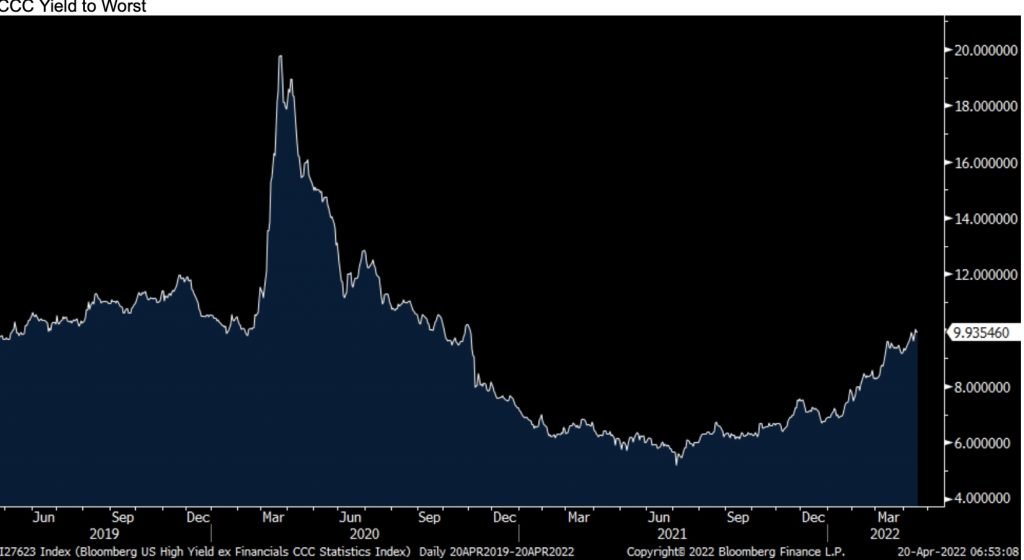 Also, earnings so far this quarter are not coming in strong. 67 of the SP500 have reported an aggregate Q1 EPS decline of -7.6% year-over-year, and earnings are highly likely to decline further in Q2. 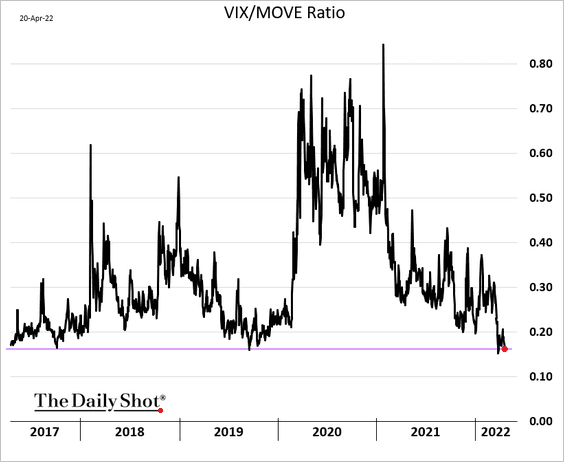 Inside the equity market industry rotations are indicating a sharp economic slowdown has yet to come. 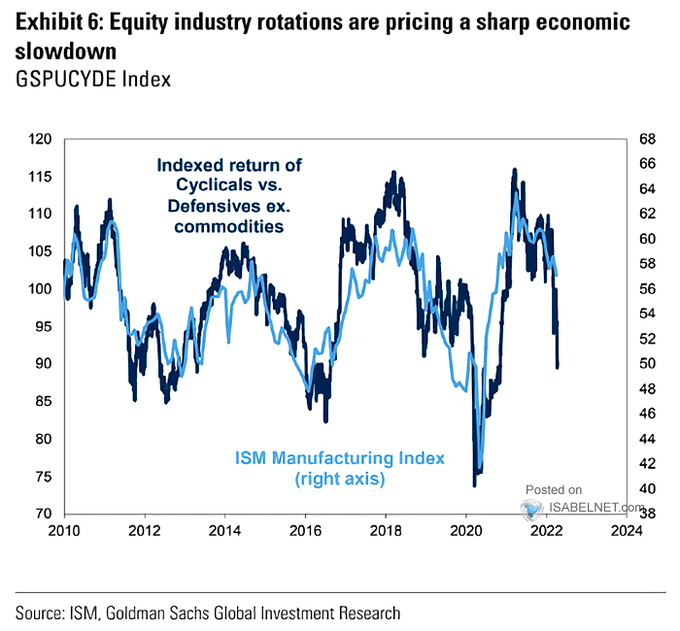