The Fed will have to “leave credibility in shreds to avoid a catastrophe” – Jim Rickards.

For all of 2015 the Federal Reserve has 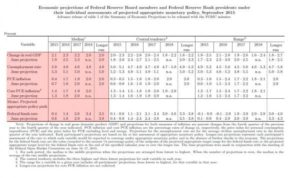 persisted with it’s guidance to raise rates before the end of 2015.  Yet to seasoned observers like Jim Rickards the outcome of this weeks FOMC meeting seemed clear well in advance.  The quote above was taken out of an interview earlier in the week, prior to the meeting. Once again this viewpoint prevailed when the Fed had to climb down from its guidance and forecasts once again and leave interest rates unchanged, as has been the case for nearly 7 years now.

Last week’s note showed how isolated the Fed had become on its policy guidance. The Fed clearly acknowledged the international dimension in it’s statement, however, there were still no concessions on its central policy thinking. However, it is crucial for investors to delve more deeply into this issue.

In this regard, the highlight of the week was a one hour interview on Bloomberg, a day before the Fed announcement, with the manager of the world’s largest hedge fund, Ray Dalio of Bridgewater. Here is a short clip from that interview showing his growing concern and incomprehension on the approach taken by the Fed.

In essence by focusing so much on the short term debt cycle, the Fed is missing the more significant long term debt cycle. This goes a long way to explaining it’s persistently too high growth and inflation forecasts. It also means that when the Fed is finally confronted at its meeting by the decision to raise rates it realizes that raising rates has become a huge gamble. 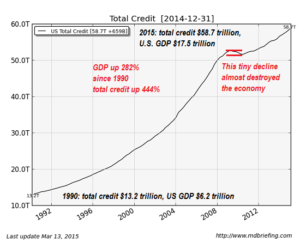 Taking this risk when world growth is already very weak and many emerging markets are already experiencing severe economic predicaments is an immense risk.

Another new problem the Fed must realize is that should another crisis occur the Fed now has far fewer policy options. Once again Ray Dalio explains that QE will have a much smaller impact in the future, and is already a spent force in Europe and Japan.

There is nothing wrong with a positive 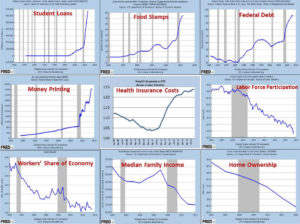 constructive outlook for just about any walk of life. However, it does need context and some dose of reality in order to be able to become genuinely productive. Without a sound anchor to the financial system, generating short term cycles with credit growth are a poor basis for lasting and sustainable prosperity. Forever highlighting positive aspects in short term cycles may merely distract attention from deteriorating longer term trends.

Ray Dalio is right to worry about the long cycle, particularly as the Fed seems so intent on ignoring it, along with the consistent failure of it’s short term forecasts for 6 years in a row and, as a consequence, producing persistently misleading interest rate guidance.

Central banks have been fighting long 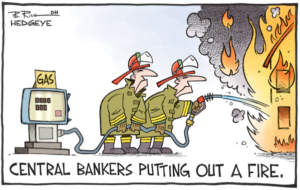 Central banks have begun to realize that forcing a short term debt cycle is becoming futile. Over time they are likely to revert to being followers of economic cycles rather than partial drivers.

Investors should therefore increasingly focus on the key economic cycle drivers and worry less about the central banks.