Imagine … its not easy to do.

John Hussman does a great job of explaining the astonishing series of policy errors that have led to the most extreme and unstable economic and market conditions in history. Two decades ago it might have seemed impossible that policy would have travelled down the road it has. Even now it is difficult enough to imagine, even though much of it has already happened!

Rather than admit their errors and address the fragility of the current predicament, central banks continue to press on, even as their narrative becomes ever more absurd and erratic.

The Federal Reserve is now simply living in fear of blowing up the asset bubble they themselves created. The Federal Reserve is just left with verbal contortions and inconsistent rationalizations. This week’s testimonies from Fed chair Janet Yellen demonstrated once again that this is where we are.

The video below points out that we are clearly all dreaming if this is an acceptable risk management process for global economic policy.

And is Janet Yellen now even unable to admit the truth about her own labor market indicator?

Investors need to stand back and recognize how far off the map we are.

“There is absolutely no economic rationale for the Fed to maintain its balance sheet at the present size of $4 trillion except to maintain a speculative flamethrower in place; indeed, one that threatens to encourage a yield-seeking bubble large enough to throw the U.S. into another Great Depression when it bursts.

The chart below shows the median price/revenue ratio of S&P 500 component stocks, which recently pushed to the highest level in history, exceeding both the 2000 and 2007 market peaks. In recent quarters, the broad market has deteriorated, even in the most reasonably valued decile of stocks, but the most richly valued decile has held up for a last hurrah, as it did near the peaks of previous bubbles. This dispersion has created a headwind for hedged-equity strategies in U.S. stocks, particularly value-conscious strategies, but investors should understand that beneath the surface of this short-term outcome is singularly the most extreme point of overvaluation for the median stock in history.” 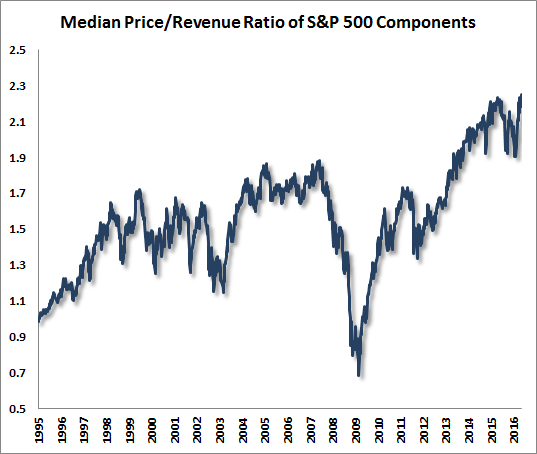 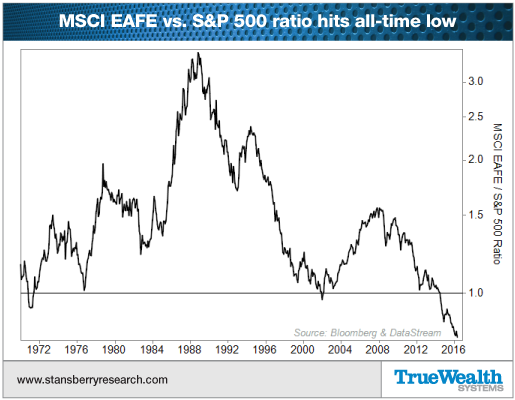