IMF Warns On US Policy. Markets Depend On US NOT Fixing It.

No wonder the IMF has been forced to speak up on US fiscal policy. US finances have taken an extraordinary turn in the last year or so, and we are only just beginning to see the effects. 3 charts show clearly the direction this is going.

The first chart below shows the sharp rise in Federal interest payments. With rising interest rates AND exploding deficits as far as the eye can see this can only go in one direction. It will not be long before this is the biggest item in federal government expenditure, even exceeding defense.

The second chart shows that the CBO is now projecting the possibility of $2 Trillion budget deficits within 10 years, assuming no change in current policy. 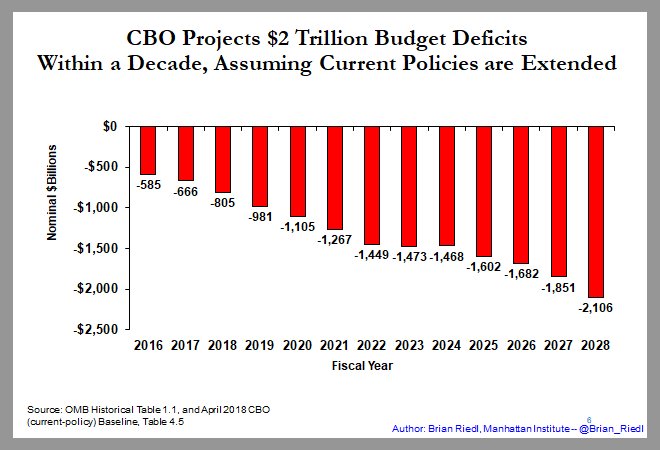 The third chart shows the recent sudden increase in the quarterly budget deficit. What is remarkable about this increase is that it is happening after 7 quarters of rising GDP growth.  Accelerating deficits on this scale during one of the longest economic upcycles is unprecedented.  One has to wonder where the deficit will go during the next recession! 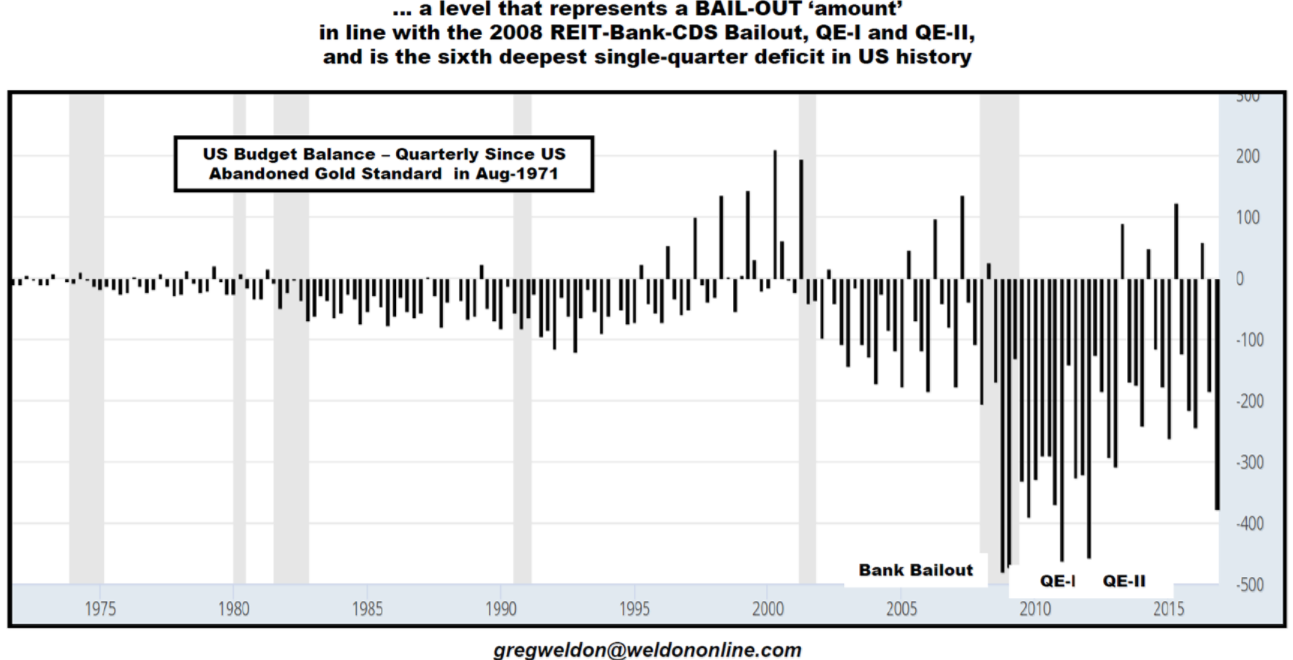 The IMF report singles out the US as a “stands out” problem.

In the United States, the revised tax code and the two‑year budget agreement provide additional fiscal stimulus to the economy. These measures will give rise to overall deficit above $1 trillion over the next three years, and that corresponds to more than 5 percent of U.S. GDP. Debt is projected to increase from 108 percent in 2017 to 117 percent of GDP in 2023. If tax cuts with sunset provisions are not allowed to lapse, public debt would climb even higher.”

Naturally, the IMF tends to be careful in how it states its views and so a more policy independent analysis may be helpful to balance the IMF report. It is possible to paint a more disturbing long-term outlook to view how public finances will evolve. This can be a useful exercise as a stress test exercise. Here is a report from the Awara Group:

Federal budget interest expenditure could reach $1.5 trillion by 2028, 25% of the total

There has been no real GDP growth since at least 2007

US reporting on national debt and inflation full of tricks

So much for the federal financial situation. State and local government finances also have significant challenges and will have to be considered another time. Suffice to say that, in general, taxes are rising and so are adding to financial pressure and are unlikely to be able to provide much relief.

Outside the enormous explosion of federal debt, private sector credit growth is really the main driver of economic growth.

In last week’s note I showed the weak and deteriorating middle class balance sheet, so the situation is already very challenging in terms of voluntary demand for credit. This is not a good set up for strong credit growth conditions, which in aggregate has remained very weak since 2008 as shown below.

The deepest and widest analysis on credit growth comes from Richard Duncan, 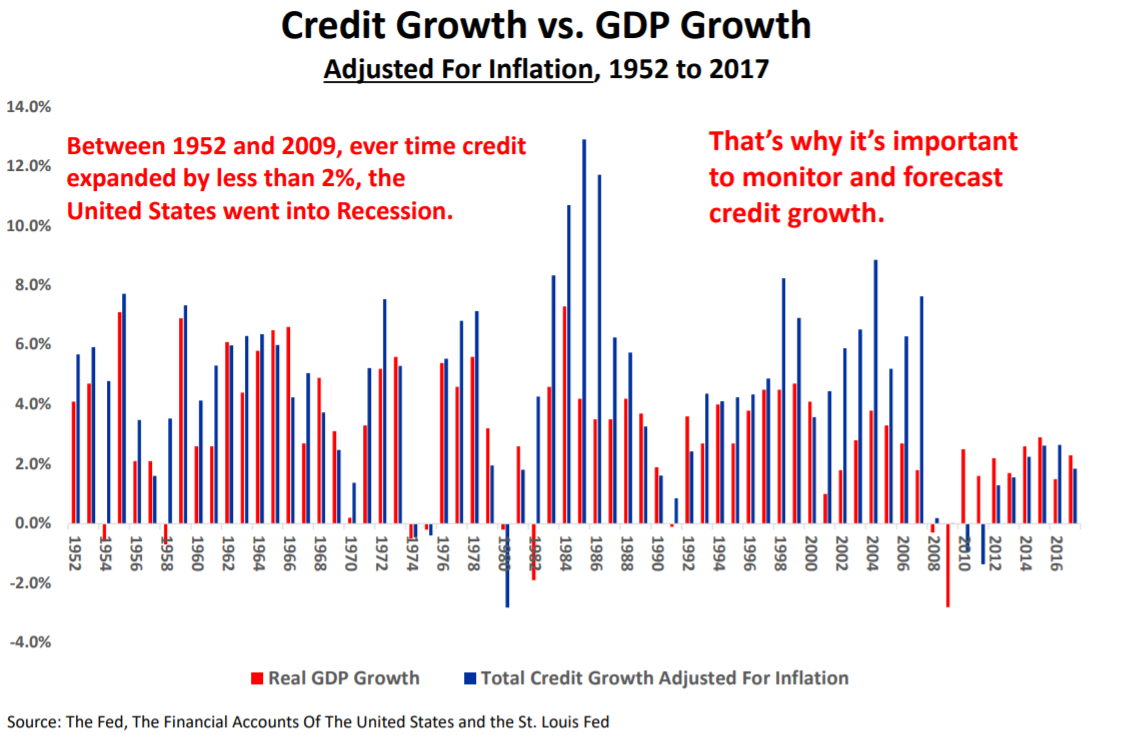 “When credit growth is weak, the United States falls into recession. Between 1952 and 2008, there were only nine years when total credit (adjusted for inflation) grew by less than 2%. Each time, there was a recession. In 2017, total credit grew by just 1.9%. This was the first time credit growth has fallen below the 2% recession threshold since 2013.

The latest Macro Watch video forecasts US credit growth out for the next three years by considering the outlook for borrowing by each of the major sectors of the US economy.  With inflation trending higher, it looks as though credit will expand by only 1.7% a year during 2018, 2019 and 2020.  If those forecasts prove to be correct, the chances are high that the United States will soon fall back into recession. 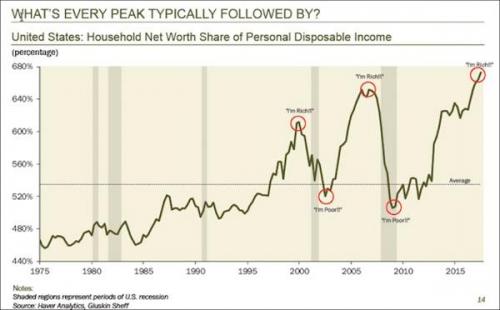 For the moment, the economy is being supported by asset price inflation. Last year, the roaring stock market and rising home prices pushed Household Net Worth up by $7.2 trillion to $99 trillion, an all-time high.  That 8% jump in Net Worth created a strong wealth effect that funded consumption and drove economic growth.

Now, however, with the Fed hiking the Federal Funds Rate and destroying Money through Quantitative Tightening, the stock market rally has begun to sputter.  If asset prices fall – or even stop rising – the economy would quickly lose momentum. With credit growth already weak, the longer the Fed continues to tighten monetary policy, the more likely a recession becomes.

• Credit Growth (adjusted for inflation) was below the 2% “recession threshold” last year for the first time since 2013.

• And it looks likely to remain below 2% for the next three years.

• Normally, such low credit growth would push the US into recession.

• For the moment, however, the economy appears to be supported by asset price inflation, which has fueled consumption and economic growth.

• If asset prices fall – or even stop rising – the economy could easily fall into recession.

• The longer the Fed continues to tighten Monetary Policy, the more likely that scenario becomes.”

The only other source of growth is asset price inflation and this is also at new extreme highs. Arguably this is closely linked to the federal debt explosion. However, one has to wonder whether this has any further sustainable gains from these levels or whether it represents an additional weakness in the next downturn.

In conclusion, investors need to understand the extent to which markets and the economy have become dependent on what the IMF clearly already considers as an out of control fiscal policy. Investors should also consider the lack of other engines of growth, and the scale of the risks should mean reversion occur.

In the short term the recent fiscal deficit explosion could still produce another sugar high for markets and the economy. However, from a long-term perspective the markets must be considered as highly fragile and dangerous given the historically extreme levels and unsustainability of its remaining source of growth.

Passive investors who imagine that this will somehow all work itself out without any damage to their financial situation could be taking the biggest gamble of their lives, when just a few risk management adjustments could make all the difference.