“Americans’ confidence in most major U.S. institutions remains below the historical average for each one,” a Gallup spokesman said in a news release. All in all, it’s a picture of a nation discouraged about its present and worried about its future, and highly doubtful that its institutions can pull America out of its trough.

On Gallup’s measures confidence in institutions has fallen to the lowest level since the data has been compiled.

Declining confidence stems from the perspective that there is a widening gap in perceptions between what an institution states as it’s purpose and how people experience an institution’s influence, including the extent to which it is achieving it’s stated goals.

This widening gap increasingly applies to the most central of financial institutions, the Federal Reserve. Compounding the Fed’s tragic forecasting record over the weakest “recovery” since the 1930s depression, increasingly there is a cacophony of statements from Fed officials that seem ever more convoluted, and even contradictory. Last week’s FOMC meeting is a case in point which is worth reviewing. 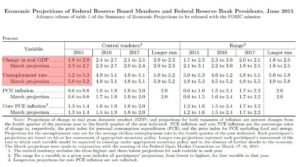 2) The 2015 inflation forecast remains below the longer run central tendency and is also sequentially below 2014. It is not forecast to reach its stated objective until 2017!

3) The most optimism in the report was on the labor market. However, even here Yellen stated “.. it seems likely that some cyclical weakness in the labor market remains“. As this seems to many the most positive factor in the economy it is worth examining this further.

How far is the labor market from becoming a concern as regards the fed’s objectives?

Average Hourly Earning have picked up just slightly to 2.3%, whereas back in 2007 they were above 4%! Also on closer inspection “there are both straightforward and misleading reasons for increasing AHE growth”. Overall flat looks like a better description.

Furthermore, as the US is currently in a productivity recession, any increase in work is having a decreasing impact on output. Therefore, the transmission mechanism is currently very weak.

4) There is really nothing here to suggest that there is any case for a near term interest rate rise, and certainly there is nothing in Yellen’s statement last week that necessarily contradicts that view.

” .. we continue to anticipate that it will be appropriate to raise the target range for the federal funds rate when the Committee has seen further improvement in the labor market and is reasonably confident that inflation will move back to its 2 percent objective over the medium term.”

However, a few days later the Fed releases statements with very different viewpoints. Apparently, 3 members believe in rate rises very soon, but without fully explaining this in the context of the recent data and forecasts relative to the stated objectives.

The next day MarketNews the reports “the FOMC majority is not prepared to wait indefinitely for market participants to be fully on board“.

Given the weakness of the case for a near term rate rise these seem puzzling statements without further clarification, they also show how focused the Fed has now become on market reaction, as confirmed additionally by numerous statements from NY Fed President Dudley.

There is nothing stopping the Fed from raising rates if it chooses to and is confident it is the correct decision. So why is it so concerned by the market’s reaction? Zerohedge comes to a popular conclusion.

“Needless to say, for now the Fed has been all talk and no hike, and any claims it won’t be “cowed” by markets are nothing more than a sad joke and proof of just how cornered the Fed is by the very asset bubble it itself has blown.”

Now we are getting closer to understanding the Fed’s behavior and perhaps better insight into it’s institutional constraints.

The header chart describes the Fed’s predicament. As the Fed ignores debt in its economic models it is likely that it was ignoring the exponential debt expansion underpinning growth prior to 2008. As we can see from the heading chart, and as described by the few economists who correctly predicted the 2008 market implosion, just a fractional drop in debt nearly destroyed the economy.

The modest recovery since 2008 has “coincided” with a modest return of debt growth. If debt saturation leading to debt deflation is the problem, though, the Fed has the wrong long term strategy. Solving a debt problem with more debt does not make any sense.

Steve Keen is one of the economists that correctly predicted the 2008 implosion, and explains this and much else in a recent video posting.

How can the Fed not change its models and policy to factor in the obvious influence of debt on the economy, particularly in the light of the 2008 experience? Surely the Fed must understand all too well that excessive debt makes the economy and markets critically fragile and has correlated negatively with growth in the long term.

The answer is remarkably obvious and straightforward. Implicitly the Fed has a rigid and unchangeable institutional constraint. The Fed was created by and for the banks (https://chrisbelchamber.com/essential-clarity-on-the-federal-reserve/). The banks make money from debt. Therefore too much debt can never be considered a policy problem by the Fed.

Now we can make better sense of the Fed’s policy and behavior.

If the real reason that the “recovery” has been the weakest since the 1930’s depression is that debt levels are too high, as seems increasingly obvious, then it will not be addressed.  Unfortunately, this viewpoint is taboo in banking circles. So rather than addressing this issue it is still being compounded.

Once the debt issue is blindly ignored as a policy problem, debt is actually still regarded as part of the growth solution. However, policy makers remain astonished that growth is still so weak 6 years on from the 2008 collapse. Their models still say growth should be much stronger and they are still wrong.

Unable to reconcile the failure of their economic models, the central banks have branched out into a new economic experiment with markets. The new idea is that as “expectations” and wealth are boosted by higher markets, so markets need to be incorporated in their growth policy. According to the theory, just as higher markets are “good” policy, lower markets are “bad” policy as with ever higher debt, falling markets could once again threaten growth as was experienced in 2008.

Hence central banks have become overwhelmingly involved in markets, which it is hoped can solve their growth problem. So much for markets reflecting the economy. Apparently, in the new theory, the relationship can be reversed so that the economy reflects engineered markets!

Now it is possible to understand why central bankers have become so sensitive to markets. Engineering and reacting to “markets” has apparently become a policy necessity. As a consequence “markets” have become an experimental central bank mind game. What fundamentals or signals they reflect any more is very uncertain. However, they are all clearly higher than they would otherwise be were it not for this turn in policy orientation.

So we should conclude that the Gallup survey is well grounded in its growing concerns about institutions. At the same time and for similar reasons, investors are facing unique and even historic choices. I doubt we have ever seen before this combination of policy activism in markets, stalling US equity markets, emerging weakness of earnings and revenues, and record high valuations.

The US equity markets have moved broadly sideways, with little change over the last year as measured by the broadest index the NYSE Composite.

There are very few analysts that can surpass John Hussman for his rigor in researching market valuation and policy theory. In his latest article he calls the market condition “historic”. 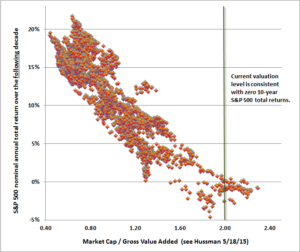 “The financial markets are establishing an extreme that we expect investors will remember for the remainder of history, joining other memorable peers that include 1906, 1929, 1937, 1966, 1972, 2000 and 2007. The failure to recognize this moment as historic is largely because investors have been urged to believe things that aren’t true, have never been true, and can be demonstrated to be untrue across a century of history.”

Investors could do worse than listen to Carl Icahn, who recently clearly expressed his investment view on CNBC.

“he crushed the two main memes of CNBC’s raison d’etre – buy stocks, because where else are you going to put your money – “what’s better – making 2% or losing 30% as people did in 2008…right now it’s an extremely dangerous time;” and the next leg of this bull market will come from an improving real economy – “the economy is not picking up, it is artificial due to low interest rates.” The market has way over-estmated how long this will last, Icahn concludes, “keep your powder dry – why do have to own anything risky? It’s just nonsensical.””