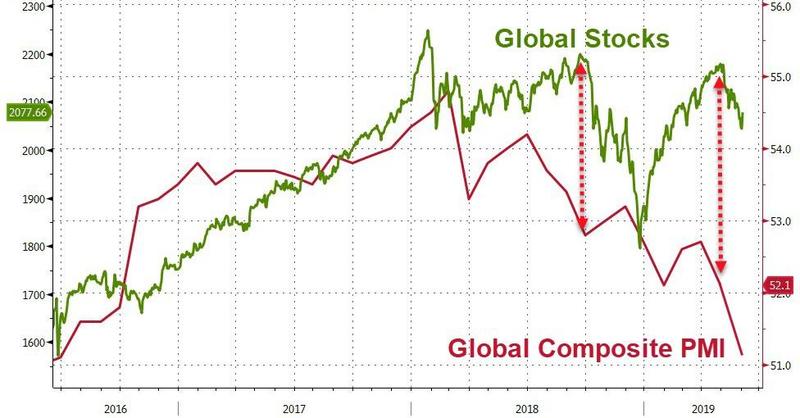 The disconnect between global data and stocks has never been wider. I believe there is a simple explanation. In my opinion record amounts of dystopian interventions, both in the economy and markets, are becoming increasingly ineffective and possibly even counterproductive.

Rather than change strategy, policy makers seem to be doing more of what isn’t working.

The chart above suggests that intervention is more effective at holding up stocks, than the economy, and now the spread has never been wider.

A similar phenomenon is visible in the corporate bond markets. The chart below shows that even though corporate bond debt has gone to record levels relative to GDP. Corporate bond spreads have barely widened at all so far. 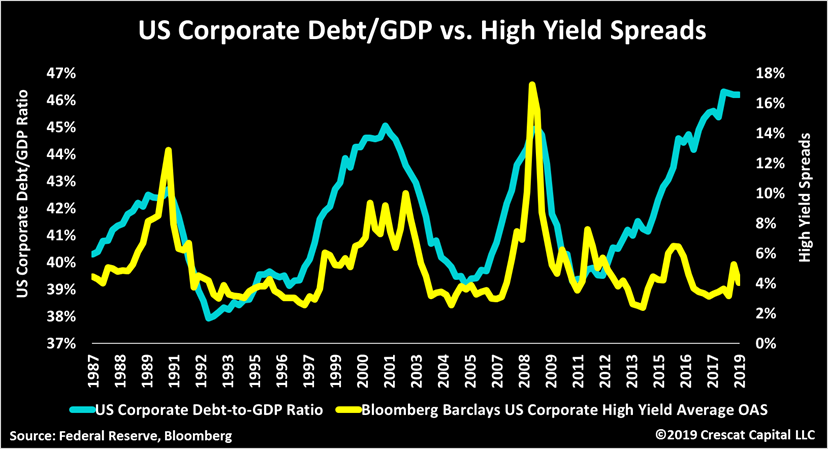 The US equity market is the standout among global equity markets. The long term valuation in terms of median price to revenue of the S&P 500 stands over 60% above the acknowledged bubble highs of both 2000 and 2007. 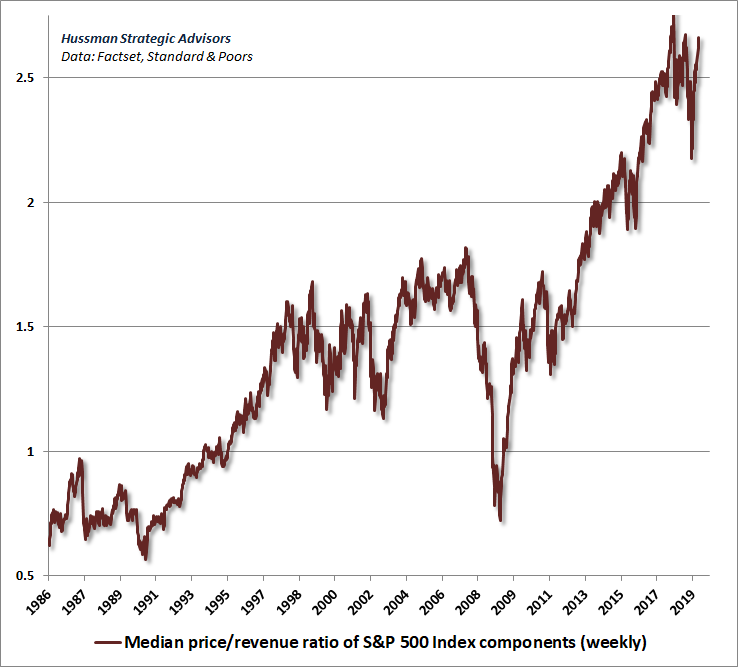 There are usually good reasons why extraordinary phenomena exists so it is worth being clear how we got here. The dystopian interventions that have overwhelmed market pricing as never before are in my opinion:

2. Buybacks, in the US in particular.

3. White House engagement. Never before has the US accelerated its budget deficit when already in a recovery.

All these points have been made in my previous articles, but the important point today is that now it seems increasingly possible to make the case that their economic effectiveness is more muted or is going into reverse, even as the ability to keep these interventions going is becoming challenging.

With markets at extreme levels this could hardly be a more important issue.

Long term track record matters in economic analysis, as in everything else, so it is well to consider analytical frameworks that have been highly accurate over the last decade and far beyond.

At the risk of oversimplifying, his conclusions expose the flaws in  the long term direction of policy.

Far beyond just plausible theories Hunt provides multi-decade evidence that the debt explosion has worked heavily against economic effectiveness in the long term with the following consequences:

1. Lower Growth;
2. Lower Inflation;
3. Decreasing impact from the Fed’s interest rate policy changes; and
4. Debt has crowded out private sector capital to the point that interest rates choke the economy at ever lower levels.

As the market has begun to discount that the Fed will have to cut interest rates this year, it is not clear that even cutting to zero will do the trick. After all, it hasn’t worked in either Europe or Japan.

I am a believer in Bayesian Inference, which means that outcomes have probabilities, and every day those probabilities change. I avoid the notion of setting forecasts rigidly and prefer being constantly adaptive to changing probabilities.

However, it is surely not too hard to imagine with some probability that today’s disconnect between market and economic conditions will mean revert at some point. This is especially the case if policy does not have much chance of an effective and successful endgame.

If we look at the market charts above, we can quickly see the scale of market moves that are possible in this endgame, the risks/opportunities on this view, are clearly substantial in the long term.

In the short term, however, interventions are operating diametrically opposite to mean reversion. This is the challenge and also the reason why markets have become far more volatile even though they have not been able to move very far over the last 18 months.

The more US equities fall,the more likely it becomes for support interventions. When interventions are taking place they quickly overwhelm normal market flow to the point that economic data flow doesn’t matter. If it did intervention would not work!

In this world you get the charts we see above. Normal historical relationships become broken or reach extremes never before seen.

Two strategies in One

To be effective in the short term, it becomes imperative to understand and react to interventions and data and understand and manage the oppositional relationship, and how that impacts markets.

To be effective in the long term it becomes imperative to understand that at some point mean reversion is likely, and be ready for the risk/opportunity that goes with that.

I believe this is a challenging, extreme, and unprecedented investment predicament, but also an opportunity.

Investors will need to be very clear about their strategies. That starts with getting straight about the most important factors in investing and their priority.

The approach that I believe is most consistently used by the most successful investors is to prioritize and focus on the 3 main objectives for investing:

In fact, you really need to focus on the first 2 alone and number 3 takes care of itself in the best possible way. Always prioritize risk first. Then it is likely that you will have an effective and durable framework.

Investors need to rigorously analyze strategies for both short term, and long term outcomes. The most difficult is the short term as it can go both ways quickly in many asset classes. However, I believe it is possible to find an effective overall combination of strategies, that could work well with the right focus and execution.