Step 2 of 7: How psychology and technology can improve your investing

Step 1 focused mainly on describing the broad challenge of increasing the probability of long term success in accumulating wealth.

The two main highlights were that, firstly, it requires the humility to appreciate that a major obstacle lies within ourselves.

Secondly, it is important to stress that this is a complex issue. Oversimplification or rushing to judgement can be dangerous.

“As much as we want to “keep it simple, stupid” … It is precisely the simplification of issues that are actually very complex, which can be dangerous.”  Nassim Taleb

Before we get into the details of investment decision making it is important to be clear about the obstacles within ourselves. This awareness will help with how to make the best choices of what helps or hinders the decision process.

Much of the writing below comes from Richard Smith, who has gone into great detail on this subject and committed his career to understanding and finding solutions to this issue. Smith’s writing is in italics and quotation marks, with links to the source articles.

The Myth Of Rational Economic Man

The groundbreaking work of Kahneman and Tversky in the 1970s, demonstrating the countless ways in which human behavior is deeply irrational, exploded the myth of “Rational Economic Man” forever. However, it is still not widely understood and remains an issue for many investors today.

“Investors cannot be rational on their own unless they recognize their natural built-in biases and flaws and take steps to correct them with behavior modification. Some investors have figured out how to do this on their own … but the vast majority have not.”

“Daniel Kahneman won a Nobel Prize for his work proving that human beings are irrational in certain predictable ways.

Kahneman’s work applies to you, me and everyone because, once again, these are not personality flaws we are talking about — they are built into the blueprint of the brain.

Your perception (and everyone’s) is flawed in ways you cannot easily control. As an investor, you have certain biases built right into your brain that can hurt your performance in markets, and possibly even destroy your performance completely and block you from becoming a successful investor.

That’s the bad news. The good news is these flaws and biases can be corrected.” 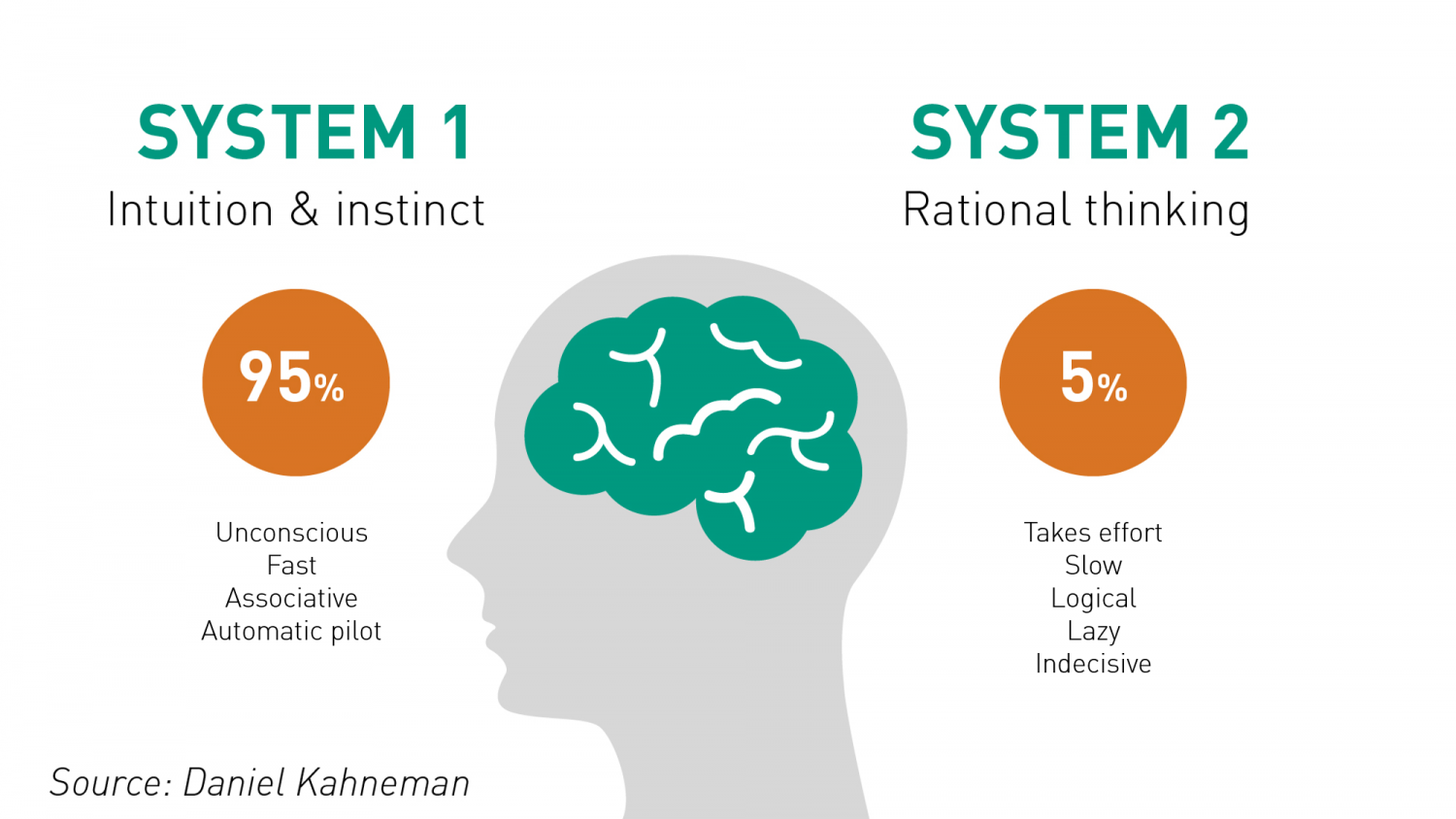 You don’t literally have two brains. It’s not like there’s a spare somewhere. But the human brain has two different “systems,” which Daniel Kahneman calls System 1 and System 2.”

“The two systems are so different from each other — and have such radically different jobs — that they’re the functional equivalent of having two different brains.

To put it another way, System 1 and System 2 are like two different operating systems that run on the same computer.

The athlete (System 1) is fast, responsive and intuitive. It decides quickly and moves quickly. It’s primed to make quick judgments, and act quickly on them.

System 1 is all about survival in the face of danger. If you’re hiking in a forest and come across a bear, System 1 is what floods your body with adrenaline … sends a surge of power to your muscles … and has you running at top speed or climbing a tree before your rational mind fully registers what’s happening.

System 2 is more like a chess player. It works slowly and deliberately and is capable of abstract thought.

System 2 moves like a tortoise in comparison to System 1. But System 2 is better at making complex judgments or solving hard problems.

Basically, when you come across a problem that requires thinking things through (a situation where help from a chess player would be more valuable than help from an athlete), you’re using System 2.

Most people use System 2 a far smaller percentage of the time than they use System 1. That’s because System 2 is “cognitively expensive.” It takes a lot of energy to run it.

The challenge for most investors is that, when it comes to investing, the snap judgments of System 1 are all too often wrong or incomplete.

Important investment decisions are usually better served by System 2 — that slow, deliberate, and thorough process that is cognitively expensive. (The chess player versus the athlete again.)

Another problem is that System 1 is directly connected to the emotional center of the brain. This is a feature, not a bug, because emotion gets the body moving as a form of survival response.

You don’t want the emotional triggers of System 1 messing with investment decisions any more than you’d want a professional athlete giving you tax advice. It’s the wrong system for the job!

Developing a clear set of rules, which exist outside your brain, for System 1 to rely on.
Reducing the cognitive expense of System 2 by using software.
Remember that System 1 uses heuristics, or rules of thumb, to make fast judgments that are often emotionally charged. This is a survival feature, in the same manner an athlete uses quick reflexes and fast judgments on a playing field.

But in complicated environments, it’s better to have an outside set of rules — a checklist, if you will — that the brain learns to rely on instead of System 1 judgments.

Atul Gawande — the renowned surgeon now working to transform the healthcare industry the backing of Jeff Bezos, Warren Buffett, and Jamie Dimon — even wrote a book on the value of checklists called “The Checklist Manifesto.””