Or can you see a trend in aggregate hours worked over the last 2 years?

“A Force For Lower Interest Rates. “Dr. Lacy Hunt. Why the Federal Reserve and Bond Bears have been completely wrong.

“Central bankers desperately want the public to believe that they know what they are doing. Nothing could be further from the truth.” Stephen Roach

The so called “Data Dependent” Federal Reserve has consistently attempted, over the last two years, to hold the narrative that the economy is recovery sufficiently well to start raising interest rates. They still are!

So the header chart shows the undisputed data. Can you see a trend? How could anyone conclude anything other than this two year narrative being “Literally a Lie”? Keith McCullough explains:

This being the case economic policy continues to be set by a Federal Reserve Board that continues to hold to the exact opposite narrative. This narrative could not be more incomprehensible. Here is Janet Yellen’s favorite composite labor market indicator.  Can you see the 5 year trend from the data on the Federal Reserve’s own data base? 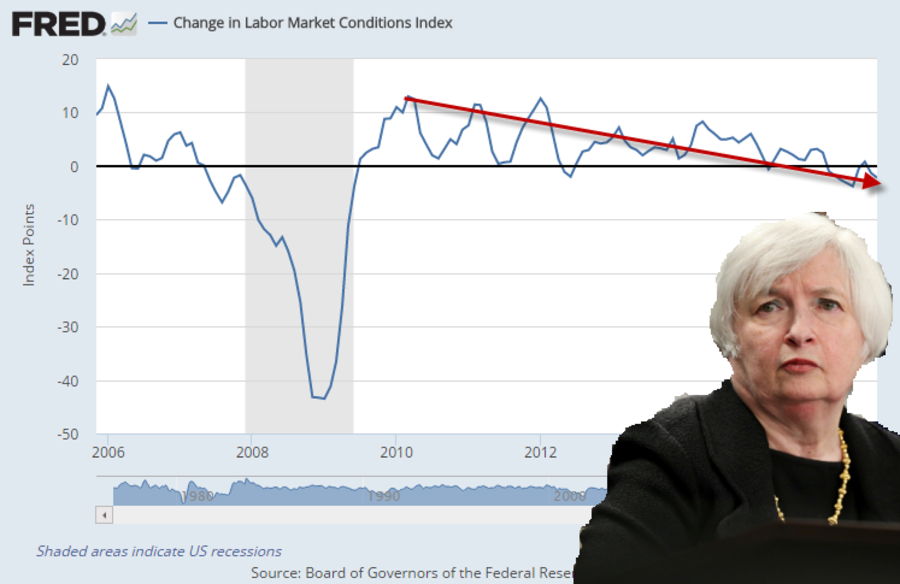 Or can you see a trend in aggregate hours worked over the last 2 years? 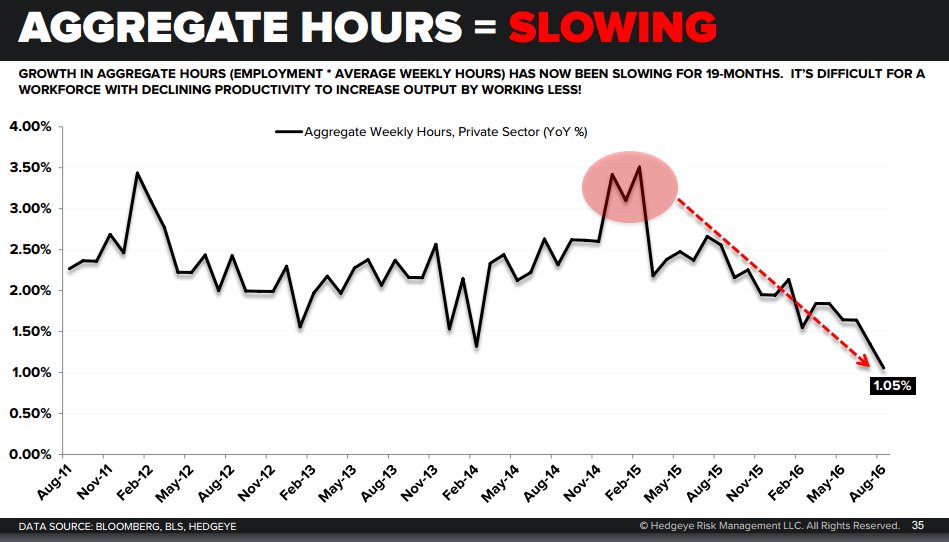 “A Force For Lower Interest Rates. “Dr. Lacy Hunt. Why the Federal Reserve and Bond Bears have been completely wrong.

Dr. Lacy Hunt shows that not only has nominal GDP now fallen to the astonishingly low level of 2.4% (1.2% real) but money velocity has collapsed to WW II levels. He has been consistently right in recent years in his forecast, so don’t discount his latest viewpoint.

2. Due to debt repayment obligations, economies are subject to structural downturns without the cyclical excesses of rising interest rates and inflation.

3. Deterioration in productivity is not inflationary but just another symptom of the debt overhang.

4. Traditional monetary and fiscal policy actions are asymmetric. They can restrain but not stimulate growth. Fiscal policy options exist provided they do not increase aggregate indebtedness.

6. Treasury bond yields fall to extremely low levels and remain depressed for an extended period since the Fisher equation (1867-1947) states that the long risk-free yield is equal to the real yield plus expected inflation.

7. When multiple major economies are simultaneously over-indebted, the world lacks an engine of growth.

8. Indebtedness problems cannot be solved with more debt and if that is the course, the first seven symptoms will not only persist, they will worsen. Historically, debt overhangs in major economies have only been cured by a significant multi-year rise in saving of which different ways can achieve this result.

9. During periods of prolonged over-indebtedness, demographics may deteriorate reinforcing the negative influences of the first eight characteristics.”

“Central bankers desperately want the public to believe that they know what they are doing. Nothing could be further from the truth.” Stephen Roach

“What is particularly disconcerting is that central bankers remain largely in denial in the face of this painful reality check. As the BOJ’s latest actions indicate, the penchant for financial engineering remains unabated. And as the Fed has shown once again, the ever-elusive normalization of policy interest rates continues to be put off for yet another day. Having depleted their traditional arsenal long ago, central bankers remain myopically focused on devising new tools, rather than owning up to the destructive role their old tools played in sparking the crisis.”

If the S&P 500 can hold above key price support levels, it can rally once more. But one nagging concern lies within a longer-term time frame.  On the “monthly” bar chart, a negative RSI divergence has developed. Since this is a monthly chart, the S&P 500 bearish divergence could go on for a while yet. However, it is worth noting that Stochastics are overbought and potentially rolling over.