“We’re all minions now of the stock market”

QE has no impact on Nominal GDP growth

“When the profits from financializing collateral and leveraging those bets to the hilt far exceed generating wealth by creating products and services, the economy is soon hollowed out as the perverse incentives of financialization start driving every business and political decision and strategy.”

The Federal Reserve is now sailing into a crisis of its own creation. It’s policies have increasingly devolved into just propping up the stock market without any coherent rationale for doing so. At the same time, it has now reached the point where seemingly every measure it is taking has either near zero impact or has become a negative for the economic outlook.

QE has no impact on Nominal GDP growth

It is already clear that QE in both Europe 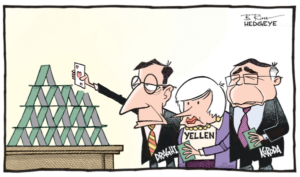 and Japan QE have already failed to boost growth even with substantial currency devaluations. Within a year of the latest European QE program, ECB president Draghi has been forced to promise even more QE in the latest meeting. Then, in a recent note we showed that Japan is now falling into its 4th recession in 5 years.

John Hussman has produced overwhelming evidence that QE also does not generate economic growth in the US. While QE does boost the monetary base, it also leads to an offsetting decline in monetary velocity. The chart below shows that this relationship is close to irrefutable!

Fed Day Chart Fest 8/8: The only effect of QE is to reduce monet velocity, with no effect on real GDP or inflation. pic.twitter.com/BvItGnAx0X

Fed Day Chart Fest 7/8: w/o IOER, interest rates would be zero even if Fed balance sheet was $1.4 trillion smaller. pic.twitter.com/s7jxv9j5ed

So what would be the point of further QE or anymore surplus liquidity? Greater scope for asset price distortions?

“There is the explanation of the paradox of surging C&I (and overall) loan growth, which took place even as overall economic growth and capital spending never followed. The reason? All that secured C&I debt was going not toward growth capital spending, or even maintenance/replacement CapEx, but simply into financial engineering: M&A and debt refis, the first to cash out the CEO 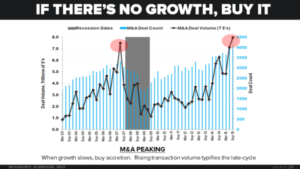 of the acquiring or target company (with the generous blessings of the lender bank), the second to lower the cost of debt so more cash could be retained however not to grow the business but simply to fund the equity portion of said M&A.

Meanwhile the loan demand associated with actual economic growth: a paltry 6% of the total!”

Meanwhile, the Fed just continues to enable (enforce?) further stock market gains. This is apparently their “policy solution” for all economic threats. Why? No coherent rationale, as the BIS has explained and was covered in a previous note.

This “policy solution” has continued to accelerate the stock market distortion. So much so that now with declining earnings and revenue, rising stock market prices are creating further falls in the long term expected return from stocks to new lows.

John Hussman has identified the historically most accurate estimate of the expected return of the S&P 500. Even with a relatively flat performance this year the expected return has fallen even further, to around just 1% annually for the next 12 years!

The relentless bubble being generated by the fed is only creating long term instability and in addition a massive misallocation of capital.

The Fed’s announcement this week was interpreted as bringing back, yet again, the talk of an interest rate rise. The chart below shows the immediate rally in the US Dollar exchange rate at the time of the announcement. With inflation already near zero a higher exchange rate is unlikely to help. Commodities immediately fell,  in line with all the other “deflation” trades. Furthermore, no doubt this will also put further pressure on corporate revenues and earnings which have already turned down into a recession.

“Somewhat less enthusiastic, however, are the corporate executives who have seen their firms’ sales and earnings squeezed by a strong dollar of late. If rising rates make the dollar even stronger — as theory says they should — then presumably that makes corporate earnings even weaker. The media has been wrestling with various aspects of the dollar/corporate earnings/Fed policy connection for a while, and a consensus seems to be forming that there’s a conflict between aims and results in current monetary policy that another couple of months probably won’t resolve.”

The fed has now tied its credibility seemingly solely to the stock market. However, what possible benefit remains from any of its policies? Producing even more liquidity just to further boost an already historically expensive stock market, would just create even more capital misallocation and instability.  As discussed above all the other mechanisms are either ineffectual or counterproductive.

Nevertheless, the Fed refuses to change 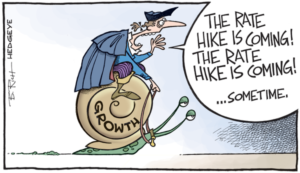 its tune as demonstrated once again in the FOMC statement on Wednesday.

The script for the last 7 years is that the fed can’t raise interest rates but must pretend that it will.

However, as shown above, pretending it will raise rates will have a deflationary impact which will make it even less likely it can actually raise rates. This is a Catch 22 situation.

We have finally reached the endgame for the Federal Reserve’s economic policy failure of the last 7 years.

Investors are confronted with 2 different scenarios. In the very short term it looks like the Fed is attempting a repeat of Q4 2014, which was one of the strongest two month stock market performances ever. The “Bullard” rally “rescued” the stock market from going negative YTD in mid October 2014.

If the Fed is successful again any investor that allocates away from the S&P 500 will be punished in terms of their Q4 quarterly performance.

However, now we know the script. The Fed is having to strain even more than ever with declining revenues, earnings, and economic growth. If Q4 is all that matters then you can take your chances. Just recognize that markets go up the escalator, but down the lift shaft. Just remember August.

This is a time when for investment advisors the long term fiduciary responsibility seems to be diametrically opposed to the current stock market obsession. While it is always important to take advantage of current conditions to maximize returns, the longer term risks are massive and asymmetrical.

In these conditions, my view is that the long term fiduciary responsibility is paramount. This means that allocation strategy should be focused mainly on the very limited long term opportunity relative to the risks, and make only minor risk controlled concessions to current extraordinary conditions.