Posted on September 24, 2015 by Chris Belchamber

Earned Income as a percent of GDP has declined for 45 years.

Debt, however, has risen exponentially for 45 years

Earned Income Capitalism was overwhelmed by the bank credit system

The “QE Infinity Paradox” has extended not resolved  the problem

Closer to a timeout on this extension

Earned Income as a percent of GDP has declined for 45 years.

The chart above shows that earned income as a share of GDP has declined consistently ever since 1970. What happened in 1970?

Debt, however, has risen exponentially for 45 years

45  years ago, the dollar was delinked from 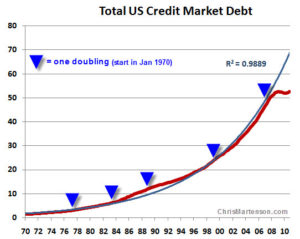 gold, which meant that debt creation became unconstrained. The banks suddenly had no limits on their privilege and incentive to create money through expanding their debt. As you can see from the chart to the right, this allowed debt to grow exponentially, as financialization exploded.

Earned Income Capitalism was overwhelmed by the bank credit system

If finance and leverage become a bigger part of the economy then something else has to give way. It is clear that earned income has declined, and this takes no account of the massive increase in debt burdens and other rising costs that reduces disposable income even more than earned income relative to GDP. This “growth” system has started to struggle ever since 2007.

The “QE Infinity Paradox” has extended not resolved  the problem

QE  and ZIRP have only perpetuated 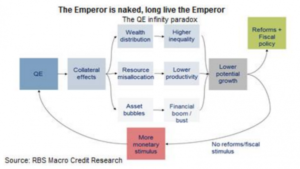 the problem by delaying an unwanted resolution. As a result economic policy has fallen into the “QE Infinity Paradox”.

Closer to a timeout on this extension

The situation has become so fragile that 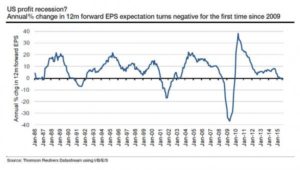 now very little growth can be generated even with central banks pulling out all the stops with endless zero interest rates and QE. They dare not raise rates as growth continues to disappoint and even decelerate in 2015, corporate earnings expectations are now in decline for the first time since 2009, and with so much leverage in the system there is the additional risk of setting off a debt implosion like 2008.

However, zero interest rates are no longer providing a boost to the economy as argued by the “bond king” Bill Gross.

So the central banks seem stuck at zero 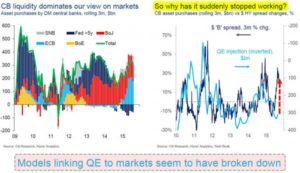 with no clear way out. Furthermore, asset purchases are having less impact on markets as the recent balance sheet expansion has failed to narrow the spread of high yield bonds to treasuries for the first time since QE was introduced.

Furthermore, there was no relief rally following the Fed announcement last week of no tightening in policy. Indeed the stock market fell after a very brief rally. Markets have realized that the central banks are now in a box with no clear way out. 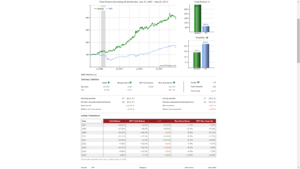 My Cycle Dynamic systems are reflecting uniquely few positive trends in 2015 across all asset classes.  The Asset Selector shows that for the first time since 2009 there have been no consistent positive trends, which is why the best performing hedge funds this year have mainly achieved these returns through trading short positions. This is a significant problem for most investors.

There is also another systemic problem haunting the global monetary system based on the US dollar as reserve currency. This is best known as Triffin’s Dilemma, and results from the problem that any reserve currency needs continued confidence but also a consistent deficit in order to provide capital to the rest of the world.  This paradox is ultimately unsustainable as there will always be too much or too few dollars for the world’s needs.

In the end there seems to be only two solutions to the global currency problem. Jim Rickards, as usual, provides great clarity on this subject. It seems to come down to a choice between gold or SDR’s.

“A new gold standard might be one way to solve the problem, but it would require a gold price of $10,000 per ounce in order to be nondeflationary. No central banker in the world wants that, because it limits their ability to print money and be a central economic planners.

Is there an alternative to gold? There is one other way out. That’s our old friend, the SDR. The brilliance of the SDR solution is that it solves Triffin’s dilemma.

Recall that the paradox is that the reserve currency issuer has to run trade deficits, but if you run deficits long enough, you go broke. But SDRs are issued by the IMF. The IMF is not a country and does not have a trade deficit. In theory, the IMF can print SDRs forever and never go broke. The SDRs just go round and round among the IMF members in  closed circuit.

Individuals won’t have SDRs. Only countries will have them in their reserves. These countries have no desire to break the new SDR system, because they’re all in it together. The US is no longer the boss. Instead, you have the “Five Families” consisting of China, Japan, the US, Europe, and Russia operating through the IMF.

The only losers are the citizens of the  IMF member countries – People like you and I – who will suffer local currency inflation. I’m preparing with gold and hard assets, but most people will be caught unaware, like the Greeks who lined up at empty ATMs last month.

This SDR system is so little understood that people won’t know where the inflation is coming from. Elected officials will blame the IMF, but the IMF is unaccountable. That’s the beauty of SDRs – Triffin’s dilemma is solved, debt problems are inflated away and no one is accountable. That’s the global elite plan in a nutshell.”

How well have central banks managed 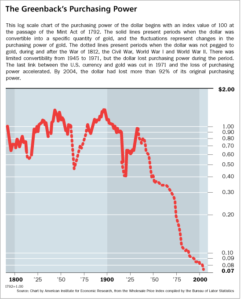 to preserve the value of the currency they promise to uphold? This is a record unblemished by success across history and culture. For example the record in the US is shown in the chart.

This point is widely misunderstood by those who blame “capitalism” as the key source of economic problems.

With so much confusion on this point there a significant risk that the SDR solution will be accepted. Hopefully enough people will understand the risks of handing over creation and management of money to a handful of academics. The overwhelming incentives that come with this system have led to a perfect record of long term instability and failure.

Perhaps, after all, the world should look again at the other reserve asset that is always held by the central banks themselves – Gold.

The real choice is between earned income capitalism, or a bank credit system based on the privilege of money creation and control.

Whatever the outcome the markets, policy and the economy have reached an almost unique moment of uncertainty. This is clearly a time for low levels of risk and waiting for better definition on new trends. Policy makers still appear to be managing deteriorating  economic and market conditions on a day-to-day basis, rather than addressing the deeply flawed architecture that has clearly reached a critical condition.