Posted on November 25, 2016 by Chris Belchamber

In this article, with highlights taken from the article as a preface, former British diplomat Alastair Crooke here attempts to list some of the difficulties Donald Trump will face in executing the economic measures he promised to take in his campaign. Crooke argues that, the financial crisis that never ended may be one of his biggest problems.

Just go to the bottom to read the full article, or here is a shorter version.

Highlights from the article:

Things are not what they were.

Can Trump then achieve growth and jobs through infrastructure expenditure? Or just a bigger debt burden?

Debt will rise. And there is seemingly already a buyers’ strike against U.S. government debt underway 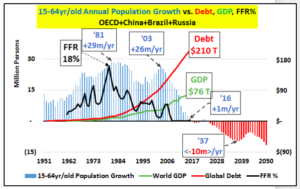 “Things are not what they were.”

“Things are not what they were.” Complexity “theory” tells us that trying to repeat what worked earlier – in very different conditions – will likely not work if repeated later. In the Clinton era, for example, 85 percent of the U.S. population growth derived from the working-age population. The headwind that Trump will face is that, over the next eight years, 80 percent of the population growth will comprise 65+ year olds. And 65+ year olds are not a good engine of economic growth. This is not an uniquely American problem; it is a global trend too.

“…with the appreciating dollar and rising interest rate environment, growth from emerging markets as a whole will falter, since emerging markets have effectively leveraged their economies to Chinese growth. It used to be the case that they were closely tied to U.S. growth, but it is now China which dominates the EMs’ trade flows [i.e. without China growth, the EMs languish]. The question is, can America reboot its growth whilst China and the EMs languish? It is another structural shift, whereas heretofore, it was vice versa: without U.S. growth, the EMs and China languished. Now it is the converse.”

Can Trump then achieve growth and jobs through infrastructure expenditure? Or is it just a bigger debt burden?

“Can Trump then achieve growth and jobs through infrastructure expenditure? Well, “growth” is an ambiguous, shape-shifting term. The first chart shows both sides of the equation … the annual GDP growth and the annual federal debt incurred, spent, and (thus counted as part of the growth) to achieve the purported growth.

The second chart shows the annual GDP minus the annual growth in federal debt to achieve that “GDP growth.” In other words, unlike in the earlier Reagan times, more recently, the debt is producing no growth – but … well … just more debt, mostly.

In fact, what the second chart is reflecting is the dilution – through money “printing” – of purchasing power: away from one entity (the American consumer), through the intermediation of the financial sector, to other entities (mostly financial entities, and to corporations buying back their own shares). This is debt deflation: the American consumer ends having less and less purchasing power (in the sense of residual discretionary income).”

“As Rickards has said, debt is the “devil” that can undo Trump’s whole schema: a “$1 trillion infrastructure refurbishment plan, along with his proposal to rebuild the military, will — at least in the short-term — significantly increase annual deficits. In fact, deficits are already soaring; the fiscal 2016 budget hole jumped to $587 billion, up from $438 in the prior year, for a huge 34% increase…in addition to this, Trump’s protectionist trade policies would implement either a 35% tariff on certain imports or would require these goods to be produced inside the United States, at much higher prices. For example, the increase in labor costs from goods made in China would be 190% when compared to the federally mandated minimum wage earner in the United States. Hence, inflation is on the way.”

Debt will rise. And there is seemingly already a buyers’ strike against U.S. government debt underway 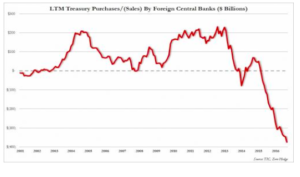 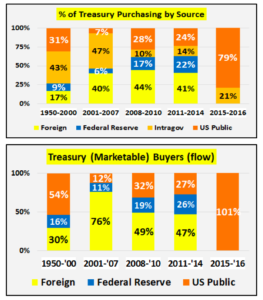 Debt will rise. And there is seemingly already a buyers’ strike against U.S. government debt underway: well over a third of a $1 trillion worth of Treasuries were disposed of, and sold in the year to Aug. 31 by foreign Central Banks. And who is buying it? (Below, the chart shows what this purchasing looks like, as a percentage of total debt issued by the Treasury). Well, foreign central banks have disappeared. (The Chinese have not bought a U.S. Treasury bond since 2011.)

The bottom line: (Michael Pento, Pento Report): “If interest rates continue to rise it won’t just be bond prices that will collapse. It will be every asset that has been priced off that so called ‘risk free rate of return’ offered by sovereign debt. The painful lesson will then be learned that having a virtual zero interest rate policy for the past 90 months wasn’t at all risk free. All of the asset prices negative interest rates have so massively distorted including; corporate debt, municipal bonds, REITs, CLOs, equities, commodities, luxury cars, art, all fixed income assets and their proxies, and everything in between, will fall concurrently along with the global economy.

Here is the link to the full article from the www.theautomaticearth.com web site.