“One Of The Great Blunders Of Fed History” Jim Rickards 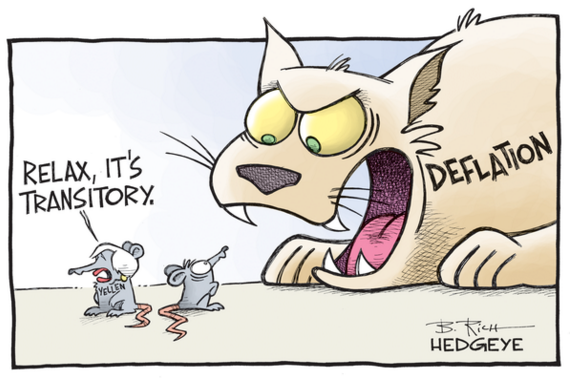 This isn’t transitory its cyclical

As for the Fed – three wrongs don’t make a right

This isn’t transitory its cyclical

“After listening to Janet Yellen yesterday, I finally realized that the difference between our economic forecasts boils down to the difference in one word. What we call cyclical, she calls “transitory.”

To give her some air time on this, the Miriam Webster Dictionary defines “transitory” as “ephemeral, momentary, fugitive, fleeting, evanescent, meaning only lasting or staying a short time.””

On the same day of the rate rise announcement the industrial production data showed the weakest reading since 2009.This seems to go far beyond the description of “transitory”, to something far more substantial. A major cycle move could be a better description, which so far shows no sign of changing direction, rather it seems to be accelerating.

Jim Rickards had a simple comment about the Fed’s decision to raise rates this week  – “this will be one of the greatest blunders in Fed history.”

However, to the Fed mindset, their models are built on the notion of stable equilibrium. Apparently, any moves away from this “norm” need their special attention so that by using their control mechanisms, great wisdom and theories, they can somehow maintain this happy equilibrium zone.

In effect cycles don’t exist to the Fed, which is why no central bank has ever a priori forecast a recession. Any deviations from their model concept are apparently “Transitory”, even if they are the worst for 6 years in the case of industrial production, or 7 years in the case of zero interest rates.

The Fed are in such a hurry to create the impression of “normal” that it appears they have now decided to ignore the data which continues to show no sign of any move back to “normal”. They even end up saying things like this. 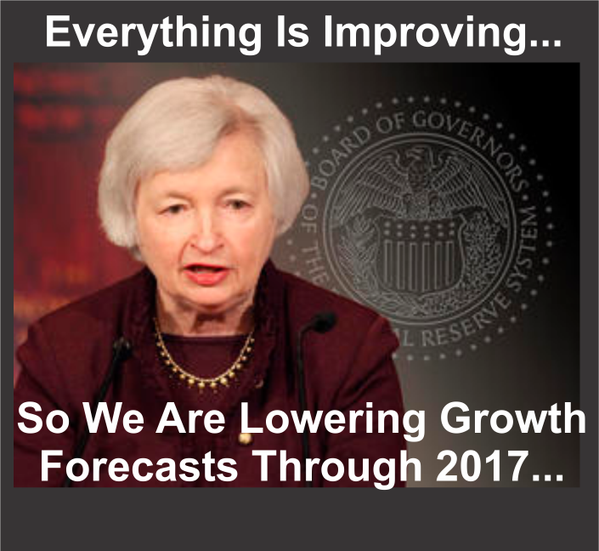 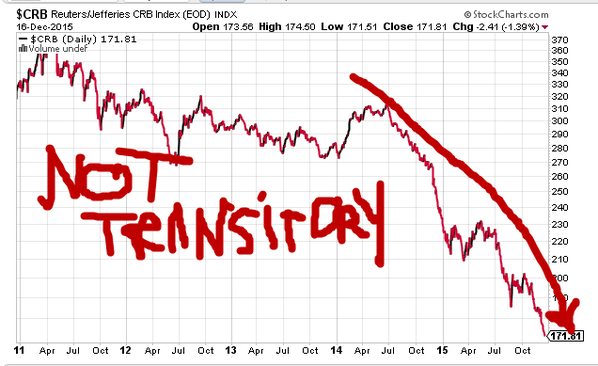 Meanwhile, in the chart below we see the whole commodities asset class, as measured by the CRB index, has fallen by more than 50% over a period of more than 4 years, hardly “transitory”.

Data like this is so widespread that in the link below there are another 10 data series that express the same sense that this was an extremely strange time to decide to tighten policy. Indeed a good case can be made that this was the worst time in 7 years to raise rates!

One of the most accurate market indicators is the Treasury yield curve. The chart below shows that the pink line is breaking to new post 2008 lows. hardly a vote of confidence in the economic outlook. 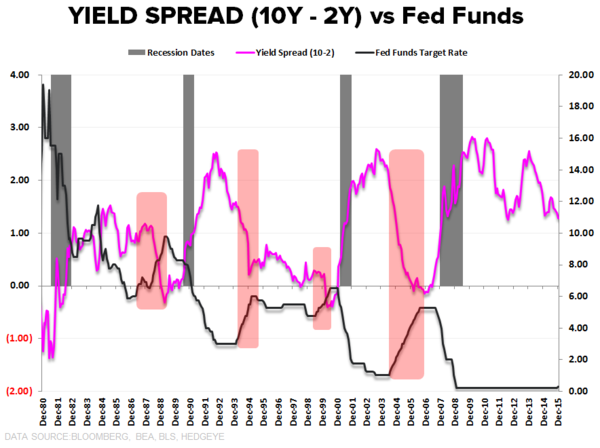 Already many successful cycle analysts are now forecasting a recession some time next year.

By the end of the week the market reacted correspondingly – Treasuries are higher while real assets fell across the board. A logical response to the Fed’s deflationary action. Overall the central bank bubble is struggling more and more.

Louise Yamada explains that the longer term trends in US stocks may be turning.

Another sign is that stock market performance this year has been remarkably narrow. It has been confined to just a few big cap stocks. Most investors seem unaware that the average listed US stock is already down 19% from its high. Very close to being in a bear market in those terms! 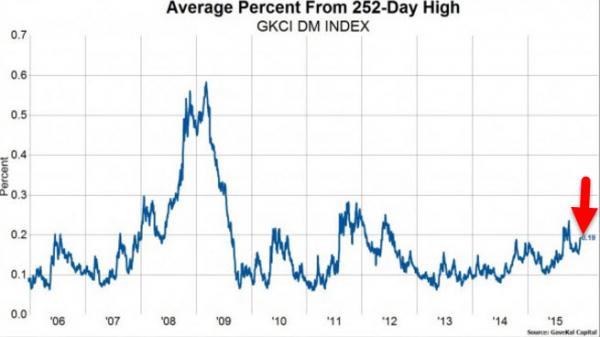 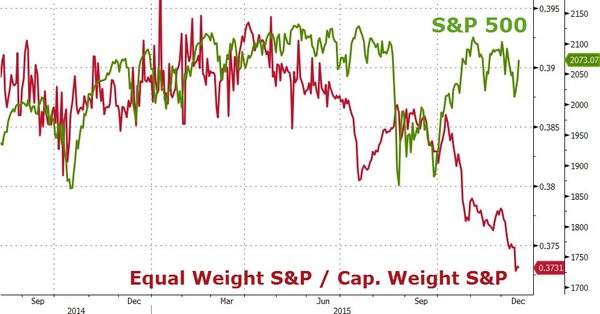 The big caps have outperformed as they have been able to be the most aggressive with their balance sheet. US net corporate debt has exploded relative to income in the maximum distortion years since 2013.

Most of this debt has simply gone into buying back stock. The chart below shows the incredible degree to which debt finance has driven the current stock market bubble. 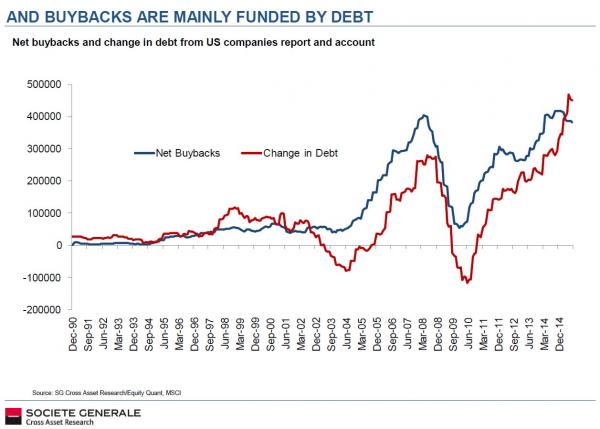 All the signs are that the bubble has become very advanced by a multitude of measures. In addition the upside momentum has weakened dramatically.  Furthermore, the central bank has started removing stimulus. It is long past time to be chasing short term performance.

Chasing short term performance has generally been the ruin of most investors over time and this is particularly the case in a huge stock market bubble. The trends can seem relentless and long standing, and investors come to believe that they constitute almost a sure thing and simple to achieve. The only way to avoid this trap is to understand the level of risk when the bubble ends and overwhelming signs of an end to the bubble.

When these conditions have been met, which I now believe to be the case, it is important to focus on cycle strategy rather than short term performance. A short term performance approach simply means an investor will be over exposed when a violent setback begins, and will most likely lose all and more of any remaining short term gains.

As for the Fed – three wrongs don’t make a right

Most likely the Fed has blundered badly in its decision this week. As has previously been shown, its economic policies have failed as should be obvious to everyone by now. Its models, and therefore forecasts, have been consistently overoptimistic for 6 years and this obvious problem should have been addressed.

Having enabled the biggest debt expansion in history, the Fed has decided to increase the cost of carrying that debt into a clear deflationary slowdown. As Jim Rickards said “one of the greatest blunders in Fed history.”