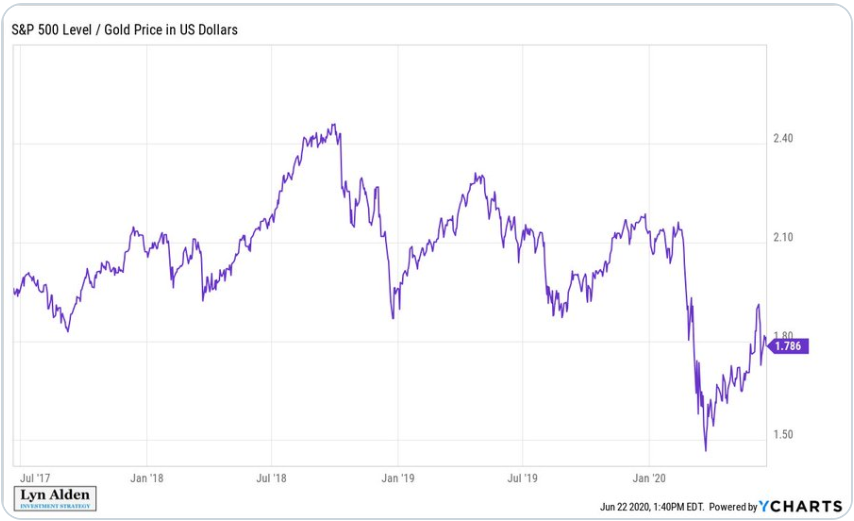 The chart above shows that the S&P 500, priced in gold, peaked in 2018, and is now in a downtrend. This correlates well with real GDP which has followed the same pattern.

As shown below, the S&P 500 index has failed to make a new high against gold since 2005! That fits in with the ex debt depression chart in a recent note.

Are you looking at allocation and performance in the right way?

“3 levels of Crisis” was the title of my review 6 months ago, on January 2, 2020, even before I had heard anything about a virus.

Economic crisis was a pre-existing condition.

All that has happened since then, has simply confirmed my opinion that the current economic policy framework is only capable of ever more extreme rescues from its own failing policies, setting up an even greater crisis down the road.

This has become a well established pattern at this stage. However, the deeper we get into this “MMT Dystopia”, the more complicated the dysfunction gets. Therefore, I believe the job of investing for high expected returns in the short term and positioning for the policy reset endgame becomes increasingly challenging.

It is important to look at markets, through all the unprecedented extremes, in a way that they still make sense, now and into the future.

Increasingly it has become more useful to use gold rather than US dollars as the reference for pricing assets.

Fiat money is now in trouble

Persistently exploding debt requires ever lower interest rates and easy money conditions to make the debt interest burden manageable. This has led to the lowest real yields on US dollars in decades, as shown in the 3 levels of crisis link above. In my opinion this makes US dollars an increasingly weaker base line asset for comparison.

Looking forward, debt of all kinds continues to escalate to the point where it is becoming increasingly hard to see how the current policy framework could coexist with higher interest rates. With dollars, and all fiat currencies, now being provided on call in astonishing amounts, fiat currencies are becoming an increasingly questionable store of value or even a preferred benchmark.

Let’s not forget the long term track record of fiat currencies. All currencies die or devalue.

Investors have remained in thrall to the “US equity bull market”, but it has already disappeared when compared to gold. As previously stated I believe gold is an essential component in any portfolio strategy. 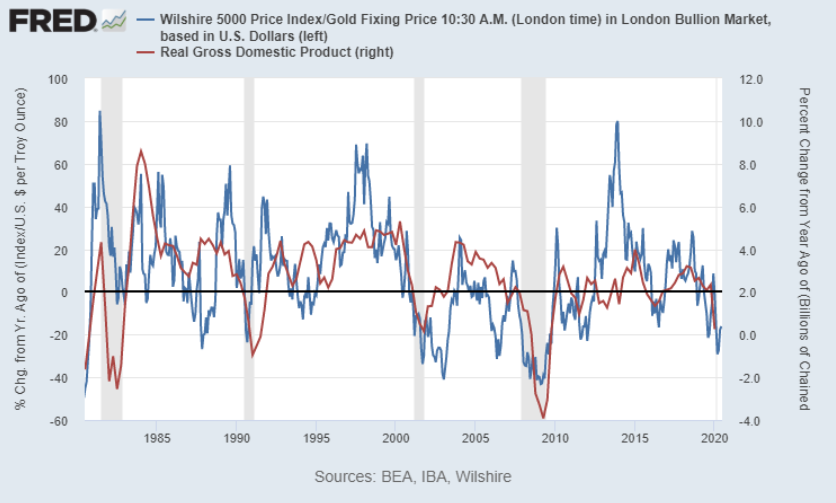 Once SPY/GLD is adopted the narrative becomes different but clearer.

Cycles are everlasting, and continue to have predictive value. Central banks have never been able to overwhelm them, however hard they may try to.

My July 2019 blog, highlighted the growing desperation of all central banks. In their own words in the BIS report:

“This gives rise to a really important question. Is targeting the S&P 500 really good policy or are policy makers just getting desperate?
In my opinion, the BIS report just released suggests a hint of desperation.
“Time to ignite all engines, BIS says in its Annual Economic Report”
https://www.bis.org/press/p190630.htm”

Again, in 2019 this was also a lower high in terms of SPY/GLD, in line with ongoing clearly weak economic conditions.

My January 2020 blog, highlighted that central banks were now in a state of what I believed to be a full crisis.

“ I hope I can bring some clarity and understanding to the latest events by breaking this down into 3 separate but interrelated perspectives:
1. The internal central bank crisis
2. The long term crisis this creates outside the central banks
3. The investment prospective return crisis”

The link above also discusses that even with all the extraordinary central banks initiatives of the previous decade, the global economy entered 2020 with declining year on year world trade volume and industrial production, for the first time since 2009.  I firmly believe the economic policy framework was already in deep trouble coming into 2020, as was well reflected by the ongoing lower highs in SPY/GLD. 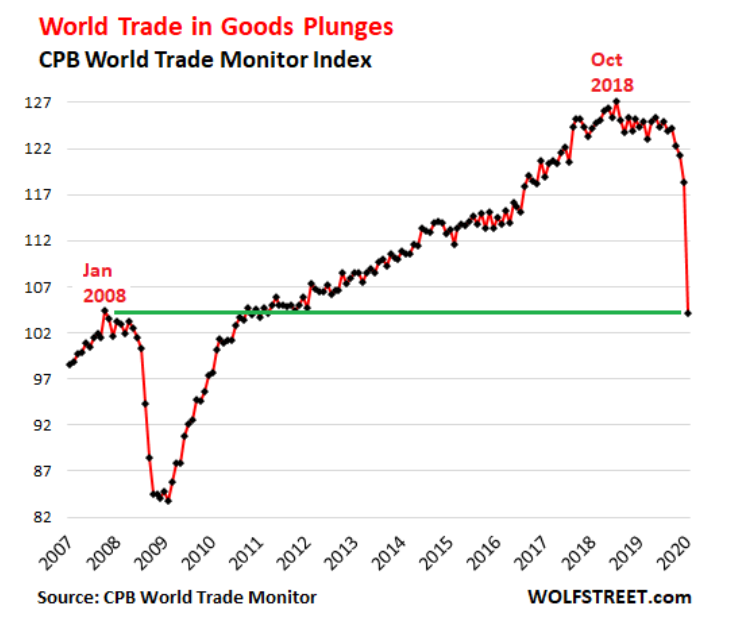 Now world trade has returned to its January 2008 levels.

As shown below, real potential US GDP has been on a declining trend since the 1950s and exponentially rising M1 money stock for the last 40 years has done nothing to reverse that trend.

I suppose the Federal Reserve doesn’t know what else to do other than to make M1 go vertical. However, does anyone really believe that exploding money supply is any kind of credible solution beyond an emergency stop gap?

The liquidity flood has to go somewhere and typically it boosts stock markets, but now there is a record gap, or “ Great Divide”, between stocks and GDP. Normally, that would suggest stocks were at risk of a sizable mean reversion.

However, the Federal Reserve has trapped itself in its own distortions, and sees ever greater danger in any policy reversal. Rather than face up to this policy failure it prefers to compound the problem.

MMT means unlimited debt for spending, financed by more and more money printing. This has created the greatest ever divide between the stock market and GDP since 1947, measured in US dollar terms. This is happening as GDP has become increasingly dominated by government debt and spending.

All that MMT does not seem to be doing much for GDP, but at least it helps inflate the stock market in US dollar terms. Why doesn’t that work economically? Isn’t MMT the same policy tried in Argentina, Zimbabwe, etc… ?

The broken correlation between US stocks and GDP, in my view, shows how much the US stock market has become distorted by MMT and also demonstrates that this policy is already failing, as GDP is still not responding. 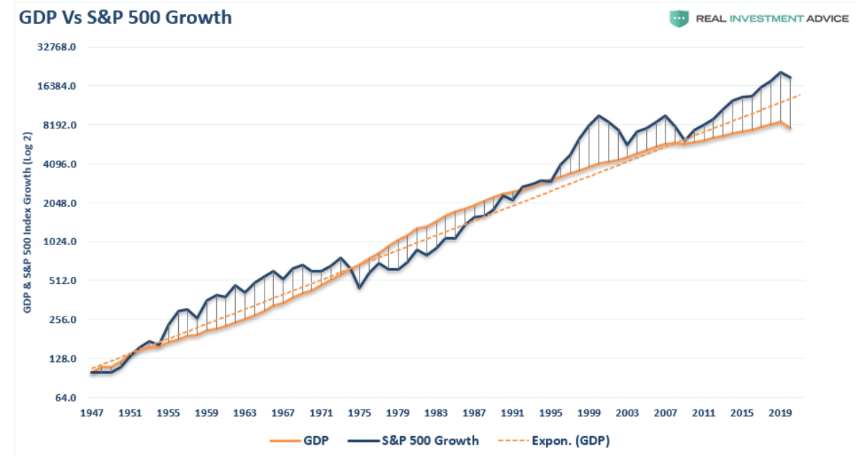 MMT means more money for more debt. So Central banks are now working in tandem with expanding fiscal policies. The scale of balance sheet expansion this year is breathtaking, and likely to continue. 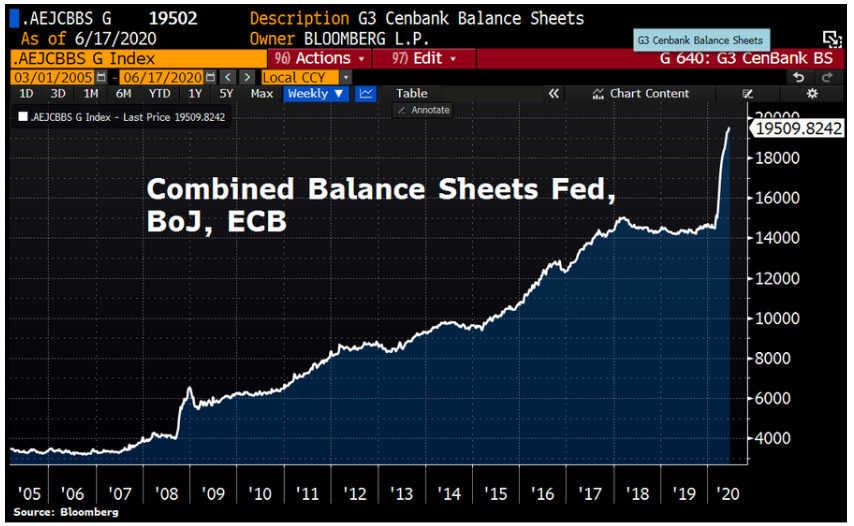 The National Debt chart is also a wonder to behold even prior to any recession or the next stimulus package. 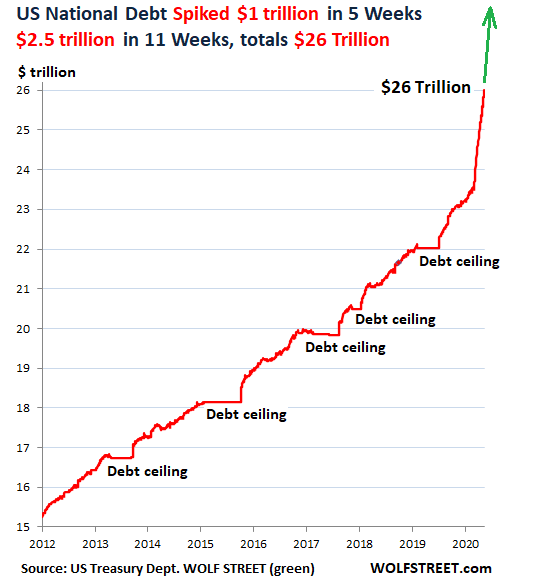 The chart below demonstrates the US corporate sector is failing just as spectacularly. So much debt and buybacks, yet so few profits, with almost no discernable profit growth for the last 8 years!

The same phenomena is visible in Europe. In the last 20 years, the chart below shows that the European Central Bank has increased its assets by over a multiple of 5, or around 5 Trillion Euro. Yet the Euro economy only got weaker even before its recent collapse. Real GDP has only experienced a series of lower highs for 20 years. Even as asset purchases continue to rise exponentially.

Beyond the obvious track record of failure it seems increasingly difficult for central banks to even keep their narrative straight.

The Fed’s record continues to weaken even as it abandons normal accountability or constraints. Worse still, this process just continues to accelerate. The series of policy reversals has become so plentiful that it is hard to keep up!

1. QT is on autopilot. Until it was cancelled entirely a few months later.
https://www.marketpulse.com/20190104/powell-stays-course-economy-takes-back-qt-auto-pilot-comment/

2. Also in the above link. Taking interest rates above “neutral” was overly hawkish in a weak economy, and had to be walked back.

3. Emergency Repo is temporary. Not so fast. https://www.thestreet.com/mishtalk/economics/tip-of-the-iceberg-emergency-repos-stretch-to-2020-q2

4. The Fed’s policies “don’t contribute to wealth inequality”, when they obviously do. 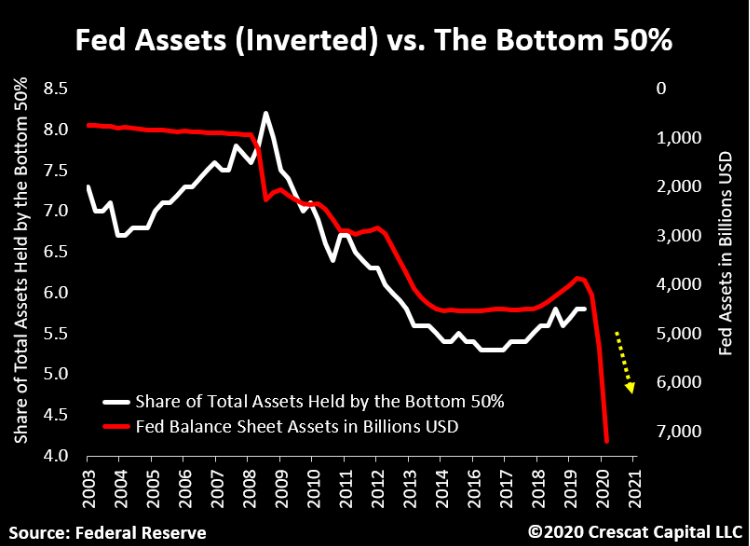 This growing list of confusion together with the central bank’s ongoing policy failure is leading to what I believe is a credibility crisis.

Central Banks are now so large, market function and price discovery is compromised. The scale of central bank activity is now so huge that market prices are no longer providing reliable information.

All the absolute performance for most of May and June was in overnight price moves. The huge move over that time came with zero cumulative price change in the day sessions. 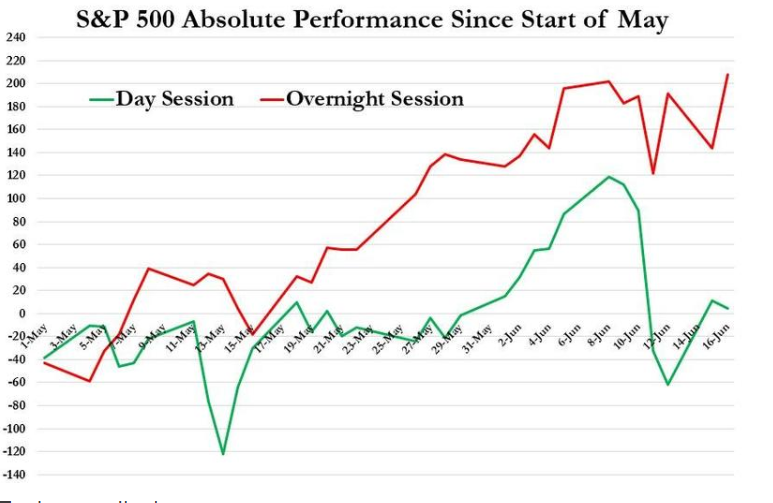 Most traders have recognized we are in an altered state. Keith McCullough is open about believing that “Futures Markets Are Being Centrally Planned including in overnight market pricing.”

Some analysts are astonished that the Federal Reserve has started buying junk bonds and are questioning if that is  even legal.

This is a time where it is unusually difficult to make strong statements or take committed positions. For that reason, I favor staying with low risk cyclically appropriate high expected return positions.

Risk management is as essential as active management if you have less than full confidence in policy bailing you out, or doubt policy is even  productive. The outlook has become highly complex and increasingly unpredictable.

The Faster You Can Move The Less You Have To Predict.

Debt is being stretched too far.

While even more debt may provide a stop gap. I believe that it will just create an even greater economic burden down the road. It may even be making it worse right now. 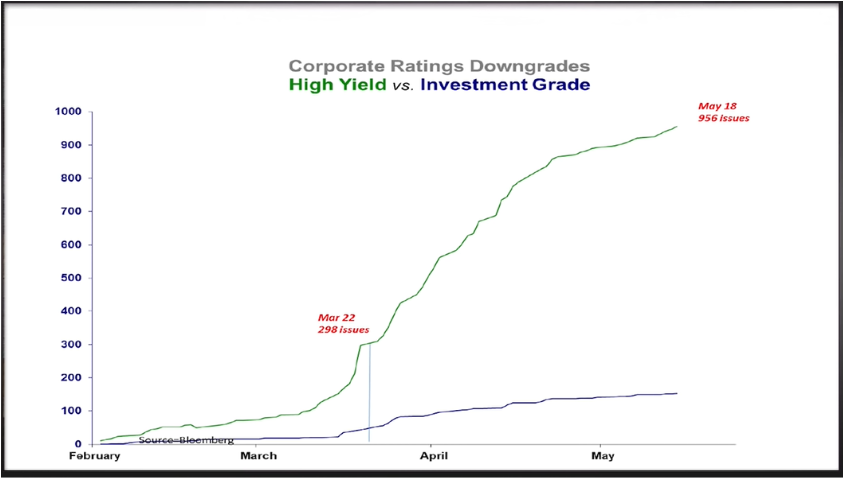 For all the extreme measures taken the ratings agencies have continued with their own ratings downgrades which are running at a rate on track to dwarf the experience of 2008/09.

This is where MMT will meet insolvency. The economy continues to be impaired by the dysfunction of policy, and MMT can’t create revenues, jobs and profits for everyone.

Stephanie Pomboy and Keith McCullough had a great conversation trying to figure out how this can get resolved, which you can access in the link below.