The belief system is breaking down

On Wednesday this week the Fed cut its GDP forecast, inflation forecast, and interest rate forecast. The table below shows all these changes which includes a 50bp cut in expected rate rises this year.

As for the last 8 years the Fed has had to return to stepping back from its constantly overestimated growth and inflation forecasts. No surprise, therefore, that the dollar weakened, and broke the 3 year uptrend channel versus gold as shown above.

The belief system is breaking down

Keith McCullough explains why the belief system in Fed policy is breaking down. Despite all the confident talk about the economy, the economic cyclical downturn persists and is pronounced and pervasive.

“The inexorable declines in trend NGDP growth have become even more evident lately. Specifically, trend NGDP growth is under 2% in Germany (top panel) and France (middle panel), and just about ½% in Italy (bottom panel). To place this in perspective, please note that trend NGD growth has fallen to 3¼% in the U.S. (not shown), where 5% NGDP growth — the sum of the Fed’s 2% inflation target and a “realistic” trend growth of 3% in real GDP — was considered a standard definition of “business as usual” not long ago.”

“The current decline in US manufacturing would be the first time since 1952 that Industrial Production has declined for four straight months without the US economy not being in recession.”

“Thanks to dramatic downward revisions retail sales have dropped 0.54% in the last two months – the biggest sequential drop in a year.

While the YoY change rose from +3.0% to +3.1%, it remains below historically-recessionary levels and given the revisions suggests Q1 GDP growth markdowns are on their way with sales down MoM for every cohort from gas stations to furniture.”

“Unlike retail sales in January, wholesale sales won’t need revisions to become highly negative in either the seasonal or unadjusted versions. On a seasonally-adjusted basis, wholesale sales declined rather sharply in January (-1.35% M/M), the fourth consecutive decline, sixth out of the past seven months and making fourteen of the past eighteen since all this began.” Inventories seem to have reached the point where real weekly earnings are now falling with escalating unsold goods.

Naturally with all of the above data, 2016 GDP estimates are falling fast, but miraculously the S&P 500 continues to rally.

“Standard & Poor’s 500 Index constituents are poised to repurchase as much as $165 billion of stock this quarter, approaching a record reached in 2007. The buying contrasts with rampant selling by clients of mutual and exchange-traded funds, who after pulling $40 billion since January are on pace for one of the biggest quarterly withdrawals ever.” At this point big cap US stock divergence is nothing new. One should have come to expect “inexplicable” relative strength in defiance of all historical norms. However, it is worth noting that this quarter the reversal in the Dow is on track to break a new more than 100 year old record. 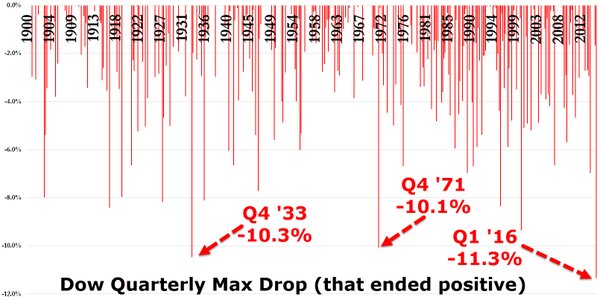 As we pointed out last week the short term moves in the “markets” are becoming increasingly ………….  strange.

Surprisingly, an ex-Fed governor, Larry Lindsey, explains why all this could be leading to a return to the gold standard.

With the break in the 3 year trend of the dollar versus gold, persistent economic weakness, and collapse in confidence in the Fed’s policies, this is clearly a time for reviewing the appropriate allocation to gold, and the ways in which it can be owned.

There are very few analysts like Jim Rickards, that are so well versed on the history and arguments for gold, have first hand experience in the physical gold market. Now would be a very good time to pay close attention to gold. If it is time to seriously think about your gold allocation this interview is a must.