Earnings will fall much further

Small business: “There Is No Exuberance, No Optimism And Not Much Hope”. Optimism diverges from S&P 500

“The US economy has never – ever – seen Industrial Production drop YoY for seven months in a row without being in a recession.”

The IMF seems to have noticed the “Spiral of waning growth, escalating debt”

As the chart above shows all too clearly. Usually when corporate cash flows (EBITDA) decline, net corporate debt follows. However, apparently not in the asset price rigging world of today’s stock markets.

Indeed, the problem has become so bad that:

It is so bad, in fact that:

” all you need for a balance sheet crisis is declining equity markets, a phenomenon the Fed appears desperate to avoid. Now we know why .”

Yet presumably the buying is just coming out of even more debt and as the earnings and cash flows continue to fall with rising stock prices the market just has to keep on getting even more dislocated from valuation or economic norms!

“With the ECB now unabashedly unleashing a bond bubble in Europe of which it has promised to be a buyer of last resort with the stronly implied hint that European IG companies should issue bonds and buy back shares, and promptly leading to the biggest junk bond issue in history courtesy of Numericable, it will come as no surprise that the world once again has a debt problem.

For the best description of just how bad said problem is we go to SocGen’s Andrew Lapthorne, one of last few sane analyzers of actual data, a person who first reveaked the stunning fact that every dollar in incremental debt in the 21st century has gone to fund stock buybacks, and who in a note today asks whether “central bank policies going to bankrupt corporate America?”

Earnings will fall much further

“Profit margins are declining, and we expect them to fall much further.  As you can see from the chart below, Variant Perception’s leading indicator for wages does a very good job of leading US corporate profit margins by a little over a year and a half. The message is that we should see profit margins fall for all 2016 and bottom early next year.  It is unlikely P/E multiples will expand, as they did in 1999-2000 when profit margins fell, and much more likely that stocks will trade down in line with earnings.”

Investors should consider the most defensive strategies for their equity allocation in this environment. My own preference is a buy/write strategy based around the strongest stocks with a very clearly worked out risk management strategy using tradestops software, as has been described in recent weeks.

The focus of equity stock selection is also very key. For me it is based on the “dividend aristocrats”. Here is how that basket is doing. 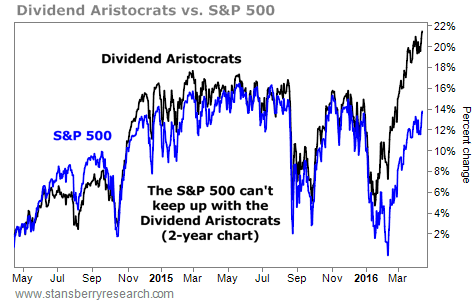 Small business: “There Is No Exuberance, No Optimism And Not Much Hope”

As NFIB optimism also crashes to the 2012 lows. It seems that the S&P 500 is ignoring that too!

Stocks massively diverge from Treasuries too! 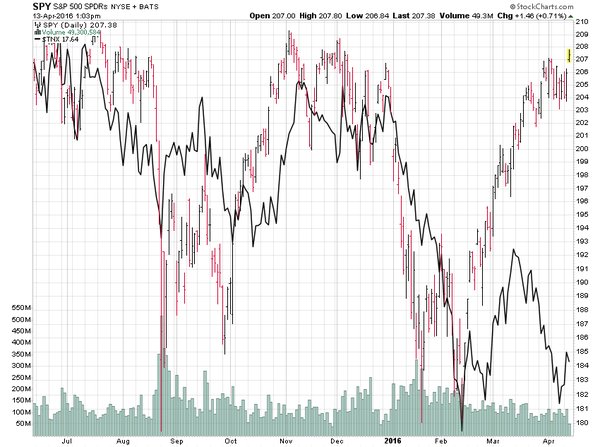 Not just is the Atlanta Fed Q1 GDP forecast now close to zero for the first quarter, but Hedgeye’s Q2 2016 forecast is at -0.5. The US could easily already be in a recession.

“The US economy has never – ever – seen Industrial Production drop YoY for seven months in a row without being in a recession.”

The IMF seems to have noticed the “Spiral of waning growth, escalating debt”

Titled Too Slow For Too Long, it seems as if the institution has finally caught on to the fact that the global recovery never really was a recovery. Throughout the report you get the sense that they are starting to figure out what is going wrong but are prevented from recognizing the full extent by their ideological devotions.

Just like the Fed it seems that something must have gone wrong with their forecasts. “The IMF “hears” secular stagnation even though they detail all sides of the eurodollar system’s ongoing decay because mainstream theory does not allow observation. Instead, orthodox economics only permits “what should be” even where “what is” could not be more apparent. That is why, even after five years of these downgrades and continual slowing, the IMF still predicts a turnaround (though less robust) just around the corner even though the trend is clearly entrenched. This is not an insignificant difference; at the end of secular stagnation is downgraded growth, but steady growth nonetheless. The final stage of a slowdown based on monetary decay and restriction is likely to be nothing like that.”

Perhaps, it would be better to consider what a consistently accurate forecaster has to say, and fortunately Dr. Lacy Hunt’s Q1 review has just been released:

“Our economic view for 2016 remains unchanged. The composition of last year’s debt gain indicates that velocity will decline more sharply in 2016 than 2015. The modest Fed tightening is a slight negative for both M2 growth and velocity. Additionally, velocity appears to have dropped even faster in the first quarter of 2016 than in the fourth quarter of 2015. Thus, nominal GDP growth should slow to a 2.3% – 2.8% range for the year. The slower pace in nominal GDP would continue the 2014-15 pattern, when the rate of rise in nominal GDP decelerated from 3.9% to 3.1%. Such slow top line growth suggests that spurts in inflation will simply reduce real GDP growth and thus be transitory in nature. Accordingly, the prospects for the Treasury bond market remain bright for patient investors who operate with a multi-year investment horizon. As we have written many times, numerous factors can cause intermittent increases in yields, but the domestic and global economic environments remain too weak for yields to remain elevated.”