But what do earnings have to do with stock markets?

Low Risk and Some Real Assets

The header chart shows the inflection point for earnings, a signal that occurred each time prior to the last three economic recessions. That data used mainly the Q2 2015 data.

Now Q3 earnings are coming out

and so far they look worse than Q2 as you can see from the chart here. It looks like an earnings recession is occurring immediately following the revenue recession flagged a  few months ago.

Certainly judging by Caterpillar’s results, where 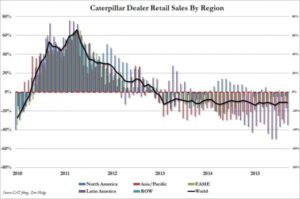 sales globally have been negative since early 2013, currently there does not appear to be any global region experiencing positive growth, including North America. The chart here is more reflective of a global industrial depression.

But what do earnings have to do with stock markets?

While the fundamentals for the economy

and stocks are now clearly turning down or already in a downtrend, this does not seem to have much impact on the S&P 500, which now responds much more to other factors.

“An EPS “Beat” is now simply a function

of how much stock a company has managed to buy back at the expense of future growth and productivity and the degree to which analysts have slashed their estimates over the course of the reporting period.” As you can see from the chart here 2015 buybacks have broken all records. Great for stock related remuneration, but how leveraged should the balance sheet become?

There is another reason why the S&P 500 is holding up.  Quite often the central banks themselves want to get in on the action too. Tragically, we have almost reached the 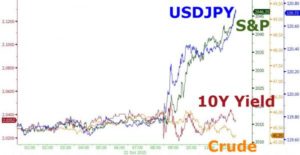 point where the main reason for rising stock prices is central banks panicking, and buying stocks with endlessly printed Yen, which constantly shows up in the correlation of USD/JPY and the S&P 500.

The chart shows how much stock market rallies often correlate highly with the USD/JPY, and this is happening all the time. The Q4 2014 stock market rally was one of the biggest in history and coincided with the biggest ever launch of a QE program by the Bank Of Japan, and a huge rally in USD/JPY. High stock prices are one of the few remaining elements of policy credibility that central banks still have and they clearly fear an uncontrollable decline in the stock market as they have very few tools left in their broken policy bag.

This has become a world wide phenomena at this stage. Both Europe and Japan are still experiencing huge QE programs with very little benefit to show for it. However, China, these days seems to set new standards in extremes.

“With the real economy nevertheless showing 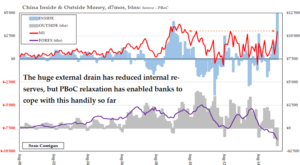 few unequivocal signs of improvement, the corresponding jump in autonomous, ‘inside’ money creation by the commercial banks—as opposed to that originating ’outside’ at the central one—is a double-edged sword. On the one hand, such a rebalancing toward more liquid means could revitalize corporate spirits—not least by eroding the mountain of receivables: on the other, if no renaissance occurs, the most volatile of banking liabilities will have risen even as upward pressure on earnings and NPLs intensifies—a potentially combustible mix.

What should also be a matter of some concern is that even by the official, highly disputed reckoning, Nominal GDP this past year has only grown by 6.2% – a relative snail’s pace of the kind seen at the height of the last two great upheavals,viz. the 1997-8 Asian Contagion and the 2008-9 GFC itself. Strip out a supercharged, bubble market ‘contribution’ from the financial sector and it gets worse, dropping to just 5% yoy.”

Essentially central banks and corporate executives are using any means necessary to inflate asset prices and these mechanisms are becoming increasingly desperate, distorting, and unsustainable.

So our tour of the world of finance reveals an ever more perilous situation, where the banking system is straining leverage, and money printing far beyond anything that could be regarded as remotely sustainable. Its impact on markets is clearly powerful, but seems to be declining as the underlying real economic conditions seem to continue to wane no matter what policy extremes the banks induce. This process is very hard to stop as there seems no real alternative option. Any halt in policy acceleration, would bring on a potential catastrophe they want to avoid. So crazy ride it is, but don’t be fooled by what it is.

Low Risk and Some Real Assets

Our Cycle Dynamic systems are picking

some new market preferences in market performance. While equities are experiencing a healthy bounce, real assets have begun to outperform, most notably in REITs and precious metals. Credit is very weak and already peaked over a year ago. Balance sheets continue to deteriorate at a rapid rate so weak credits should continue to be avoided.

Investors need to understand that US equities have been riding an historic wave of central bank/corporate engineering which, while not over, has become extremely tenuous. This is not a time for focusing too much on short term performance, it is a time for focusing on a low risk allocation that can survive the unwinding of record levels of extreme distortion in asset prices, which have become increasingly disconnected from underlying fundamentals. Low risk means that an investor will have the capital to deploy when the major opportunities return.