Stagflation Is Coming. US Investors Completely Unprepared. Missing Half The Policy Duality.

US bank loans peaked at the lowest level of any cycle going back to 1967 and have now rolled over.

$1 trillion of financial assets just in the first four months of 2017, which amounts to $3.6 trillion annualized, “the largest CB buying on record.”

China and Asia have almost completed their preparations for systemic failure

The last time US investors got this excited the market crashed

Purposeful Confusion Between Liquidity and Fundamentals. US Investors fail to understand economic Duality.

The chart above demonstrates the inability of the private sector to provide sufficient credit for self sustaining economic growth since 2008.
Despite the historic efforts of policy makers, with all time record low interest rates, money pumping and debt explosions around the world, US bank loans peaked at the lowest level of any cycle going back to 1967 and have now rolled over.
The euphoria is solely related to the stock price engineering and other temporary efforts to keeping the failing system alive.
“the largest CB buying on record.”

“central banks (ECB & BoJ) have bought $1 trillion of financial assets just in the first four months of 2017, which amounts to $3.6 trillion annualized, “the largest CB buying on record.” 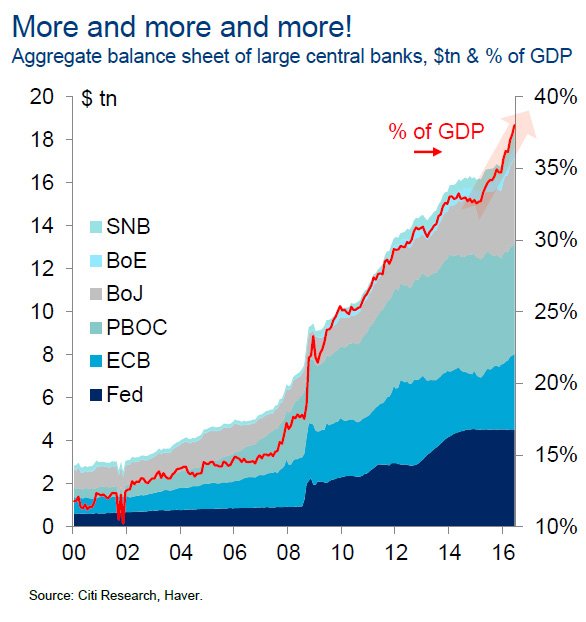 Trump’s tax plans are ultimately a different version of the same central bank policy
Deficit spending at this stage will end up only increasing the liquidity demands from the central banks. There is no private or government capital to provide the finance.

Richard Duncan explains in this abbreviated summary of his recent video on the liquidity gauge.
“It has long been understood that when the government borrows excessively, it pushes up interest rates and Crowds Out the private sector.

Before the breakdown of the Bretton Woods International Monetary System, money was backed by gold. Consequently, there was only a limited amount of it and governments had no power to create any more.

However, the breakdown of Bretton Woods in 1971 brought about a monetary revolution that changed the way the global economy worked. Money ceased to be backed by gold, trade between nations no longer had to balance, large capital flows between nations emerged, and central banks began creating money on a very large scale.

Now, it is not only the government’s Demand for money that impacts interest rates and asset prices. The Supply of money from foreign capital inflows and the creation of new money by central banks does too.

The latest Macro Watch video updates this Liquidity Gauge and projects it out for the next five years. In addition to the base case scenario, four other scenarios are analyzed to show their impact on Liquidity.

Scenario 1 looks at the consequences of eliminating the US Current Account Deficit as President Trump has pledged to do.

Scenario 2 considers the impact that a fiscal stimulus program would have.

Scenario 3 discusses what would occur if the Fed begins to “Normalize its balance sheet” as it is now threatening to do.

The final scenario shows the effect that scenarios 1 to 3 would have in combination.

The outcomes range from bad (in the base case) to catastrophic in the last scenario where the current account deficit is eliminated, a fiscal stimulus program is introduced and the Fed begins to normalize its balance sheet all at the same time.

Even in the most favorable scenario, Liquidity looks set to remain negative ever year through 2021. In other words, the government’s demand for money will exceed the supply of money from capital inflows and Quantitative Easing. The resulting drain of Liquidity is likely to put upward pressure on US interest rates and downward pressure on US asset prices.

Crowding Out is back. Liquidity is already negative. Any policy that would make it even more negative could cause a very significant correction in the stock market and the property market, where prices are already very stretched. A combination of policies that produced a much larger Liquidity Drain would almost certainly cause asset prices to CRASH.”

China and Asia have almost completed their preparations for systemic failure

Have US investors considered how all this looks from an Asian perspective?
https://wealth.goldmoney.com/research/goldmoney-insights/americas-financial-war-strategy

The last time US investors got this excited the market crashed
“A few days ago Charles Schwab, the investment brokerage firm, announced that the number of new brokerage accounts soared 44% during the first quarter of 2017. More specifically, Schwab stated that individual investors are opening up stock trading accounts at the fastest pace the company has seen in 17 years. 17 years.

And that’s what seems to be happening today.”
https://www.sovereignman.com/trends/the-last-time-this-happened-the-market-crashed- 21379/

Purposeful Confusion Between Liquidity and Fundamentals. US Investors fail to understand economic Duality.

Investors need to understand that if central banks are injecting money into the system at a rate over $3 Trillion there are 2 things going on at the same time . Policy makers say everything is great, but in reality they are panicking because they believe they have to inject this amount of money to keep the system going. However, this money does not get to where it should be allocated it just ends up in the “markets”. Then investors confuse economic success with out of control panic policy measures.
People get euphoric because it seems like a persistent miracle, that’s what they are supposed to believe. However, after more than 8 years since the collapse, it should be obvious by now that its just a mirage about to go beyond its sell by date.
There may also be euphoria about Trump’s tax plans. But as explained above this will only create an intensification of liquidity demands from the central banks.
It should be equally clear that no matter how much money they inject its not going work in a sustainable fashion. Nevertheless, Central banks are going to keep accelerating the liquidity, because this is the only mechanism that can avert an outright collapse in the short term.
In the end it will become obvious that global policy making, far from solving problems are creating them. Policy makers are completely unable to generate real sustainable growth of any kind. However, as they continue to pump money into the system at an accelerating rate they will be able to generate inflation, by destroying the value of their currencies, and they will settle for that as the lesser of two evils.

Stagflation is coming. US investors are in general completely unprepared.