“The Fed By The Numbers – And Why They Are Wrong.”

Steve Keen not only predicted the crash of 2008, but he has also done more than anyone else to explain why this was so predictable.  He is the author of “Debunking Economics”, which rigorously exposes the logical flaws in the key concepts of conventional economics.

After last weeks interest rate rise he explains why the Fed’s models are still wrong , and what this means for the economy next year.

“The Fed By The Numbers –  And Why They Are Wrong.”

“The economy is growing now because private credit is expanding at about 6% of GDP per year. This is a long way below the unsustainable rate of 15% per year that it hit just before the crisis began, but it’s enough to boost the economy a bit—and inflate asset markets a lot, since assets are what 90% plus of the borrowed money is actually spent on in the first instance. 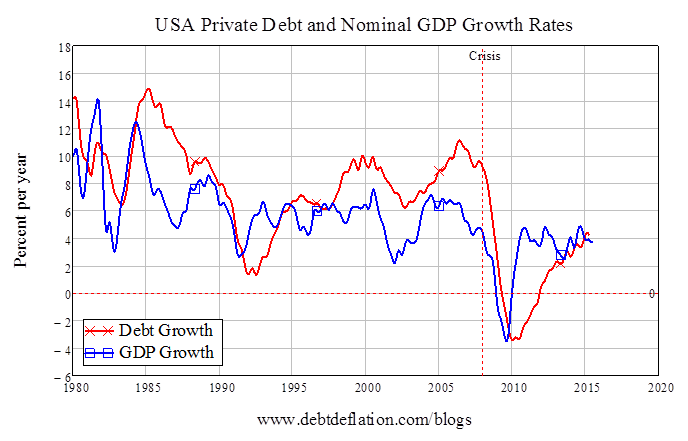 The dilemma this poses for The Fed—a dilemma about which it is blissfully unaware—is that a sustained growth rate of credit faster than GDP is needed to generate the magic numbers on which it is placing its current wager in favor of higher interest rates.

The Fed, along with all mainstream economists, dismisses this argument on the basis that the level of private debt doesn’t matter to the macroeconomy: for every debtor who can spend less because of higher rates, there is a saver who can spend more, so the two effects cancel out. This is naïve nonsense, because it pretends that banks don’t create money when they lend—which they do, as the Bank of England recently explained in painstaking detail—and equally, destroy it when they take in more in repayments than they pay out in new loans. So expanding bank credit adds to demand (and income and capital gains) in the economy, while contracting bank credit subtracts from demand.

With bank credit expanding at about 6% per year, total demand in the economy is expanding fast enough to give the appearance of a recovery: recorded unemployment now seems to be back to pre-crisis levels, and asset markets have boomed. But a few rate hikes over the next year will be enough to trigger a reversal in credit growth, because the level of private debt is substantially higher than it was when the last big boom began in the mid-1990s. The increased debt servicing burden will put enough debtors into distress to cause credit growth to slow down, and when it does, so will the economy.

The Fed will then be forced to do what every other bullish Central Bank has been forced to do since this crisis began: reverse direction and cut rates once more as the economy tanks, rather than returning to “Equilibrium”. It will never get back to its preferred Federal Funds rate of 4% until it learns, finally, that credit matters, and it starts to consider policies to reduce private debt to a manageable level—which is something like half its current number of 142% of GDP.”