Posted on November 1, 2018 by Chris Belchamber 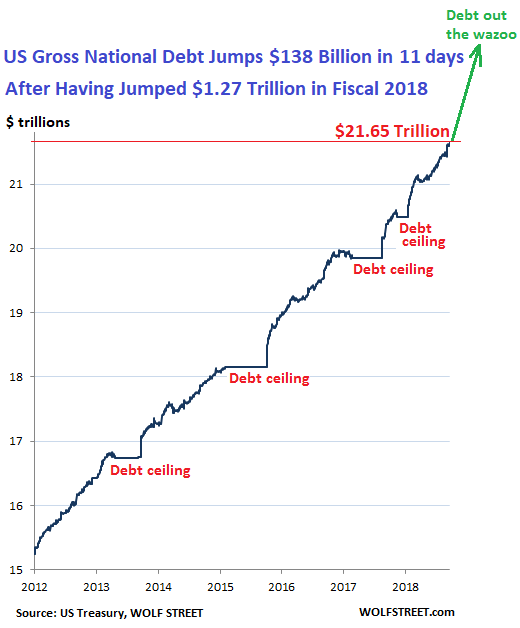 Investors in US equities should no longer be under illusions about what is the main driver of the rally since 2009. Debt, and government debt in particular. Attribution was examined in detail here:

The S&P 500 has left pre-tax earnings far behind, cumulatively around 50%! Pre-tax profits are cumulatively almost unchanged since the beginning of 2014. 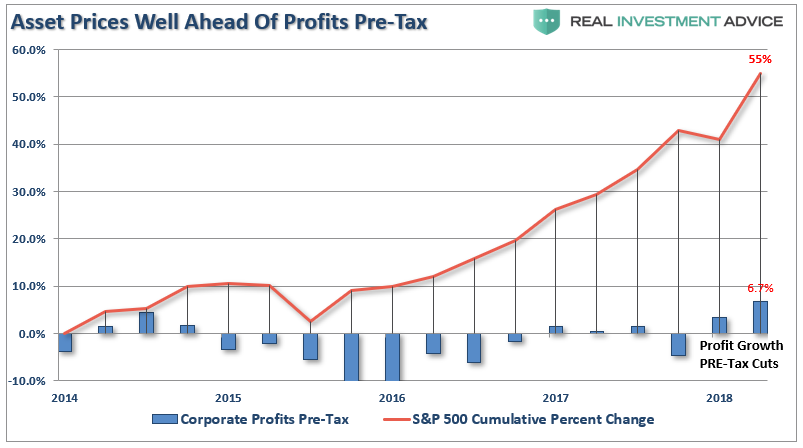 Given how overwhelmingly important the rate of debt growth is to the US stock market, it is worth examining the debt outlook in great detail. Here are 5 key questions:

1.Can debt continue to grow at or above the current astonishing rate, even during boom times?

2.Who will be able and willing to buy all the accelerating debt requirements?

3. How much growth does debt generate any more?

4. What happened to 21 trillion dollars of unaccounted balance sheet adjustments?

5. When will interest rate rises bite?”

Can debt continue to grow at or above the current astonishing rate, even during boom times?

US government interest payments are already running at $1.5bn a day, and are estimated to jump to $2bn a day next year. 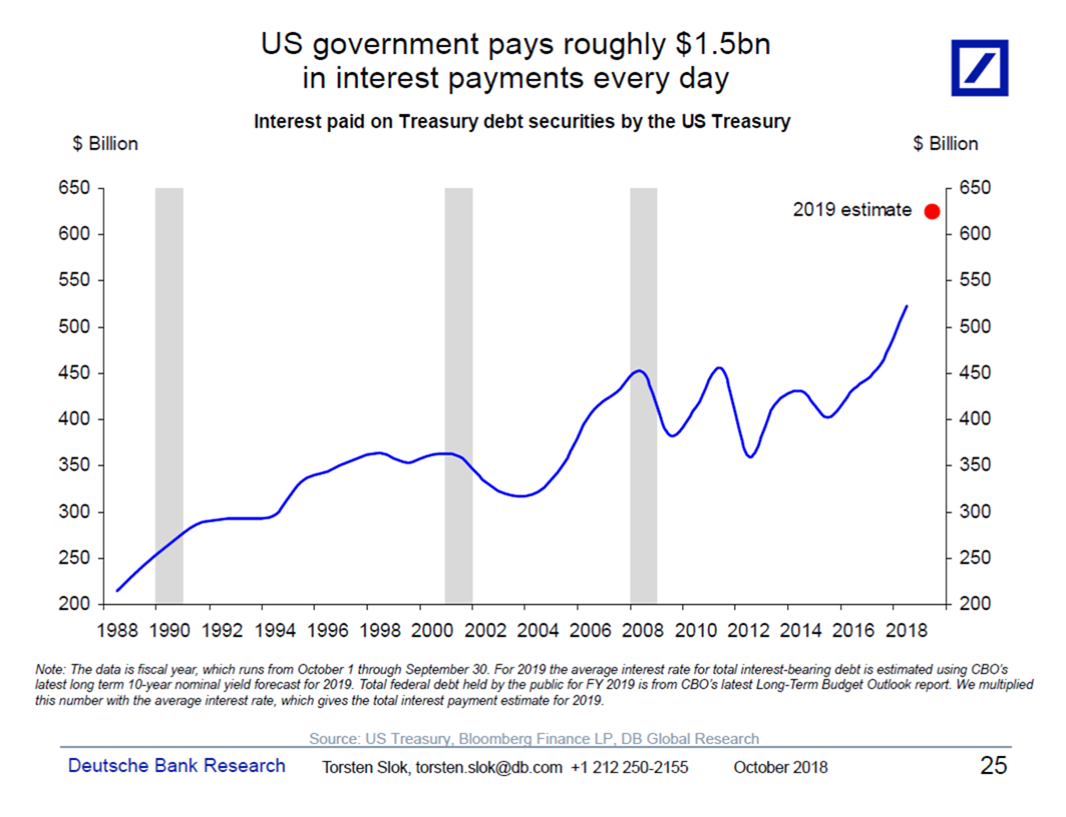 So on top of all the other mandatory government expenditure, which continues to rise, interest payments are soon going to be the biggest item. Will the US soon need to borrow just to pay interest on debt?

Could the US realistically even think about raising rates significantly if it needed to? 5% interest rates are historically not excessive, say with 2% inflation and 3% growth, but this level of interest rates could approximately double current interest payments!

This is all happening in boom times, typically government deficits hit their peaks during a recession. What fiscal measures will be available to the US during the next recession with probably the largest deficit in history?

Who will be able and willing to buy all the accelerating debt requirements?

The two largest international sponsors of US Treasury holdings, China and Japan, have a declining allocation, in percentage terms of US debt over the last 3 years, as shown below.  Meanwhile, Russia has liquidated almost all its US dollar reserves. International investors don’t currently seem to be a good sponsor of ever expanding US debt. 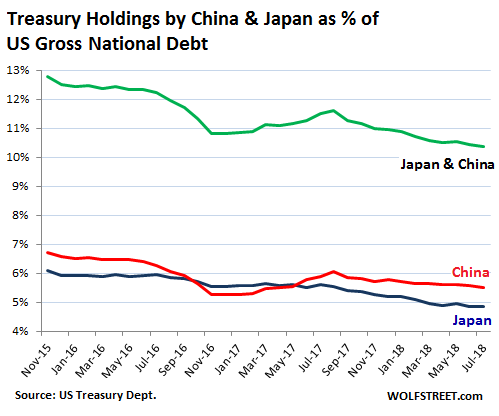 The Federal Reserve has also been reducing their holdings for around a year now, and has a continuing program of reducing its allocation. 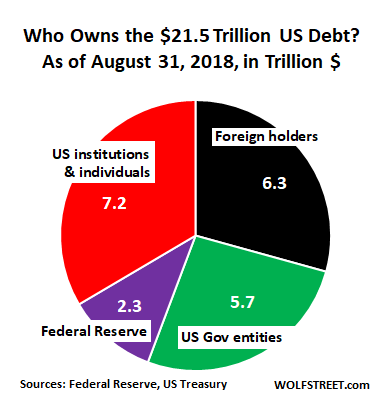 The only other major owners are US government entities and domestic institutions and individuals. With Treasuries offering minimal real yields it is hard to see the private sector increasing their holdings.

It seems that it is getting hard to find a sufficiently reliable source of funds for US government debt currently.

How much growth does debt generate any more?

“Lacy Hunt tracks Bank for International Settlements data that shows debt is losing its ability to stimulate growth. In 2017, one dollar of non-financial debt generated only 40 cents of GDP in the US and even less elsewhere.

This has significantly worsened over the last decade. China’s debt productivity dropped 42.9% between 2007 and 2017. That was the worst among major economies, but others lost ground, too. All the developed world is pushing on the same string and hoping for results like we saw 40–50 years ago. As my friend Rob Arnott constantly reminds me, hope is not a strategy.” 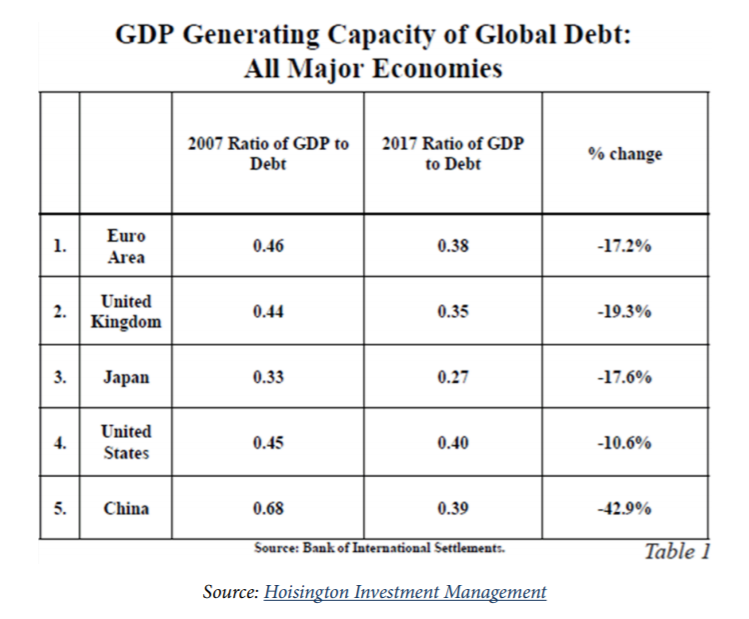 “Household and corporate debt is growing fast, too, and not just in the US. Here’s a note from Lakshman Achuthan. Notably, the combined debt of the US, Eurozone, Japan, and China has increased more than ten times as much as their combined GDP [growth] over the past year. Yes, you read that right. In the last year, the world’s largest economies are generating debt 10X faster than economic growth. Adding debt at that pace, if it continues, will boost the debt-to-GDP ratio at an alarming rate.

Remarkably, then, the global economy—slowing in sync despite soaring debt—finds itself in a situation reminiscent of the Red Queen Effect we referenced 15 years ago, when tax cuts boosted the US budget deficit much more than GDP. As the Red Queen says to Alice in Lewis Carroll’s Through the Looking Glass, “Now, here, you see, it takes all the running you can do, to keep in the same place. If you want to get somewhere else, you must run at least twice as fast as that!”

What happened to 21 trillion dollars of unaccounted balance sheet adjustments over the last 20 years?

With financing needs accelerating at a dramatic pace, and funds needed at an accelerating rate, the integrity of US finances has rarely been more important. 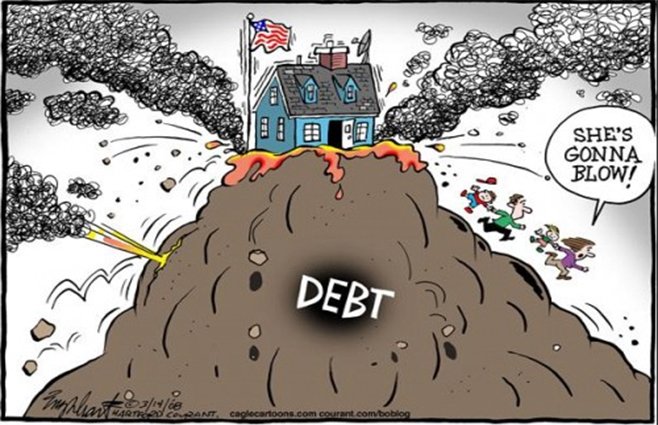 Already, the US has been singled out with a debt reprimand by the IMF earlier this year.

I believe increasing funding requirements require greater scrutiny and credibility. However, now there is a new problem. Transparency  and integrity are important once you get to talking about $21 Trillion gone missing!

“Michigan State Economics Professor Mark Dr. Skidmore says there is a limit to money printing even when all the global central banks are doing it.  Skidmore says, “What does it mean when a central bank is buying equities, or buying debt with printed money in order to suppress interest rates and keep this game going?  I think, overall, the whole world is awash in debt, and it’s expanding at a rate that is unsustainable. The only way it has been sustained is that interest rates have been falling for 30 years.  Now, interest rates are no longer falling, and we are running up against a constraint. Now, if this $21 trillion in “missing” federal money really represents spending above and beyond what the official records indicate, then that has huge financial implications and huge implications for confidence in the dollar as the reserve currency.  This is an enormous priority to address and not just cover up and say we are all good.”

In closing, Dr. Skidmore says, “How can you have a democracy if you don’t have any transparency whatsoever?  Having integrity and confidence is so essential to the whole system, and this just puts everything in question. . . . We should clean this up and show we are legitimate. If we don’t, we are just shooting ourselves in the foot.”

When will interest rate rises bite?

There are clearly enormous questions surrounding US security markets currently and its relationship to debt. Increasingly debt dynamics have become dominant. With interest on debt becoming the biggest budget item, and funding becoming more challenging, as described above, its now approaching the point of overwhelming the system in my opinion.

Richard Duncan explains in the next 5 paragraphs:

The combined Monetary Base of the 20 largest countries increased 23 times between 1985 and 2017, from $800 billion to $18.4 trillion.  And, nearly everywhere the ratio of total credit to GDP moved very sharply higher as credit growth outstripped economic growth.

Eventually, only one constraint remained on the amount of Money and Credit that could be created:  Borrowers still had to have enough income to service the interest on the credit they borrowed. That constraint was eased after 1980 as global interest rates declined thanks to the deflationary pressures resulting from Globalization.

Credit Growth became THE driver of economic growth, globally.  Capitalism, which had been fueled by Saving and Investment, was replaced by Creditism, which is fueled by Credit Creation and Consumption.

Creditism, however, requires credit growth to survive.  If Credit contracts, Creditism will go into crisis. If interest rates rise much more, Credit will contract.” 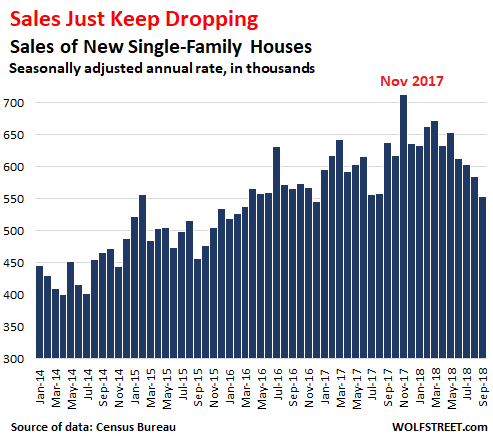 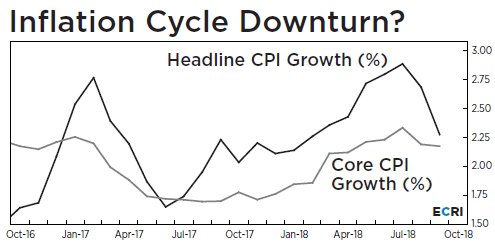 With the housing market peaking, and inflation peaking as well, any further rate rises by the fed will impose accelerating rises in real interest rates, with a feedback consequence of deepening  quad 4 (falling growth AND inflation).

Most likely the Fed’s rate rises are much closer to an end than the market is currently pricing.