Typically stocks bottom well after the first interest rate cut, which may take more time than is priced in to markets today.

Given the debt levels, it will be much more difficult to reach the real interest rates levels needed to contain inflation.

“Much worse than the 1970s”
Niall Ferguson

“The assumption that central banks can easily hike rates as they did back in the 1970s has a catch. Take the United States as an example. In the 1970s, US debt/GDP was 30%; nowadays, it is above 120%. And this is just government debt; things do not look better on the business level.”
Fabian Wintersberger

“The last 5 times US Inflation peaked above 5% it took a much higher Fed Funds Rate and a recession to bring it back down. Is this time different?”
Charlie Bilello

As most investors have never experienced current inflation rates in their investing lifetime it is well worth measuring current conditions against the last period of high inflation rates, the 1970s. The deeper one analyzes the comparison the more troubling the question in the title becomes.

There are many aspects to the comparison between the 2020s and the 1970s. The following headings take us through some of the key factors.

Currently the market is not anticipating interest rates at or above 5%, let alone 8%. 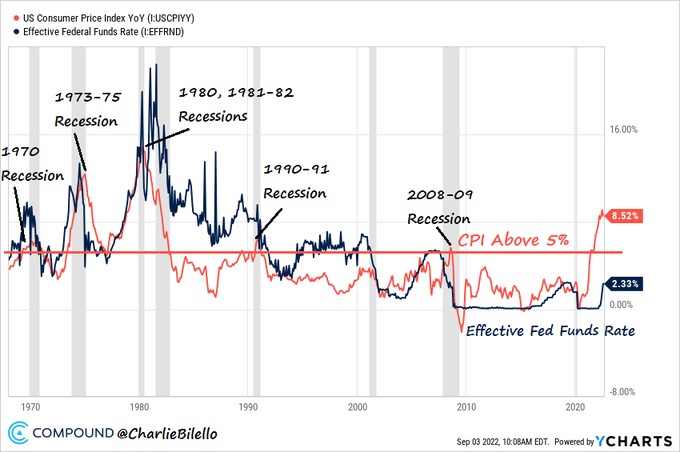 Debt has not only contributed to slower growth since the 1970s, it also makes higher interest rates much harder to execute as the scale and burden of refinancing becomes far more painful as interest rates rise.

The chart below shows that debt levels declined in the 1970s, even reaching a low point. They have risen dramatically ever since with a hiccup in the 1990s. This suggests that it may be an enormous challenge for the Fed to raise interest rates sufficiently to contain inflation. 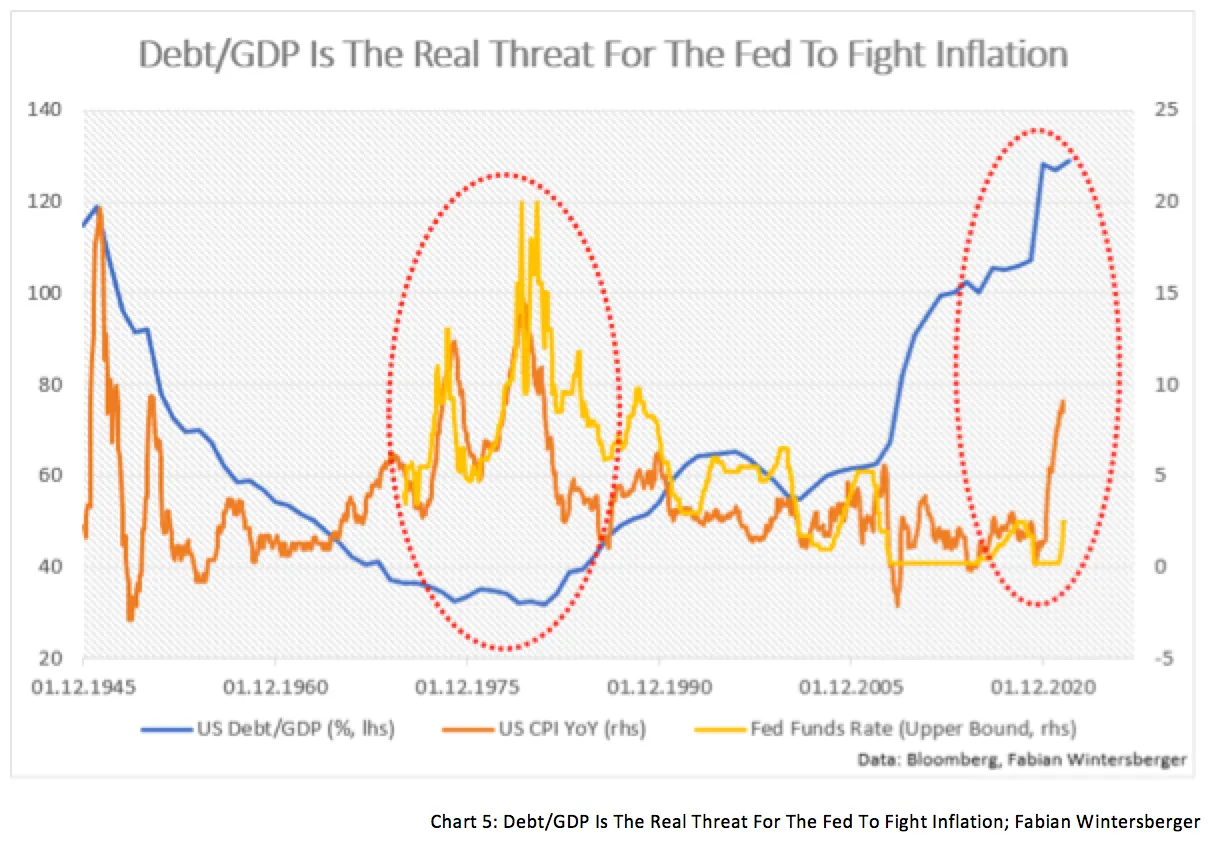 Record Policy Intervention going into the 2020s, despite their poor long term record.

In the 2020s, the intervention scaled new extremes following decades of increases in debt and record low interest rates. This escalated to the “Most Reckless Fed Ever” , which we discussed at the beginning of 2022. This itemized the excessive policy interventions, across the board. These interventions were clearly intentional as they were announced in the BIS annual report in 2019.

So now we see the cost. All these interventions have mainly delivered instability and inflation rather than sustainable growth. Yet, after decades of accelerating intervention, the violence and instability of extreme policy intervention continues. The Fed has switched from its extreme stimulus and “transitory” inflation view of 2021 to the most rapid and aggressive tightening of policy ever in 2022.

No one should be surprised about this dramatic reversal. Political expediency compels policy makers to do something “now”. Nevertheless, It is important to notice that long term growth has been declining for 70 years – as shown in the link above.

This pattern of intervention behavior with poor results is not new. It was observed almost 100 years ago, along with the inevitable consequences, as described in the legendary quote below.

“What generates the evils is the expansionist policy. Its termination only makes the evils visible. This termination must at any rate come sooner or later, and the later it comes, the more severe are the damages which the actual boom has caused.”
Ludwig von Mises

Geopolitical Transformation much more significant than in the 1970s

The link in this title goes to Goldmoney’s in depth analysis of a complicated transformation developing out of this years geopolitical developments. It is likely that these developments are highly significant yet still poorly understood. Here is a summary:

“The trade war against China started by President Trump combined with Putin’s initiative against Ukraine have led to the end of the benign global trade conditions that evolved since the 1980s. The combination of rising interest rates and the permanent collapse of global supply chains is the result of policies originated in the west.

These long-term trends tend to be understood, if they are at all, in retrospect. Politicians will pursue policies which they believe worked yesterday in changed conditions with catastrophic results. Both they and central bankers have dismissed the link between the expansion of currency and a fall in its purchasing power. Because dollars were bought by foreigners, the dollar was supported, giving rise to an illusion that the quantity of money has little or nothing to do with the inflation of prices. That is no longer the case. And if, as seems certain, the response to contracting bank credit and continuing supply chain failure is to reopen the currency spigot, there will be a rude awakening as to the inflationary consequences.“
Alasdair Macleod

There is a range of high quality research on the most likely outlook for inflation longer term. On current settings there is significant doubt about whether inflation will fall to the Fed’s 2% target in the next two years, without a severe downturn.

“If either the labor market doesn’t behave, or expectations don’t behave, the small increase in unemployment the Fed projects won’t be enough.” 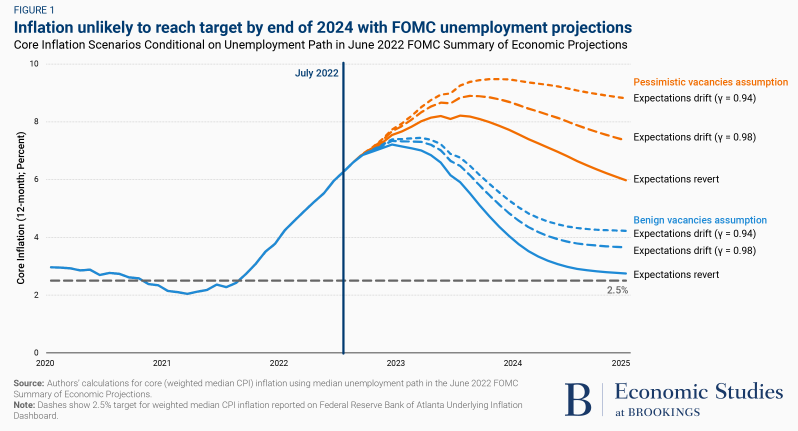 “History cautions strongly against prematurely loosening policy. I can assure you that my colleagues and I are strongly committed to this project and we will keep at it until the job is done.”

Niall Ferguson did us all a favor in challenging the complacency of a quick and effortless return to 2% inflation. All this year I have remarked that getting Fed funds above the inflation rate is an enormous challenge for the Fed.

The interest rate hiking challenge is likely to take longer than most expect, if the Fed is really serious about containing inflation. Beyond that it may be some time before interest rates can be reduced.

This will likely be a considerable challenge for equities as the chart below shows that equities typically hit a bottom only well after the first interest rate cut, which could be more than a year away. 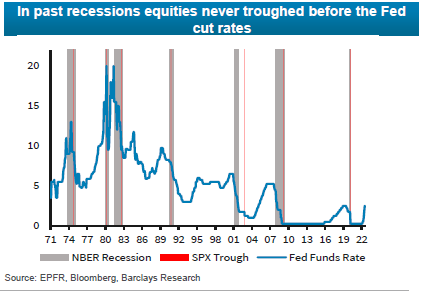 Just focusing on the comparison with the 1970s indicates a challenging decade ahead for growth and inflation. Investors need to be prepared for tough conditions with the highest possible standards for Investment Management.

If you’re not already a client of CB Investment Management, schedule a FREE consultation today. Let me use my expertise and proven track record to prepare your portfolio for the tough conditions ahead and transform you to a Best Investor.