Zero Projected Real Return For the Next 12 years From Standard Portfolio Allocation.

It is probably generous to call this a projected zero real return.

“Reason is slave to the passions”

Perhaps, investors should calm their emotions before reading on.

“When Speculators Prosper Through Ignorance”

If investors don’t understand the facts of the past, what chance do they have in making good decisions about the future?

6 Key Questions For Investors At The Highest Ever Equity Valuations And Weakest Long Term Growth Since The 1930s Depression.

It is probably generous to call this a projected zero real return.

Investors need to understand that the most accurate estimation, based on post 1950 back tested data, of the likely real return over the next 12 years from a standard asset allocation is around zero.
John Hussman has produced this exceptional analysis, which shows that using the closest fitting algorithm for subsequent 12 year nominal returns for a 60/30/10 S&P 500/Treasury/Treasury Bill portfolio. This calculation now projects the lowest returns in history and well below 2%.
Given a policy 2% inflation target and the near impossibility of sustaining sub 2% inflation with record debt, currently still expanding at more than 3 times the pace of the economy, a 2% inflation estimate seems reasonable, if not conservative. Then, this does not include taxes and fees!
It is probably generous to call this a projected zero real return.

“Reason is slave to the passions” as David Hume described over 200 years ago. In difficult financial conditions, in particular, investors feel they need returns. The majority can’t resist chasing what HAS “worked”. Unfortunately, this is why investors have terrible long term results simply because so many keep falling in to this trap.
This behavior is very typical and is the multi-decade conclusion that research at Dalbar has reached about investor behavior. All this says is that just wanting something doesn’t mean you will get it. Wanting something too much could mean you are less likely to get it if you don’t contain your emotions and do the necessary work.

“When Speculators Prosper Through Ignorance”

There is also the matter of chance. I doubt that anyone predicted 5 years ago that growth GAAP earnings and revenues would be chronically weak but the S&P 500 would still nearly double! Foresight is also famously unreliable.
“No Congress of the United States ever assembled, on surveying the State of the Union, has met with a more pleasant prospect than that which appears at the present time.”

“There can be little argument that the American economy as it stands at the beginning of a new century has never exhibited so remarkable a prosperity for at least the majority of Americans.”
– Alan Greenspan, January 30, 2000

“We believe the effect of the troubles in the subprime sector on the broader housing market will be limited and we do not expect significant spillovers from the subprime market to the rest of the economy or to the financial system.”
– Ben Bernanke, May 17, 2007
https://www.hussmanfunds.com/w mc/wmc170220.htm

It is simply remarkable what investors come to believe when they are not anchored in reason and mathematical objectivity.  Last week I showed that over the last several years: 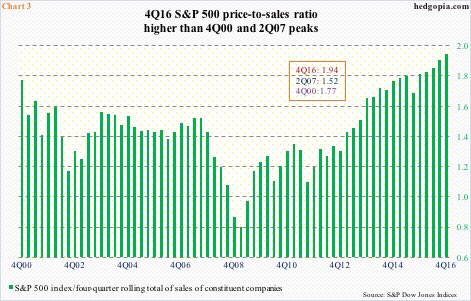 Yet when I mention these FACTS, the first reaction I always get is disbelief. This is, perhaps, an appropriate response to any opinion or forecast, however, when it comes to universally accepted FACTS, investors might want to check it out. What it tells me is that the vast majority of investors have no clue what the facts are. They hear a constantly repeated narrative that seems to suit them and don’t bother to look too closely or verify.
While to date it has been better to ignore these facts “When Speculators Prosper Through Ignorance”. It has been better not to be handicapped by them for a time. However, as the math of these unprecended conditions increasingly can not work and narratives change, or are shown to be false, ignorance may not work so well.
Most investors don’t even understand the facts of the past. What chance do they have in making good decisions about the future?

6 Key Questions For Investors At The Highest Ever Equity Valuations And Weakest Long Term Growth Since The 1930s Depression.

What if the rally in US stocks over the last 5 years was based on a false fundamental narrative and almost solely based on massive debt fueled intervention?

What if the returns of the last few years were a prepayment of returns for the next 12 years, with nothing left?
Are you going to ignore the expected return calculation that has been highly accurate for the last 50 years or so?
Is it a good time to increase your risk at the highest valuations in history, when long term growth in GDP, earnings, and revenues are the weakest since the 1930s depression?
Is it a good idea to have a static portfolio allocation approach when the expectation is for zero real returns for the next 12 years, or do you need to get creative?
Do you understand the different between Static and Tactical Allocation?
https://chrisbelchamber.com/pas sive-cycle-dynamics-2-simple- investment-transformations/